William Carson and his Mansion 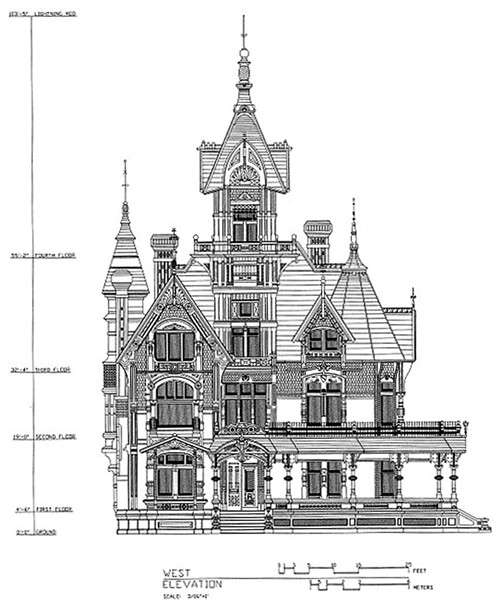 Public domain The 1885 front elevation by architects Samuel and Joseph Cather Newsom of San Francisco. It's close to — but not exactly — what you'll see today at the north end of Second Street.

"[The Carson Mansion] will stand as a monument to a life of unexampled energy and honest integrity.

It's hard to find anyone who had a bad word to say about William Carson on record, other than his usual uncomplimentary label — "lumber baron" — and the fact that he was a Republican. Other than that, in accounts from his contemporaries, he comes over as an enlightened employer who, for instance, voluntarily reduced working hours from 12 to 10, paid Christmas bonuses every year ($5 for married men, half that for singles), and who provided board for his workers where the meals "rivaled those of hotels." When 2,000 local lumber workers went on strike for better wages and working conditions in 1907, his company was unaffected.

Carson, a native of New Brunswick, Canada, arrived in Humboldt County in 1852 at age 27, having rounded Cape Horn three years earlier to join the California gold rush. For several years, his fortunes waxed and waned in the lumber industry until, in 1863, he shrewdly teamed up with John Dolbeer. The latter had just invented the donkey engine, a single-cylinder steam-powered winch that would revolutionize logging operations by towing large logs, like redwoods, out of the forests to skid rows, en route to the sawmills. The Dolbeer and Carson Lumber Co. thrived over the next several decades (keeping its name after Dolbeer's death in 1902), so that by the early 1880s, Carson had sufficient funds to be able to commission a mansion that would become "the most photographed house in America."

By all accounts, Carson gave his architects, Newsom Brothers, a free hand with the design. Redwood — the wood that had made Carson wealthy — was the obvious choice for the exterior, due to its ability to resist weathering and decay. But Carson also arranged to have quantities of tropical hardwoods imported from all over for the internal construction and decoration. According to Benjamin Sacks in Carson Mansion & Ingomar Theatre (Valley Publishers, 1979), Carson arranged for a schooner to bring nearly 100,000 feet of white mahogany (primavera) from Central America. In addition, shiploads of Philippine mahogany and Indian teak complimented the exterior redwood.

The house was built in 1885, a significant year for Eureka. While the nation was going through an economic depression, Carson's pet project provided work for many otherwise unemployed workers. In the same year, construction started on the County Courthouse, while John Vance gave Eurekans a glimpse of the future: the first electric lights in our part of the world. Less happily, a stray bullet fired during a clash between rival tongs killed a city councilman, leading to the expulsion — at 24-hour's notice under threat of hanging — of several hundred Chinese workers living in Eureka's Chinatown. (The area, between Fourth and Fifth, and E and F, was recently memorialized by dedication of Charlie Moon Way, after a man who remained in the county, protected by his employer.)

So what exactly is the style of the mansion? It's usually described as Queen Anne, which is a nice way of saying, "a bit of everything." You can also find architectural historians referring to it as "an example of flamboyant Victorian architecture, "the peak of the woodworkers' art," "eclectic," "peculiarly American," or, less kindly, "tortured ornamentation." Not forgetting, "gingerbread."

The ultimate put-down though, is what must be the first thought of many tourists seeing it for the first time, "Disneyesque." No surprise here: You'll find a replica of the Carson Mansion on the clock tower of Disneyland's train station.

Barry Evans (he/him, barryevans9@yahoo.com) fesses up: He's never been invited inside, so the foregoing is probably just sour grapes.