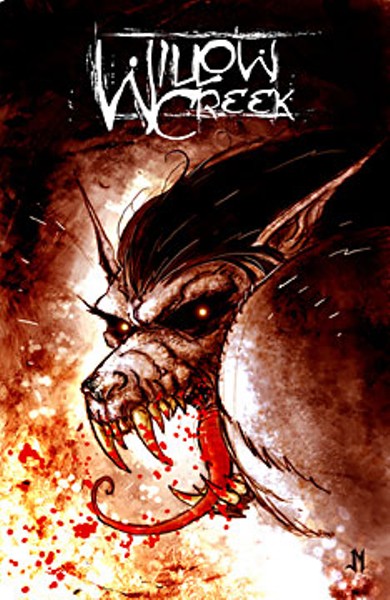 Mention the name Willow Creek and one thing immediately comes to mind: Bigfoot. If you've visited the area, you can easily imagine the stench-ridden man-ape living an elusive life in the surrounding mountainous forests as the townspeople happily go about their day.

When 33-year-old Los Angeles writer Christian Beranek visited the town in April 2007, a story that he had been developing finally took shape, and it all had to do with ... werewolves.

Beranek's name may be familiar to people who read comic books and graphic novels. He and his brother Adam co-wrote Dracula Vs. King Arthur and issue four of Se7en, a prequel to the hit film that tells the origin of killer John Doe with each issue being done by a different creative team. Dracula Vs. King Arthur, which received several positive reviews, enabled the writer to quit his day job and concentrate on writing comics, something he had wanted to do since he was a child.

"When I was growing up in Europe we used to buy comics in the PX stores on the military base," Beranek explains. "My first comic was a Batman digest. I was hooked, but it wasn't until I returned to the US and started taking creative writing courses in middle school that I knew I wanted to be a writer." That eventually led to his latest work.

Willow Creek is a five-part comic book series due out in February (with a special introductory issue in January), written by Beranek and Denny Williams and illustrated by Josh Medors (G.I. Joe and Runes of Ragnan). The seed for the tale actually came from Williams. "He wanted to tell a werewolf story that was classic," Beranek says, "but also had a few unique twists." The twists to this horror mystery story, which won't be ruined here, involve Bigfoot, the tourism industry, murder and a werewolf.

Beranek, on his trip to the town, found plenty of material to use in the story and discovered that the town was able to actually inspire much of the story. "When I visited Willow Creek, I found the Bigfoot lore to be fascinating. There is a sense of mystery in that town ... I have to think that there is some validity to the legend. Something was, or perhaps still is, out there." Beranek is also quick to point out that the area won't just be used as the comic's title ... it is the story.

"We stay true to the spirit of Willow Creek. I took a ton of photos, and we're incorporating the layout of the town into the book. I also did a lot of research into the Hoopa tribe as they come into play later on." When asked more about that "sense of mystery" he referred to earlier and how that affects the story, Beranek offered his take on the sleepy little town.

"There is that sense of friendliness," he explains, "but at the same time foreboding ... but we never portray the townspeople as evil. I may be giving part of the story away here, but the people of Willow Creek are there to help in their own way, but they have a vested interest in protecting the mystery of the woods, and our hero, Deacon McKay, [a big-city transplant who is the new deputy sheriff in town], will have to earn their trust before they reveal it to him."

Once the story was in place, it was up to the creative team to actually sell the book to a publisher. With horror stories, especially ones about zombies, being a big draw in the comic world these days, it seemed like the perfect project for a company to pick up. Beranek asserts, however, that Willow Creek is about telling a "good story" first and foremost, and the fact that it falls into the horror genre is "secondary." He does admit, though, that it was the horror aspect which helped sell the book. "[I]t didn't hurt [that it was a horror story]. And yes, zombie books are hot right now, but it is time for the werewolf to take over," he jokes.

The publisher that picked up the book was Zenescope, known for comics like Grimm Fairy Tales and Return to Wonderland. It was Beranek's first choice and he was very "happy when they agreed to do the project."

Since then he's been working "about a year on the marketing end," and that hard work has paid off not only in an eagerly anticipated comic book, but also in the fact that there may be a movie in the works.

"Willow Creek has not been optioned ... yet. [Though] there are several production companies interested," the writer reveals, "but we'll have to wait until after the WGA strike ends before we can act on any offers."

Movies based on comic books are standard box-office attractions these days, partly due to the fact that there is already an existing audience for them. So it's no surprise that this comic has production companies interested. The biggest problem for the publisher and creative team, though, is getting comic book readers and non-comic book readers to pick up the book before a movie ever comes out.

"[W]hat makes independent, non-superhero books appealing is that they don't have to follow the constructs of the spandex genre," Beranek points out, "and that is appealing to readers of literature at large." As Beranek sees it, comic books offer their own unique way of telling a story that readers can't get from any other medium. "It is dynamic and inventive. The pacing is deliberate. It has something else to offer [readers]." He is hoping these things, when coupled with the story, will be enough to spark readers' curiosity.

If they do, there is still one barrier for non-comic book readers to overcome. Many adults have the idea that comic books haven't evolved since the 1930s, and are an art form aimed at children. They couldn't be more wrong, as comic books now appeal to all age groups, and Willow Creek is no exception, though it shouldn't be mistaken for a book that is suitable for all ages. "I would label Willow Creek as a ‚Äòmature readers book,'" Beranek states. "There is a lot of violence, some cussing and a few shots of nudity. I would compare it to an R-rated film."

That should not hurt sales, however, as some of the best selling and most critically acclaimed comic books and graphic novels out there, such as 100 Bullets and Ghost World, are aimed at older audiences.

Now that Beranek is done with Willow Creek, he is moving onto other projects. He has a graphic novel with Belgium artist Mario Boon called Venice is Sinking coming out soon, and a one-shot comic book titled Unhappy White Girls. He also has "some projects in the works with Ahmet Zappa," which he is keeping secret at the moment.

With Willow Creek set to hit stores in February and studios looking to make it into a film, this may be the project that makes Beranek a household name and expands the public's knowledge of the town itself. Long famous in Bigfoot circles, Willow Creek may soon be known to general comic book and film audiences, too, and that will mean more exposure and, of course, more tourist dollars. And while the town may not have murderous werewolves (or even Bigfoot, if you believe the skeptics), it inspires the best in artists of all sorts, and this comic book series proves it.