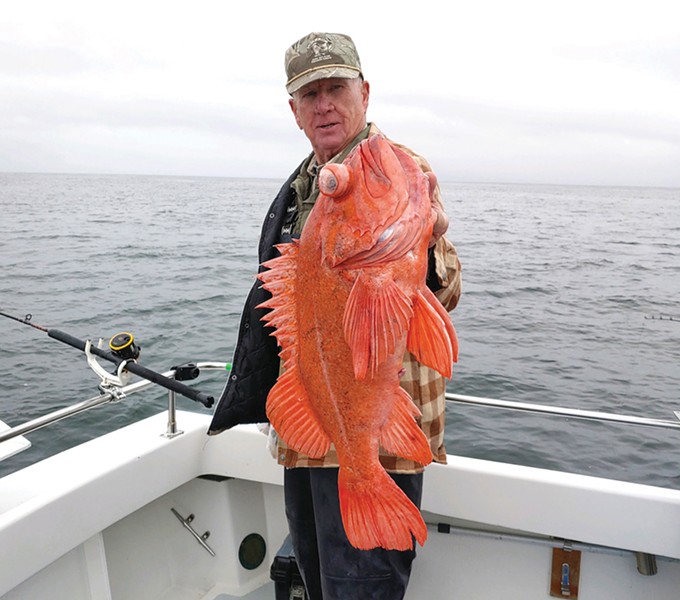 It's been a very quiet start to the saltwater season, especially for boats looking to head offshore. The north wind has been prevalent for almost two weeks, letting up just enough to allow boats to venture outside Humboldt Bay for a couple days. Trinidad, Shelter Cove and Crescent City have faired slightly better in terms of days on the water based purely on proximity to the fishing grounds. But even those fleets have been hampered by horrible conditions. Conditions aren't looking any better in the coming days. Thursday is marginal but then we're right back to gale force winds through at least Saturday. In the meantime, anglers anxiously await the California halibut action to ramp up. A few are being caught but it hasn't quite taken off. Bait is starting to show up in the bay, so we're getting close to having another solid alternative when heading offshore isn't an option.

Winds will weaken slightly Wednesday and Thursday before strengthening back to gale force Friday and Saturday. Friday, north winds will be 10 to 20 knots with northwest waves 9 feet at nine seconds. Saturday's forecast is calling for north winds 10 to 20 knots with northwest waves 10 feet at 10 seconds. Sunday's prediction is looking better, with northwest winds 5 to 10 knots with northwest swells 7 feet at eight seconds. These conditions can and will change by the weekend. For an up-to-date weather forecast, visit www.weather.gov/eureka/ or www.windy.com. To monitor the latest Humboldt bar conditions, visit www.wrh.noaa.gov/eka/swan. You can also call the National Weather Service at 443-7062 or the office on Woodley Island at 443-6484

Another quiet week for the Eureka fleet as the wind continues to keep the fleet tied to the dock. The brief weather window last Wednesday and Thursday provided hope for a good Pacific halibut and rockfish season. Boats fishing north on the 50-line in 300 feet of water did very well on halibut, with some limits reported. The boats that made the trip south to Cape Mendocino were rewarded with a variety of rockfish and quality lings. Thursday is looking like it may be fishable but the wind is forecast to return Friday and continue through the weekend.

Being close to where the fish are is a huge advantage for Trinidad boats and Capt. Curt Wilson of Wind Rose Charters has been making the most of tight weather windows. "We were able to get out Saturday and Tuesday in pretty tough conditions," said Wilson. "We've been staying close to home fishing outside of Flat Iron rock in 100 feet of water. The black rockfish bite has been wide-open, so it hasn't take much time to get everyone limits. The crabbing is still good, we're averaging 40 to 60 male keepers per pot," Wilson added.

After canceling trips over the weekend, Jake Mitchell of Sea Hawk Sport Fishing ventured out in rough conditions Tuesday in search of rockfish. "Conditions weren't very good but we made quick work of it," said Mitchell. "We made our way to the Old Man and put in limits of rockfish and lings and finished the day with 37 keeper crabs."

When the weather cooperates, the rockfish and ling cod action out of Crescent City has been excellent according to Britt Carson of Crescent City's Englund Marine. "I've heard the ling cod bite has been phenomenal," said Carson. "There were a few Pacific halibut caught last week, all under 50 pounds. Most were caught outside of the South Reef. A few boats have been trolling for California halibut off South Beach but they've all come up empty."

"The ocean out of Brookings has been rough, but rockfish and lingcod are still being caught on the nearshore reefs," said Andy Martin of Brookings Fishing Charters. "A few halibut were caught offshore during the brief break in the wind last Wednesday. Several salmon also were released by rockfish anglers the middle of last week. Salmon season opens June 12 out of Brookings, with hatchery silvers allowed the first week. King season opens June 19."

With very slow spring salmon fishing on the lower Rogue, most anglers have given up for the season, reports Martin. "The best action on the Rogue is the salmon fly hatch near Shady Cove, which is just beginning. The Chetco, Elk and Sixes rivers are closed but open May 22. Look for sea-run cutthroat trout on the lower ends when the rivers open. Tossing spinners is a good bet," said Martin.