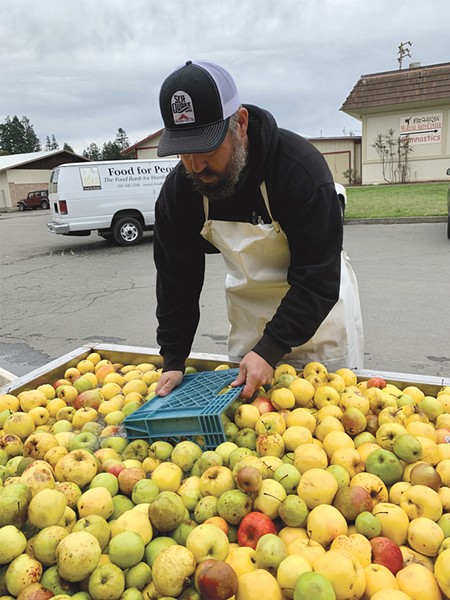 When life hands the farmers and home gardeners of Humboldt too many apples, many hand the excess to Food for People. Last year they donated some 57,000 pounds of excess produce and meat to the organization's gleaning program, according to Food for People, which redistributed the food to people in need. Some of that was produce that's unsaleable — bruised or too ugly for market — and some is from bumper crops that just couldn't be moved in time to remain fresh. And some came from the backyard trees of folks inundated with more apples than they could turn into sauce, pies, jellies and crisps.

And so the nonprofit, which operates 17 food banks around the county, partnered with Humboldt Cider Co. to turn the bushels of apples it couldn't store or send home with clients into a hard cider that will raise funds for the gleaning program. Starting Feb. 4, the cider producer's taproom in Eureka will be serving pints of Cider for the People, with a portion of the proceeds going to Food for People.

"I'm always scheming ways to keep gleaned produce out of landfill," says Alison Kenney, Food for People's local food resources coordinator and gleaning coordinator. Every week, she organizes volunteers to pick up produce that might otherwise go to waste. "This year was really killer year for apples and we gleaned over 16,000 pounds," she says. "Our clients were taking as much as they could eat and there was still an abundance of apples," more than it was possible to store. Carly Robbins, development director for Food for People, says the Choice Pantry facilities, like its largest at 14th and Summer streets in Eureka, have some refrigerated storage but not enough for all those apples. "We don't want anything to go to waste and we have a vested interest in making sure nothing goes bad," says Robbins. After all, it only takes one bad apple to literally spoil the bunch.

Kenney, who's been in her post for about a year, had gone to a conference in Seattle where she learned about the Seattle Cider Co.'s partnership with an organization called City Fruit that promotes urban orchards. Seattle Cider Co. took some of the apples that weren't fit for food banks but were still pressable and turned them into cider. "It kinda stuck with me," she says, "and come September, when we had this crazy over abundance here at Food for People ... I reached out to Humboldt Cider Co. and they were more than stoked." She says the nonprofit is always working toward zero waste and has previously sent leftovers to a hog farmer. The clients who visit the food pantries will always come first, she says, but now the fruit they can't use will also drum up funds for the gleaning program.

Transforming raw fruit into cider isn't as simple or speedy as turning lemons into lemonade, as Humboldt Cider Co. co-founder Michelle Cartledge explains. "We generally do it by the ton," she says. "So when people come to us and say, 'Oh I have a tree in my backyard,' in the beginning that was awesome ... but now we're on a larger scale, we need to work by the ton." The cider producer uses large-scale equipment at its Redwood Acres facility and there's still quite a bit of manual labor involved, which makes working on very small batches impractical.

"We wash all the apples, we put them into a wash bin and remove them manually. Then we put them into an industrial grinder ... the grinder reduces them to a pulp, basically a mush like applesauce," Cartledge says. That pulp is then forced through a shining, cylindrical bladder press (far more serious than the backyard variety) that separates out the liquid to be fermented into hard cider. The leftover mush — anywhere between 500 and 1,000 pounds of it — doesn't go to waste. Instead, it's either sent off to be used for compost or to feed pigs. The pressing, from receiving a ton of fresh apples to extracting juice, can take around a week's work. After that, the fermentation time varies from six weeks to a couple of months, depending on temperature, the sugar content of the apples and the resulting activity of the yeast.

The cider makers made an exception and worked with the half ton of apples brought in by Food for People and spent eight hours pressing and 24 days fermenting the 70 gallons of juice it yielded. With Gravenstein, Golden Delicious and a mixed bag of locally grown apples, Cartledge says, "This cider has more of a yeast-driven, apple skin flavor [and an] unfiltered profile to it."

The launch is set for Tuesday, Feb. 4, from 2 to 10 p.m. at the Humboldt Cider Co. Tap Room (517 F St., Eureka), when 10 percent of sales of everything on tap will go to Food for People. You will then be able to sample Cider for People there until the tap runs dry, with 17 percent of sales benefiting the very gleaning program from which the organization gathered the apples.

"This year was kind of a pilot for it and we got it going a bit late in the season," Robbins says, adding that if the partnership works out, Food for People would love to do it again. So far, everyone seems up for another round.