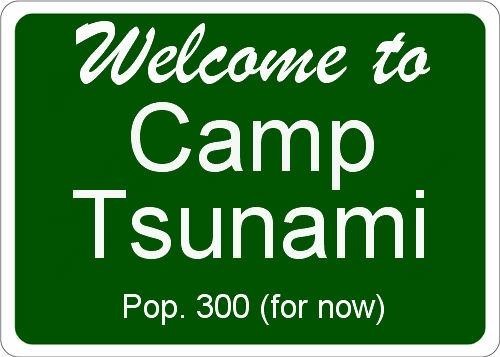 When the Eureka City Council unveiled a proposed Final Solution to the Homeless Problem at its Dec. 16 meeting, too many people showed up. Council Chambers had only enough room to accommodate around 200. Attempting to solve the problem, the mayor announced that down the hall there was a different, separate room where the extra attendees would have to go.

The different, separate room, known as Room 207, had its drawbacks — it was smaller and a ways distant from the meeting itself. Instead of watching the City Council do its business in person in council chambers, all of the "extra people" would have to make do with a single TV screen.

It was perhaps fitting that once city staff proceeded to discuss various proposals for extermina... — er, accommodating — Eureka's homeless population, the favored 'solution' involved herding them into a makeshift tent city on the Bayshore Mall's dodgy north parking lot.

Well, something had to be done. Whipping the council into a froth of Home-No-Phobia was Police Chief Andy "Ugg Boots" Mills, who recited the usual script of scary labels: They're mentally ill. They drink booze. They have dogs and criminal histories and *gasp!* shopping carts!

(Subliminal message: Residents who live in fixed-address houses aren't really a problem because they own lots of neat stuff, have to pay the cable bill and thus are more easily coerced by the Police State.)

Next up and wielding a PowerPoint slideshow to seductive effect, a planning department guy showed the council how it could cram 250 tents into Bayshore's abandoned northern lot, accommodating a population of around 300. Under this tantalizing proposal, the city would herd homeless dudes off the waterfront and out of the greenbelts, gulches and various backyards, and into an organized space.

Ah, but there's a catch.

As explained in a city-commissioned report prepared by Focus Strategies, it is the singular objective of the city to "reduce the number of homeless people in the community."

As any 10-year-old will tell you, logically, the number of homeless Eurekans can be "reduced" in one of two ways: One way being to provide them with actual housing, in which case one's "homeless" status vanishes.

The other way involves ... well, basically, turning them into fishbait.

Welcome to Camp Tsunami! Pitch your tent, park the shopping cart and stick around a while (read: until the next shaker). Then, adios.

Instantly clear to anyone who's ever driven down Broadway with its dozens of signs declaring certain death in all points west in the event of an offshore temblor, Camp Tsunami is now the World's Deadliest Parking Lot Homeless Camp.

Hey, if Mother Nature's next 7.2 is gonna get the job done, you gotta have a sturdy fence in place!

Can eat a pretty balanced and fulfilling diet consisting of nothing but Costco samples.

Or, if plated sit-down meals are more your style, we hear the Rescue Mission's fried chicken dinners are awesome.

You ever get nostalgic for the 1950s? Do you ever yearn for a time when such pesky issues as "gender equality" and "diversity" remained firmly, angrily — indeed, hatefully — stuffed in the closet?

Do you ever wish you could travel back in time — to experience a world before everything was LGBTQ-this, and gender-studies-that?

Thankfully, such a place still exists. To get a glimpse of the world in all of the gender-bigoted glory of yesteryear, one need look no further than the campus of Arcata's own Humboldt Segregated University.

Oh sure, gender-neutral access to bathrooms and locker rooms may be a protected legal right in California's K-12 school system, where any dude can express gender equality by waltzing into the girls' bathroom, or by lurking furtively around the showers of the cheerleaders' locker room.

But staying true to its white-bread, Eisenhower time-warp, HSU's on-campus student housing is still segregated according to outmoded sexual "norms," its housing website helpfully informing visitors that this housing wing over here is for Jane, while that one over there is for Dick, and bathrooms "are not co-ed," just like in the awesome, pre-Stonewall good old days.

In other words, we don't care how YOU choose to identify yourself. You wanna live on-campus at HSU? Well then you're gonna have to pull down your Levi's.

Gee, doesn't it just make you and your buddies Biff and Franky want to jump in the jalopy and cruise over to the malt shop so you can sexually harass girls dressed in poodle skirts?

As this column goes to press, we're working to confirm whether HSU faculty and staff are still pecking away on manual typewriters and dialing rotary telephones.

But what we can tell you for now is that although HSU makes a couple of token gestures to the 21st century — two WHOLE bathrooms and one ENTIRE locker room having been designated gender-neutral — the rest of the campus remains securely ensconced within the confines of repressive, phobic, Happy Days-era tyranny.

Never mind the warnings from HSU's own Eric Rofes Queer Resource Center, which designates gender-specific bathrooms as dens of harassment and violence against those who aren't gender normative.

When it comes right down to it, gender equality in public education pretty much terminates your senior year of high school.

Separate but equal, anyone? Well then, welcome to Humboldt Segregated University. Leave your gender-equality at the campus border, thanks.

Someone needs to pitch a new reality show to the History Channel. Alternating almost exclusively, as it does, between shows about quirky pawn shops, World War II documentaries and the exploits of various species of junk merchant, the channel is missing out on a big opportunity.

And it happens to be right in our backyard.

They could pull off a low-culture trifecta by launching a show called Nazi Pawn Shop. Internet auction site eBay forbids sales of Nazi memorabilia, positing that profiting off a stormtrooper's combat-tested bayonet might be, oh, a tad insensitive.

But if what you're after is that special Luftwaffe ribbon or SS infantry Iron Cross, a certain Eureka pawn shop has got you covered.

Pawn Stars, eat your heart out.

Curiously, the swastika-laden fare on offer at Eureka's Mein Kampf-approved junk shop haven't raised any red flags at the Eureka Police Department. By law, EPD receives daily inventory of all items traded by every pawn shop within city limits.

But let's not let something so silly get in the way of ratings gold.

Ryan Hurley is a Eureka-based attorney. Follow him if you dare: @BuhneTribune.