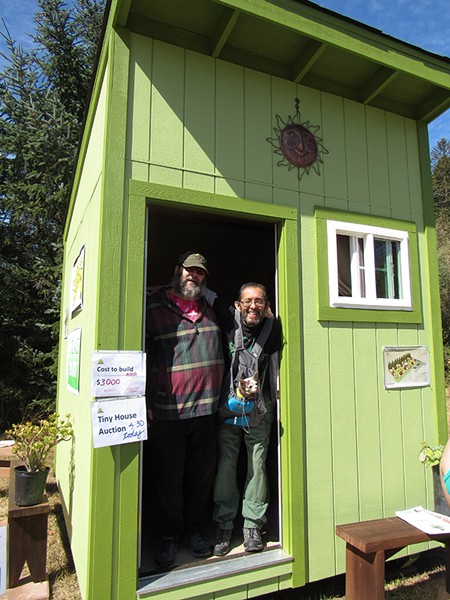 File Tiny homes, like this one on display at a Tiny House Expo in 2015 hosted by the Affordable Homeless Housing Alternatives, are a central component of the Housing Element update.

The Humboldt County Board of Supervisors voted unanimously, with Third District Supervisor Mike Wilson absent, on Aug. 20 to approve its Housing Element update, a bold new plan to address what county staff has identified as an affordable housing and homelessness "crisis."

Drafted by the county Planning and Building Department, the update is designed to govern the county's housing development over the next eight years. Past elements have repeatedly left Humboldt County well short of its target numbers of new units for low-income residents to the point that county staff reports that 70 percent of county residents cannot currently afford the median home price of roughly $310,000.

That's why, County Planning and Building Director John Ford explained, the new element takes bold steps, including provisions that could allow for tiny home villages, make it easier for homeowners to add second units and see the county become involved in the development and management of low-income housing developments.

At the Aug. 20 meeting, Ford told supervisors that the current update highlights that the "standard way of preparing Housing Elements, which is to identify a zoned property to build housing, has failed to work and that something different needs to be done." Ford went on to say that, under the new element, the county will start to step in to fill the gaps where the private sector has fallen short — hinting at a possible referendum on Article 34 of the California Constitution, which requires voter approval for local governments looking to fund low-income housing builds.

One of the implementation measures in the Housing Element update states that the county "shall support and actively lobby for state and/or local initiatives and referendums that seek the repeal of Article 34 of the state Constitution," which means a possible letter of support for repealing the article from the Board of Supervisors, according to senior planner Michelle Nielsen.

On Dec. 3, state Sens. Ben Allen and Scott Wiener introduced a bill seeking the repeal of Article 34 of the State Constitution.

"California must address its housing, affordability, and homelessness crises," Allen said in a press release. "And yet we have a decades-old law that creates an unnecessary roadblock for cities who are trying to do right by their constituents."

Article 34 essentially says local governments may not acquire or build any low rent housing projects unless they first get the approval of "a majority of the qualified electors." Article 34 has roots right here in Humboldt County. Back in 1950, residents of Eureka collected signatures to try and stop the building of public housing funded by a New Deal era program. The matter went all the way to the California Supreme Court, which ruled that Eurekans could not block the the housing development from moving forward.

But this triggered a fight and the California Real Estate Association stepped in to say that the building of public housing should be subject to a referendum because it contributes to taxpayer debt. The organization started a campaign to get a ballot initiative before voters. The campaign used rhetoric that mirrors that of today.

The association said public housing is a form of "socialism" and an attack on American capitalism. The campaign also used racial dog whistles, saying minorities were backing the building of the housing and that public housing that included minorities would bring down property values in the area. The initiative passed statewide and Article 34 of the California State Constitution was adopted Nov. 7, 1950.

But in today's context, the prospect of the county taking over building low-income housing has been seen as "thinking outside the box" and comes as one of an array of strategies identified to achieve the goals of the 2019 Housing Element, namely creating additional affordable housing throughout the county. If the statewide repeal passes, Humboldt County will "develop, construct or acquire low cost housing," according to the element. But if the repeal fails, then Humboldt County will look to bring forward a local initiative that would allow it to move forward with building and acquiring low-rent housing. Nielsen said a similar initiative brought forward in Eureka in 2016 passed, allowing the city to increase its limit on low-income housing from 250 units to 3 percent of the total housing stock in the city.

"Overall, [the Housing Element] represents a paradigm shift — if it is adopted as presented — from the status quo," Nielsen said during the Aug. 20 meeting. "It moves the Planning and Building Department to an active partnership with private sector developers and the community developers."

The Housing Element identifies the need for 1,413 units in the unincorporated areas of Humboldt County. The majority of those — 830 — fall in the "very low" to "moderate" income categories with 583 identified in the above "moderate" categories. The need projections are generated by the state and the Housing Element puts forth four main strategies to meet them.

The first states the county will be "proactive and a partner for housing developments." In her presentation to the board, Nielsen said this means the Planning and Building Department will "fast track" all housing projects and establish tight timelines for the issuance of permits, as developers have long pointed to permitting delays as a factor that drives up the cost of construction.

Second, the county will "respond to the needs of people experiencing homelessness, at-risk and transitioning out of homelessness." Nielsen said this means zoning regulations will be updated and modified to allow more shelters, including in the rural areas of Humboldt County.

Lastly, the county will "increase the diversity of housing forms to provide for more entry level housing." This means amending zoning regulations to allow tiny homes as well as the construction of accessory dwelling units, commonly referred to as mother-in-law units. During the Aug. 20 meeting, Fifth District Supervisor Steve Madrone said the Housing Element update will allow a straightforward process that eases past restrictions on new builds and addresses a housing crisis that he called "an incredibly serious problem."

"[The Housing Element] is creating a whole lot of new opportunities for landowners," Madrone later told the Journal. "It's a great plan."

He said the element will allow for more small-scale construction though it will be a few more months before the plans contained within the Housing Element are implemented. Madrone went on to praise the efforts of the Planning and Building Department for helping address a "backlog of need" when it comes to meeting the housing needs of the residents of Humboldt.

The nonprofit Affordable Homeless Housing Alternatives, which has long lobbied for creative solutions to the county's housing crisis, applauded the board's vote to pass a plan that, in addition to tiny homes, also includes provisions for a sanctuary parking program and campground.

"I think we all know these options will be helpful and I'm very excited about having some change," AHHA board President Nezzie Wade said in a press release.

Before any implementation of the Housing Element update can begin, the document has to first be certified by the California Department of Housing and Community Development. Nielsen said there is no set timeline for this but that the Planning and Building Department hopes to get a number of ordinances dealing with tiny homes and accessory dwelling units to the Board of Supervisors before year's end. There are also a number of workshops that the Planning and Building Department will host to help educate the public on the proposed ordinances.

"We are going to continue to use Notify Me," Nielsen said, referring to the county's electronic notification program. "If people want to receive notifications about upcoming workshops, their best bet would be to subscribe to that tool."