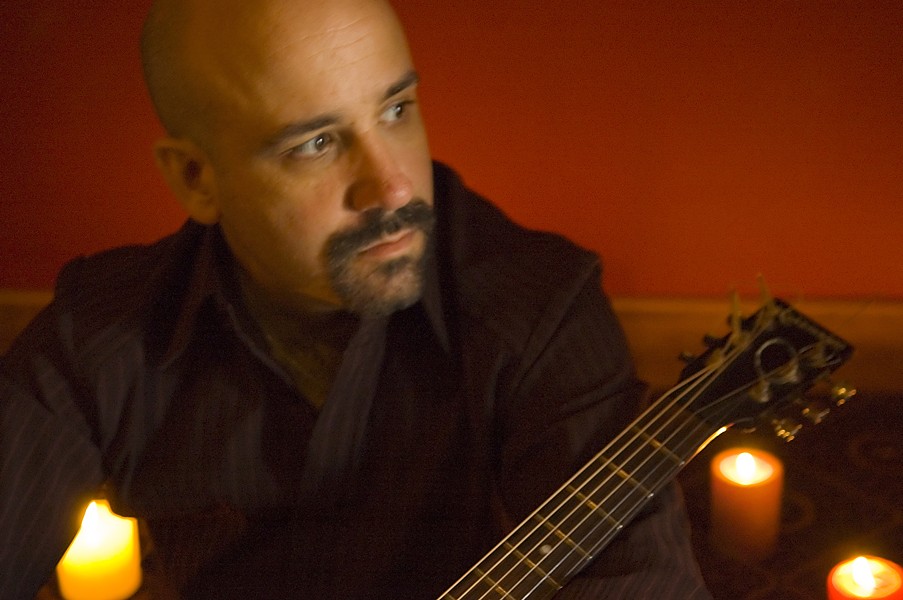 The note from the Arcata Playhouse starts with the words "banjo wizard." It goes on to describe the wizard, Tony Furtado, as a slide guitarist, but that doesn't really do justice to the breadth of his music currently. It's true he started out as a teenaged banjo prodigy, a picker who won national bluegrass competitions and recorded with the likes of Allison Krauss and Tony Trischka and was part of Laurie Lewis' band Grant Street. By the end of the '90s he was living in Colorado and fronting what he described at the time as "one of those crazy Boulder bands," exploring the edges of neo-stringband wildness in the early stages of the jamband era.

Pushing the banjo envelope, he started playing with a slide, crafting an unusual blues-banjo style. The slide led him into Ry Cooder-esque guitar work and he took that sound in new directions while touring relentlessly. At some point he landed in Portland, first as a place to leave his stuff while on the road but then as a real home. That didn't stop him from roaming with his music.

"I don't think I could ever be happy staying in any one place musically," said Furtado. "I can't imagine doing the same thing year after year after year -- I don't know how people are able to do that. I've always had that attitude of just going with whatever inspires you rather than sticking to any one influence, and I still approach things that way."

His latest album, Golden, melds all of the above, shifting effortlessly from banjo ruminations to slip-sliding guitar on tunes such as "Portlandia" (named for the statue, not the TV show).

The special opening act for the Sunday Tony Furtado Band show at the Arcata Playhouse is the Melody Walker/Jacob Groopman duo. After finishing her music degree at Humboldt last year, the melodious Ms. Walker returned to her Martinez roots, drawn to the Bay by Jacob, who plays in The Real Nasty but is not a nasty sort at all. They've been working on Melody's tunes and recorded a few for a demo in advance of a full-on album, financing it via Indiegogo.com, which is something like Kickstarter.

Thursday, being May 5, is aka Cinco de Mayo. HSU's Lambda Theta Phi, Latin Fraternity, Inc. is celebrating with a party at the Jambalaya with their own DJ Khem, plus Some Of The Truest, a semi-political Mendo hip hop crew whose latest, Herb-N-Warfare, on Drying Shed Records, gives you an idea where they come from. Then it's Humboldt's Fresh Coast Connection with the chameleon Berel Alexander shifting into rap mode. In case you haven't heard about it, Berel and his Ensemble are doing the Kickstarter thing, trying to raise enough online to buy a biodiesel van for touring and to produce a CD and, if the cash really flows, some old-school vinyl. They'll be recording over the summer at The Zoo in Oakland.

Also on Thursday, a triple bill at Humboldt Brews starting with the Arcata power trio Dynamite Sweater. This could be their farewell performance since they're threatening to move to Portland, where their dry humor may be better understood. They open for the one-two punch of Thicker Than Thieves and Perro Bravo.

Barreling out of Pacific Beach, the Thieves have been mixing beach-friendly genres since before the turn of the century. "There wasn't really anyone in San Diego at that time who was doing what we were doing, mixing reggae, ska and punk rock, other than Sublime and Buck-o-Nine," said TTT vocalist Jamin Hazelaar. A few years back, while hanging in Costa Rica, they met Miguel, who produced records for Sublime and played lead guitar on "What I Got." They clicked and TTT ended up on a joint tour with his band Perro Bravo, which also includes drummer Greg Lowther from the infamous Long Beach punk band Falling Idols. More recently TTT has been in the studio with Miguel recording, among other things, a version of the Clash classic "Guns of Brixton." So, "How you gonna come?"

This just in from my man Andrew, "Got a call from 'Lil Red Lion. They said they're having TEN BANDS on Thursday. But they weren't sure of ANY of the names yet. So, yeah."

Another week, another tribute band: This time it's a Friday Bonus show at Arcata Theatre Lounge with The Iron Maidens, "the world's only female tribute to Iron Maiden." They promise covers of IM material "from all eras of the band's career, encompassing the biggest hits as well as fan favorites," and a stage show including appearances by "Maiden mascot Eddie, the Grim Reaper, the Devil and more." I don't know who Eddie is, and I can't name even one Iron Maiden hit, but the girls sure look tough and cool. Local rapper/headbangers White Trash Country Club open the show.

Meanwhile at the Arcata Alibi, Nipplepotamus opens for Strix Vega, another local outfit planning on laying down some tracks soon. "The middle to end of June we'll be down at Hyde St. Studios in San Francisco recording our next album," says bassman/keyboardist Andy Powell. "We'll miss seeing the redwoods while recording, but the studio is a great one and we just couldn't say no when they invited us down. Maybe the city edge will add something to the recordings, who knows? We are glad to finally start getting to work laying down some of our newer songs that you've been hearing at our shows."

Ramble John "RJ" Krohn, aka RJD2, plays his brand of instrumental alt. hip hop Saturday night at the Eureka Theater. Based out of Philly, RJD2 first made his mark producing and recording for the cutting-edge Definitive Jux label. He's since gone on his own with RJ's Electrical Connections moving things forward on albums like The Colossus. Good stuff. The That's How We Roll show also features Reba's fave, Ivan Ives, plus Burnell Washburn, DJ Dub Cowboy and dancing by the lovely Luna Moon. After party at the Red Fox.

Also from Philly, but on the grime/dubstep side, is PJ Geissinger, aka Starkey, who shares a World Famous bill at HumBrews Saturday with Nasty Nasty.

More metal Monday at the Arcata Alibi from Pasadena's Gypyshawk, who describe their sound as "like the bastard child of Thin Lizzy and Lynyrd Skynyrd raised up by Motorhead." Guitarist Andrew tells me, "I pretty much just play rock 'n' roll and it has something to do with the economy, my mediocre UC education, and because no one is paying me to write or do anything else I wouldn't feel is a pathetic use of my time. I'd like to get into the pawn business or arms trade, but I'm too busy doing PR and booking for my rock 'n' roll life. All or nothing."

As noted in Muse, the David Grisman Bluegrass Experience plays Sunday evening at the Van Duzer. Earlier that day you can warm up with bluegrass by The Compost Mountain Boys, who play a Mother's Day show at 1 p.m. at the Westhaven Center for the Arts. Take your mom.

The amazing old time guitarist, banjo picker, fiddler, 78 rpm-DJ Frank Fairfield returns to the Jambalaya Tuesday night. I'm told the last time he played there the crowd was more attentive than when I saw him play the Jam, an experience that led me to join a Facebook group called "Shut the F@k up the band is playing." Let's hope this listening trend continues.