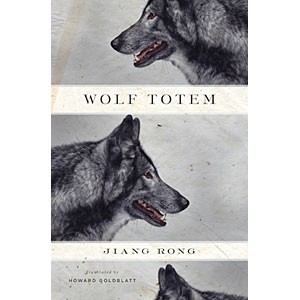 Wolf Totem, winner of the first annual Man Asia Literary Prize (inaugurated last year as an Eastern version of Britain's Man Booker), may be the most internationally recognized Chinese novel since Gao Xindan won the 2000 Nobel Prize in literature. As many Chinese will quickly point out, however, a Chinese has never won a Nobel. Gao received his honor as a French citizen.

The literature Nobel has been a kind of spectre haunting Chinese letters, dating back to an old rumor that Lu Xun, the country's most celebrated modern writer (died 1936), was going to be nominated but declined, allegedly, because he felt no one from what he and other critics called a "weak and backward country" deserved such an honor.

Jiang Rong's long novel of young Chinese men living among nomadic Mongol tribes during the Cultural Revolution (from the mid-'60s to mid-'70s) often broaches this "weakness." As protagonist Chen Zhen learns about wolves, war and farming from the wise Papa Bilgee on a fictionalized grassland of Inner Mongolia, he frequently (and unfavorably) compares the rough and peripatetic Mongol way of life -- religiously inspired by the spirit of the Wolf -- to the peaceful, agricultural society of the Han Chinese. The Mongols, Chen comes to believe, have superior strength and wits, thanks in no small part to their devotion to Tengger (Heaven, or God), the grassland and the wolves.

Jiang's sermons inciting the Han to be more like the Mongols get tiresome after a while, but when he sticks to the wolves the book is riveting. Most of the novel is devoted to the ongoing conflict between human and wolf, and Jiang's description of the animals' military strategy is remarkably engaging. Chen decides to steal and raise a wolf cub in order to fully understand the creatures, but what emerges is a conflicted reality: The wolves and the Mongol sheep herders are mortal enemies, yet symbiotic stewards of the grassland; Chen's choice to keep the wolf cub leads to both insight and anguish.

In the book's epilogue, Chen and a friend revisit the grassland, most of which has been replaced with modern housing where former farmers have Jeeps and cable TV. No one would call today's China "weak and backward," but Jiang clearly wants his readers to consider whether things are moving in the right direction. The country's literature certainly is: Brothers, another Chinese novel, is a favorite for the Man Asia this year. No word on the Nobel.