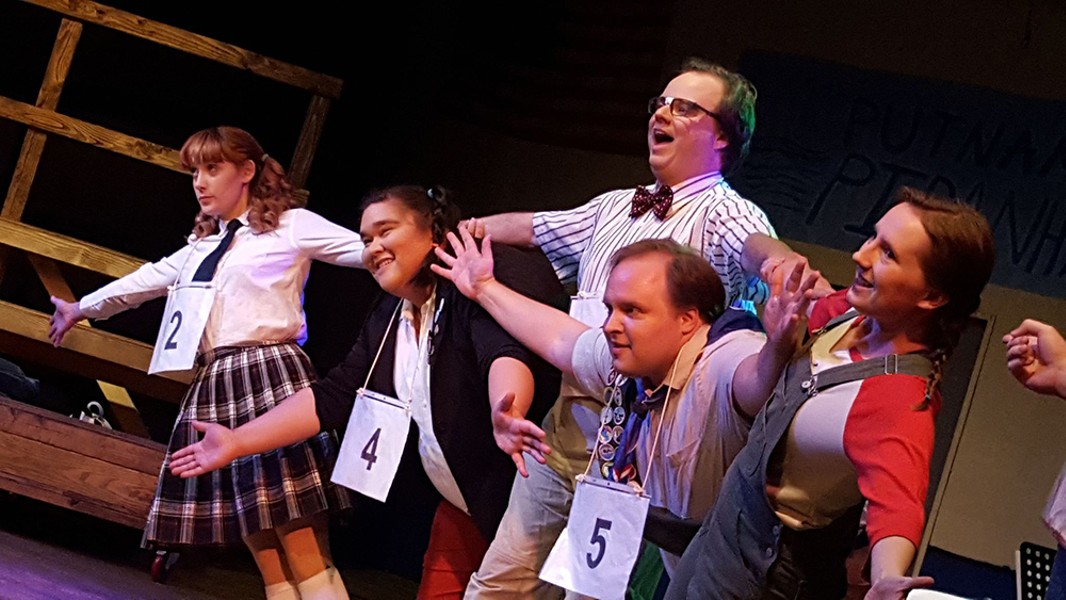 As a young boy, I lost a classwide spelling bee on the word "broccoli." My teacher said I spelled it with two 'l's (I didn't, and I will die on that hill if I must). So when Chip Tolentino (Evan Needham) was eliminated on "tittup" in The 25th Annual Putnam County Spelling Bee, I empathized. Even if I was laughing at his inopportune pubescent erection.

On its face, the play is as simple as the title. It tells the story of six adolescents competing in a county spelling bee, the last stop before the national competition. There's Charlito "Chip" Tolentino (Evan Needham), the defending champion and accomplished Boy Scout; Leaf Coneybear (Ethan Vaughn), homeschooled hippie spawn and the most ... innocent of the group; William "it's pronounced Bar-FAY, there's an accent aigu" Barfee (Tyler Egerer), a determined and surly speller with a mucus membrane disorder; Logainne Schwatrzandgrubenierre (Tina Toomata), the youngest and most politically aware of the group; Olive Ostrovsky (Jessi Shieman), the only quirk-less character, who instead has absentee parents; and Marcy Park (Marguerite Rose Hockaday), a burgeoning polymath who is, like the Trump campaign promise, "tired of winning all the time." Running the show is ace realtor, returning moderator and previous Putnam County bee winner Rona Lisa Peretti (Andrea Zvelako). Douglas Panch (Mathew Lewis), the vice principal who is returning from a five year "hiatus" after an "incident" at the 20th annual bee, serves as word reader, while Mitch Mahoney (Alex Blouin, who also lends the show her considerable skills as a choreographer), is a criminal fulfilling his community service as a comfort counselor. Mitch comes stacked with juice boxes to hand out to the losers.

But there's a twist. Before each performance, four members of the audience are chosen to participate in the competition and are brought on stage after almost no preparation. They get a nametag slapped on them and occasional whispers from the cast. That's it. The show also contains no small amount of improvisation, primarily on the part on Vice Principal Panch. Panch, rigidly deadpan until he gets upset, proffers strange or shockingly simple words to the audience contestants and gives equally odd or unhelpful sentence usages when asked. One audience member, Emily I think, was asked to spell "cow." She asked for the definition, Panch said, "It means a cow." She asked for the word to be used in a sentence, Panch replied, "Please spell the word 'cow.'" You get the picture.

If there ever was a fourth wall in The 25th Annual Putnam County Spelling Bee, the players tore it down well before dress rehearsal. Before the show begins, a cast member ambles around the audience greeting folks and repeatedly blowing into the microphone to make sure it's on. Early on in the show, Olive, during her first soliloquy, actually makes someone in the audience move because they're "sitting in my Dad's seat." And everyone claps each time one of the contestants spells a word correctly, even those who are cast in the show. I don't know when we all agreed to do that — it just sort of happened.

Thanks to director Nannette Voss' guidance, the show sucks you in and you forget that you're watching a bunch of people who just voted in midterm elections play 6 and 11 year olds. You forget that William Barfee doesn't have a "magic foot" and that, even if he did, it couldn't help him spell "hasenpfeffer." There's a Christopher Guest-ian charm to the show, wherein strange people serious about a strange undertaking demand your empathy by being so unabashedly their strange selves. The silliness (and occasional raunch) forces you to open your heart and the actors embody their young caricatures with a tenderness you don't generally see in satire.

The audience inclusion and sporadic improv makes the show feel volatile, like a different kid could win each time, and even a bit slapdash. Some of the musical numbers feel disorganized and on opening night, a couple of the actors had trouble singing over the live accompaniment. After the show, I found myself wishing it had not been a musical at all. But I realize these are minor carps about an opening night.

If you like to laugh, spell or are one of those rare birds who enjoyed middle school, clear some time on your schedule and plop down onto NCRT's fine red velvet chairs. Who knows, you may just become part of the show. There's a juice box in it if you do.

The 25th Annual Putnam County Spelling Bee runs Fridays through Sundays until Dec. 9 at the North Coast Repertory Theater. The shows on Nov. 30 and Dec. 7 are "adult shows" featuring stronger language. Parental guidance is recommended for children 13 and younger for all shows. Call 442-6278 or visit www.ncrt.net.

Redwood Curtain Theatre's excellent Ripcord, a battle of wills between polar opposite roommates at a retirement home, plays through Saturday, Nov. 17. Call 443-7688 or visit www.redwoodcurtain.com.

You've only got one weekend to see Main Stage Musicals' production of Oliver! at the Arkley Center for the Performing Arts. The urchins will be picking pockets and hitting high notes Nov. 23-25. Call (800) 838-3006 or visit www.mainstagehumboldt.com.

'Tis the season for Dell'Arte's holiday show. This year Around the World in 80 Days makes its trip across the county at various locations from Nov. 23 through Dec. 16. Call 667-3631 or visit www.dellarte.com.