Words of Wisdom, plus a Parisian busker, Dr. John and the Lu'au 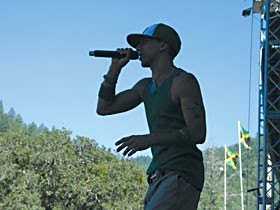 The first time I met Tevya "Wisdom" Jones, years ago, he was selling T-shirts along the road into Reggae. I bought one emblazoned with his logo -- a red, green, gold and black pyramid/eye inside a flaming circle. The next year, stickers with the logo showed up on outhouses all over the concert grounds. A couple of years later, Wisdom had incorporated as Wisdom Creations, and had a booth inside. Before long his company had become an event sponsor. Along the way, the multi-tasker also showed up onstage, rapping with various hip-hop acts. Last year he had his own set, backed by the Wisdom Creation Band . He returned this year, again as a sponsor and performer, adding MC to his duties. In between all that, he managed to carve out a few minutes to chat about his music, in particular the "conscious" nature of his message.

What is this "conscious" music?

"It's talking about being in states of darkness, states that are less than perfect," he began. "We all have our ups and downs, highs and lows. My music talks about how I manage to navigate those paths with the goal of reaching the light or a more positive aspect, which is how I like to live life, not looking at the negative and why things don't happen, but figuring out how positive things can happen. That's the path I take. That's how I try to use my music. Everything isn't necessarily positive, but it is conscious. There's a difference. All of life is not positive, but it can be good. It's all in your perspective of your mind. I try to talk about what's going on with the government, what's going on with the people.

"The next album we're doing is called Full Spectrum . It's so ingrained in us right now to be angry and have fear, so everyone is building walls. The whole purpose of what we're doing is to open people up, open their hearts, break down those walls."

Wisdom and the Wisdom Creation Band play at 3:30 p.m. Sunday, Aug. 26, at the Organic Planet Festival at Eureka's Halverson Park. The all-day event also includes Cajun music by the Bayou Swamis (at 11 a.m.), reggae by Prezident Brown and the Solid Foundation Band with special guest Andrew Diamond (1 p.m.), and tight T-ed, crowd-pleasing blues guitar shredder Tommy Castro and his band (at 5:30), along with lots of organic business: food (another really big organic salad), speakers, stuff like that, plus fun for kids, a parade, clowning by The Freelove Circus . You get the picture. Did I mention it's incredibly inexpensive? It is.

When she was a teenager living with her mother in Paris, Madeleine Peyroux took up with the street musicians busking for change in the Latin Quarter, first singing with the Riverboat Shufflers, then the Lost Wandering Blues and Jazz Band, who specialized in American jazz, covering artists like Ella Fitzgerald and Billie Holiday. Her first album, Dreamland , recorded in 1996 with a crack team of jazzers, included covers of songs Billie made famous, as well as songs by Patsy Cline and others, mostly sung with a Billie-esque inflection. She toured the country with the Lilith Fair tour, and even visited Humboldt, opening for Cesaria Evora. The album and the tours received rave reviews from the critics, but she wasn't ready for it. She disappeared for years, apparently returning to busking. She resurfaced after the turn of the century, eventually recording a second solo album, Careless Love , another critical hit that went platinum.

Peyroux's latest, Half the Perfect World , named for a Leonard Cohen song, is her best yet, focusing more on relatively modern songwriters. Songs on the record include a fine version of Tom Waits' "(Looking for) The Heart of Saturday Night" and a sublime take on the Fred Neil classic, "Everybody's Talkin'." Billie's distinctive way of sliding around a note is still there, but now Madeline has absorbed it and made it her own. Peyroux plays Tuesday, Aug. 28, at the Van Duzer; Tennessee-born guitarist/vocalist Doug Wamble opens the show.

It was 1968 when New Orleans-born guitarist turned piano man Malcolm "Mac" John Rebennack Jr. wrote a song called "Gris-Gris Gumbo Ya Ya," declaring, "They call me Dr. John, known as the Night Tripper," borrowing the name from a 19th century voodoo practitioner. Wearing feather head-dresses patterned after those worn by black Mardi Gras Indians, Dr. John laid down steamy N'Awlins funk, growling over the music with tales of magic potions and a witchdoctor's ability to "Walk on Gilded Splinters" with the King of the Zulus. And thus began phase two of the career of a musician who'd been a session player of renown, working with the likes of Sonny and Cher and Van Morrison. In the '70s he worked with Allen Toussaint and The Meters to create In the Right Place , the closest thing he had to a hit album, thanks to the song "Right Place, Wrong Time."

Post-Katrina, the good doctor has become an unofficial musical spokesman for the city he calls NOLA, supporting the New Orleans Musicians Relief Fund and other such organizations. Dr. John andThe Lower 911 are out west on tour this week, playing a few festivals (including the Strawberry Music Festival next weekend) and a few concert dates, including a show next Wednesday, Aug. 29, at the Mateel, where local bluesman Earl Thomas and The True Gospel Singers open. If the music of New Orleans is your thang, be there for a desitively bonnaroo experience.

You remember "Groovin'," "Good Loving," "People Got To Be Free," all those '60s hits by the Young Rascals. Flash back on Saturday, Aug. 25, as Felix Cavaliere's Rascals (apparently no longer young) play Cher-Ae Heights Casino.

Speaking of flashes from the past, RBS Syndrome is reuniting for a show that same night in the Kate Buchanan Room.

Now on its tenth year, KMUD's annual Lu'au has moved from Benbow to Garberville's Southern Humboldt Community Park, becoming Lu'au in the Park . The Saturday event starts with a deep pit Hawaiian feast (kalua this and that) followed by a Slack Key Guitar Fest featuring three top musicians from the Islands: Martin Pahinui (son of the legendary Gabby Pahinui), a fine vocalist and master of the 6-string slack key guitar, Aaron Mahi , bass player from the Royal Hawaiian Band, and another slack key master , George Kuo , who plays 6- and 12-string guitars.

If the music and food isn't enough for you, the station's Hawaiian music deejays have a grander plan: healing the rift in SoHum. As explained in their press release, "In ancient times, Hawaiians gathered together for three days in ceremony "to make right" called Ho'oponopono . When problems in extended family units, called Ohana , reached a level of inescapable severity, a pig would be raised, sacrificed, cooked and sent home to the many households for use as a sacred feast of thanksgiving after a wrong was righted. The modern day Lu'au has its roots in this ancient Hawaiian psychotherapy. KMUD's Lu'au once again asks all to gather together in feast and song to help heal and perpetuate KMUD's Ohana, its family and its diverse community." Sounds good to me.

For those who avoid concert halls and sunny festivals, we have music in a few nightclubs: Thursday, Aug. 23, local politi-twang-punks Henpecker open a show at the Boiler Room that features Eugene-based "grassroots blast furnace" Sid and Fancy , here for a three-city run. Friday S&F head to Six Rivers to share a bill with The Rubberneckers . Saturday they hit Arcata for a Jambalaya show with Rooster McClintock .

Melody tells me the women's open mic Menstrual Mondays is resuming at Muddy's. Yes, I'll make it one of these days.

But for real heaviness, hit the Alibi Tuesday, Aug, 28, for a blast of Irish punk from County Cork by Hope is Noise, on tour with San Diego's dark, angular Hostile Combover, with Dragged by Horses adding the final crushing bit of weight to the affair.

One more thing: The Vista is back, I guess in the side room of Go Fish, the restaurant that took its place. First show is Saturday with Xrin Arms and Same-Sex Dictator . More to come. Watch this space for details.