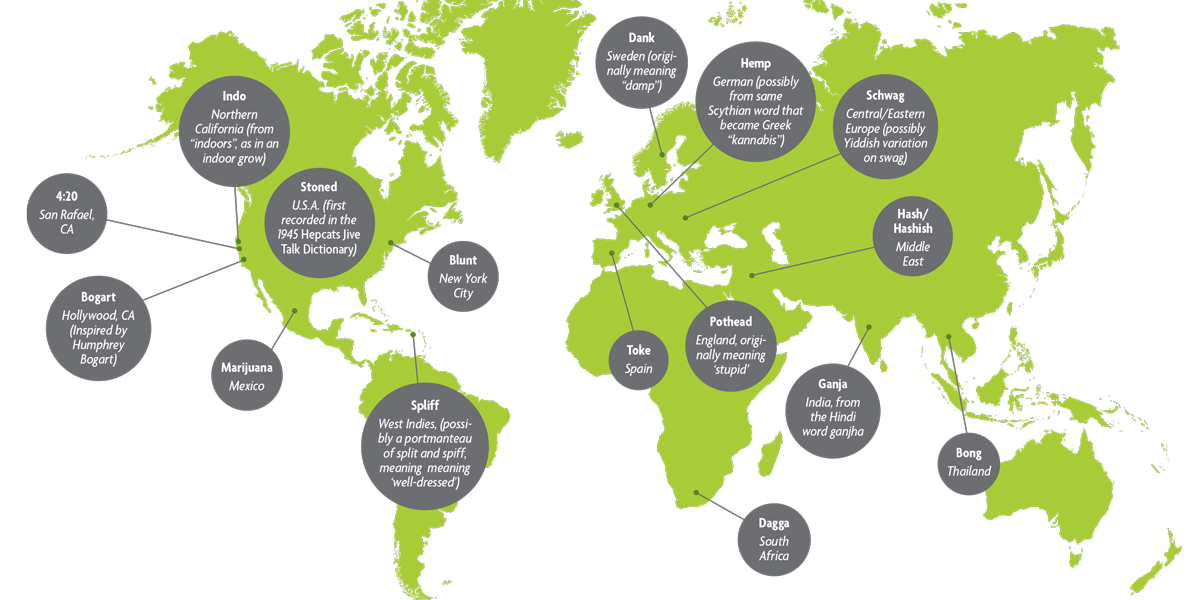 After Grant Scott-Goforth's parting shot last week debunking the racist connotations of the word "marijuana," it seemed only fitting to follow up with another column blatantly pandering to the etymology nerds in our readership. We were initially intrigued by the word "bong," which, according to an online etymology dictionary, comes from the Thai word "baung," meaning "cylindrical wooden tube," and came to the United States along with returning Vietnam War veterans.

As we dug deeper into the words that surround cannabis connoisseurship, a pattern developed. Marijuana's English lexicon borrows many words from across the globe, not just for strain names (Acapulco Gold, Thai stick), but also for the actions of cultivating, preparing and appreciating the herb.

First, the almighty influences of Greek and Latin, from which we get the genus name Cannabis. Cannabis became officially attached to the plant in 1728, but "kannabis," a Greek word derived from ancient Scythian, dates back much further, first entering written use with Herodotus, who described the woven hemp clothes of nomadic Scythian tribes around 450 BC. The Greek root found its way into many different languages across Eurasia, including Persian (kanab), Albanian (kanp) and English (canvas).

Words for varieties, cultivation techniques and quality of weed have a wide pedigree. That "dank-ass" weed you smoked last night owes its vivid description to Old Dutch, and the same root word from which we got "damp." "Joint" comes from the French word "to connect," a handy thing to remember the next time you're licking the edge of a Zig Zag. Both "hashish" and "keef" are derived from Arabic, with the former being an extension of "herbage or hay" and the latter resembling the word "kaif," meaning pleasure. "Dagga," which shares its meaning with a Jamaican dancehall trend, is derived from the mutilation of the South African Khoikhoi word, "dachab," by Dutch Afrikaans colonizers.

Unsurprisingly, Jamaican culture has had a lot of influence on pot culture. "Blunt" is believed to have originated among Jamaican immigrants in New York City, who in the 1980s used the sturdy Phillies Blunt brand cigars to disguise the smell of wafting ganja from the police. The origins of "dub" are dubious, but it did enter the vocabulary along with Jamaican dub reggae in the 1970s. Its roots may be even older, with the first citation appearing in the 1967 book Narcotics & Hallucinogenics by J.B. Williams, saying that "dubbe" is "Negro slang for a marijuana roach." "Dubbe" may be the patriarch of dub, dubstep and your parents' wince-inducing use of "doobie." Sadly, tracking the etymology of many words introduced by the African diaspora is difficult, as many from the last century entered our dictionaries only post-appropriation by white audiences.

It seems that we do finally have a satisfactory origin story for 4:20, which as it turns out is not a police code nor the number of chemical components in tetrahydrocannabinol, but the customary meeting time for a clique of San Rafael high school students in the 1970s, who were looking for an abandoned marijuana grow near the Point Reyes Lighthouse. They never found it, but history found them.

Finally, one cannot overstate the contributions of the Spanish language and Mexican culture to marijuana slang. "Toke" is believed to be derived from "tocar," meaning "to hit/touch." "Sinsemilla" means literally "without seeds." "Reefer" may come from either the shape of a well-rolled sail or a corruption of the word "grifo," meaning, roughly, "pothead." And, coming full circle, marijuana evolved from the Mexican Spanish plant name "mariguan," with some suggesting the name Maria Juana led to its present form. Its use was popularized by its appearances in newspapers owned by infamous timber baron and promulgator of yellow journalism William Randolph Hearst.

I don't think we should stop using it — language, like culture, is much stronger for diversity and inclusion. Let's make it bigger. With much love to my fellow word nerds, I would like to enter Hearst into the lexicon. The next time someone steals your stash and then pretends to help you look for it, call it "hearsting."