Yes for 2 Earths and Idiots 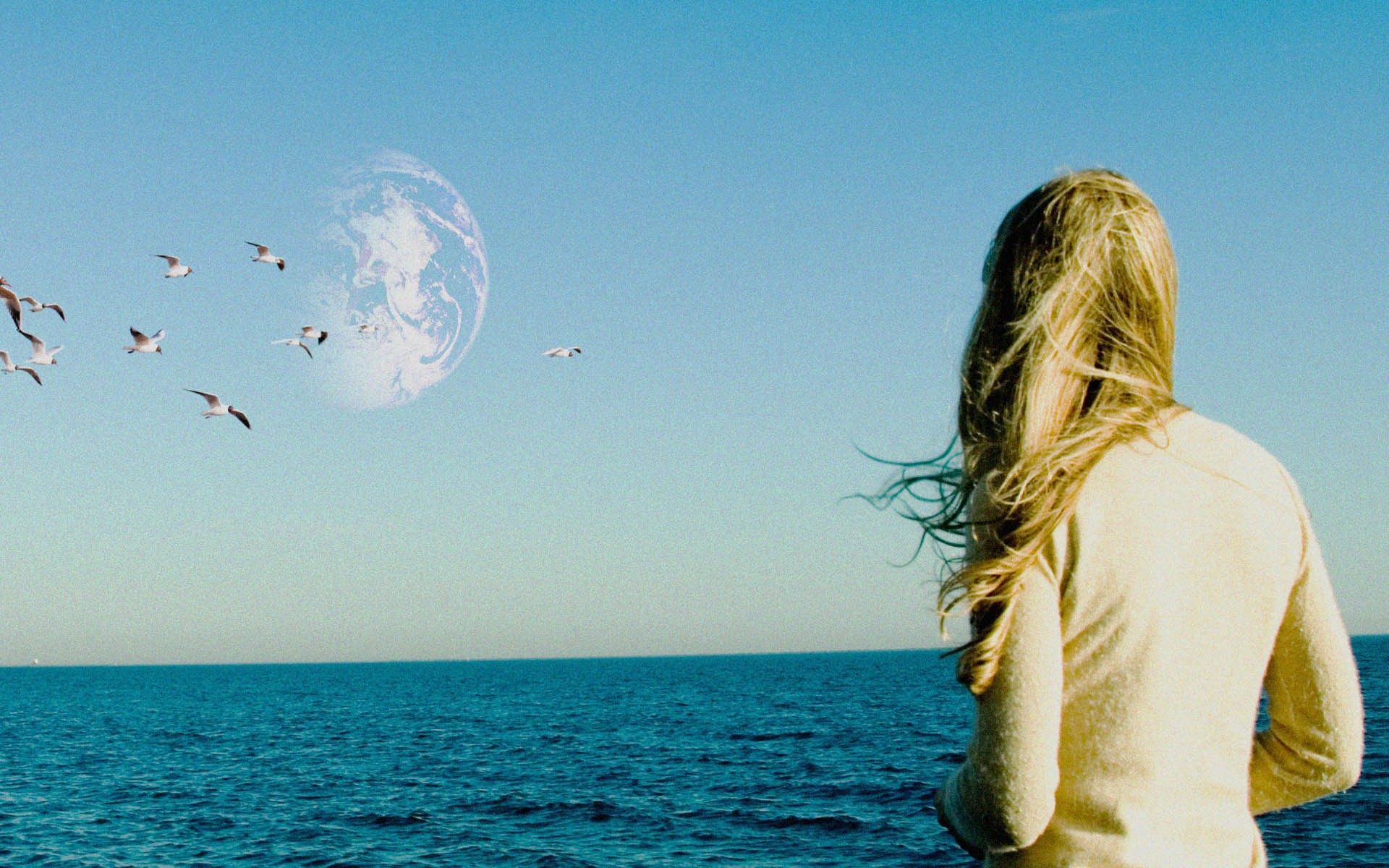 ANOTHER EARTH. If there were such a label, I would call the independent feature Another Earth "alt-science fiction." The scifi element of the film consists of the discovery that a second earth is approaching our own, labeled by us, of course, as "Earth 2." Gradually, it appears that this other Earth may be a sort of clone of our own, meaning that each of us has another self. The question of how would it be to meet another version of yourself makes the primary narrative, a coming-of-age/romance, so intriguing.

In a nutshell, the story centers on Rhoda Williams (an excellent and fascinating Brit Marling), a brainy young woman who was accepted to M.I.T. when she was only 13. As a 17-year-old teen, though, Rhoda drives after drinking and when she is gazing at the nascent Earth 2 out her car window, she rams into another vehicle at full speed killing the entire family save the husband John Burroughs (William Mapother), a professor of music.

Released from jail four years later, now a felon, Rhoda takes a job as a cleaner at a high school. Deciding to seek out and apologize to John, Rhoda's courage fails her and she pretends to be from Maidenhaven Cleaning service. As she continues to clean for a depressed John, their relationship becomes increasingly personal and mutually supportive. Additionally, Rhoda has entered an on-line contest to win a free seat on a shuttle that will go to Earth 2.

Discovering the essence of who you are is a fixed component of coming-of-age stories, but the interplay of the possibility of meeting another you adds a different level to the genre, and the very interesting outcome of this story depends completely on the sci-fi aspects of the film.

The film is written by Marling and first-time feature director Mike Cahill, who have crafted one of the more interesting films I've seen this year. Mapother (In the Bedroom) and Marling are completely convincing as they build their fragile relationship, and Marling is the most fascinating actor I've seen since Jennifer Lawrence in Winter's Bone. The film's final image should provide a range of thought-provoking possibilities. A modest but very fine film. PG-13. 92m. Ends Thursday at the Minor.

DON'T BE AFRAID OF THE DARK. In slasher films, when we see a couple engaging in sex early in the film, we know both that one of them should not go downstairs alone afterward and that he/she will. Similarly, in the horror genre, we know that not only is buying an old house without proper research a bad idea, an even worse one is opening up a buried and sealed basement. In these genres, though, what is a stupid action in real life becomes an imperative in the film. In Don't Be Afraid of the Dark, a remake of a 1973 TV movie, the film's prologue graphically shows us why people should stay away from the basement.

This doesn't stop ambitious architect Alex (Guy Pearce), his girlfriend Kim (Katie Holmes), or unhappy daughter Sally (Bailee Madison) from doing just that when they discover the hidden part of the mansion Alex has bought to renovate and submit to an architecture magazine.

Ignoring the dire warnings of the house's caretaker, they reopen the basement, allowing Sally to escape her alienation by exploring it. What she discovers and releases torments her at night, and she sanely wishes to leave the house. Typically, her driven father just thinks it's all mental.

To reveal more would be to destroy any pleasures this modest film has to offer, but if you are a fan the rest of the story will hardly be a surprise. To its credit, the film is an attempt at creating horror without all the gruesome bloodshed that seems to mark the genre these days. It is too bad, then, that the film could not have found some fresh ideas.

It's been a while since I've seen Holmes, but as it turns out probably not long enough. Her portrayal of Kim is terminally bland, which unfortunately is how I see her acting in general. I must say, though, I did enjoy the character's final fate, and I now have a somewhat less benign image of tooth fairies. Rated R. 99m. At the Broadway and Mill Creek.

OUR IDIOT BROTHER. I've long thought Paul Rudd is one of the most likeable, endearing movie actors around, so it's nice to see him getting some prominent roles. It's even nicer when those roles are in movies I actually like, and this is one.

Our Idiot Brother has the biggest heart of anything I've seen recently. This can of course be largely attributed to a smart, kind, astutely observed screenplay by David Schisgall and Evgenia Peretz (whose brother Jesse directs). But Rudd's performance as Ned Rocklin (the titular brother) elevates the movie beyond standard saccharine indie family dramedy.

As played by Rudd, Ned is the perhaps the single most open, idealistic, honest person on the planet. Never mind that these traits make him nearly unemployable, or that his extreme forthrightness can create problems for his intimates, or that he's groomed himself to closely resemble late-period Jim Morrison. I just can't help but like the guy because Rudd makes him real, portraying him with such care and subtlety that all his actions, however silly or poorly planned, ring true. A less capable actor could easily have rendered Ned cartoonish or unbelievable, but my schoolgirl crush on Paul Rudd has once again been justified: he carries it off flawlessly. It doesn't hurt that he's surrounded by a great supporting cast, including the always funny Adam Scott, Steve Coogan and Parker Posey (just to name of few of my favorites).

I was very pleasantly surprised by Our Idiot Brother, as I don't usually go in for comedies of manners. But thanks to its vaguely cynical tone, which is offset so nicely by Rudd's old-fashioned optimism, the movie really sets itself apart. Plus there are some nice jabs at both hippies and hipsters, whom I generally find equally insufferable. Rated R. 90m. At the Broadway and Mill Creek.

COLUMBIANA. On the other hand, we have Colombiana, which is frenetic, dull, overblown, implausible and generally miscalculated.

Luc Besson co-wrote the script, which means he thinks he still has more to say about the girl-assassin out for vengeance sub-genre he's been mining for decades. Unfortunately, what he has to say isn't really worth hearing. Spelling out plot details would be pointless and frustrating, so we'll skip it.

Basically Zoe Saldana plays the world's most accomplished contract killer, having set that as her life-goal when she was 9. Fortunately, her uncle thought it would be a good idea to teach a 9-year-old girl how to be a murderer. But inside she stills nurses the scars left by the murder of her parents, and aches for revenge.

This has been done countless times and it has often been done better. PG-13. 108m. At the Broadway and Mill Creek.

APOLLO 18. It would appear as though this film is attempting to Blair Witch you … or is it? From the official website: "Officially, Apollo 17, launched Dec. 17, 1972, was the last manned mission to the moon. But a year later, in December of 1973, two American astronauts were sent on a secret mission to the moon funded by the U.S. Department of Defense. What you are about to see is the actual footage which the astronauts captured on that mission. While NASA denies its authenticity, others say it's the real reason we've never gone back to the moon." Well played. Rated PG-13 for disturbing sci-fiety. 90m. At the Broadway, Fortuna, the Minor and Mill Creek.

THE DEBT. Helen Mirren, Sam Worthington and Tom Wilkinson play retired Mossad secret agents who receive the shocking news that the celebrated mission they thought they'd completed 30 years earlier -- to track down a Nazi war criminal in East Berlin -- may not have been accomplished. Rated R for violence and language. 113m. At the Broadway and Mill Creek.

SHARK NIGHT. Right. So, a group of college students' sexy summer island weekend turns into a blood-soaked smorgasbord for hundreds of massive, flesh-craving sharks. It is what it is. Rated PG-13. 91m. At the Broadway and Fortuna in 3D and Mill Creek in 2D.

Speaking of sharks, Thursday is once again the Arcata Theater Lounge's Ocean Night. This month features the film A Life Among Whales as well as a talk by HSU professor Dawn Goley who spent significant time with the Klamath River Whales. Then on Sunday, break out the hankies for a humble, radiant, terrific screening of Hanna-Barbera's Charlotte's Web (1973).

BAD TEACHER. Cameron Diaz plays the kind of teacher David Lee Roth might sing about. Rated R. At the Broadway.

CONAN THE BARBARIAN. Another entry on your "they'll never remake that" list bites the dust. Rated R. At the Broadway and Fortuna.

COWBOYS AND ALIENS. Daniel Craig and Harrison Ford star in this film set in 1873 Arizona Territory about ... well, you know. Rated PG-13. 118m. At Garberville.

FRIGHT NIGHT. Colin Farrell jumps on the sexy vampire train. Rated R. 106m. At the Broadway and Fortuna (in 3D) and Mill Creek in 2D.

HARRY POTTER AND THE DEATHLY HALLOWS: PART 2. The boy-wizard becomes a man-wizard in the final installment. PG-13. At the Broadway.

THE HELP. A racially diverse group of women form an unlikely friendship around a secret writing project in segregated 1960s Mississippi. Rated PG-13. 146m. At the Braodway and Mill Creek.

MIDNIGHT IN PARIS. Film directed by Woody Allen sees Owen Wilson fall in love with two eras of the City of Lights. Rated PG-13 94m. At the Minor.

RISE OF THE PLANET OF THE APES. This is when it all went bad for us humans. Thanks a lot, James Franco. Rated PG-13. 110m. At the Broadway, Fortuna and Mill Creek.

THE SMURFS. We couldn't get anyone on staff interested in reviewing this movie. But it's about Smurfs, if you're wondering. PG. 102m. At the Broadway.

SPY KIDS: ALL THE TIME IN THE WORLD. Your kids will love watching kids save the world. Rated PG. 89m. At the Broadway and Fortuna.

30 MINUTES OR LESS. Getting a bomb strapped to your chest by bank robbers can be hilarious. Rated R. 83m. At Fortuna.

TREE OF LIFE. Terrence Malick uses his imagery mastery to blow your mind in this impressionistic story of a Midwestern family in the 1950s. Rated PG-13. 139m.