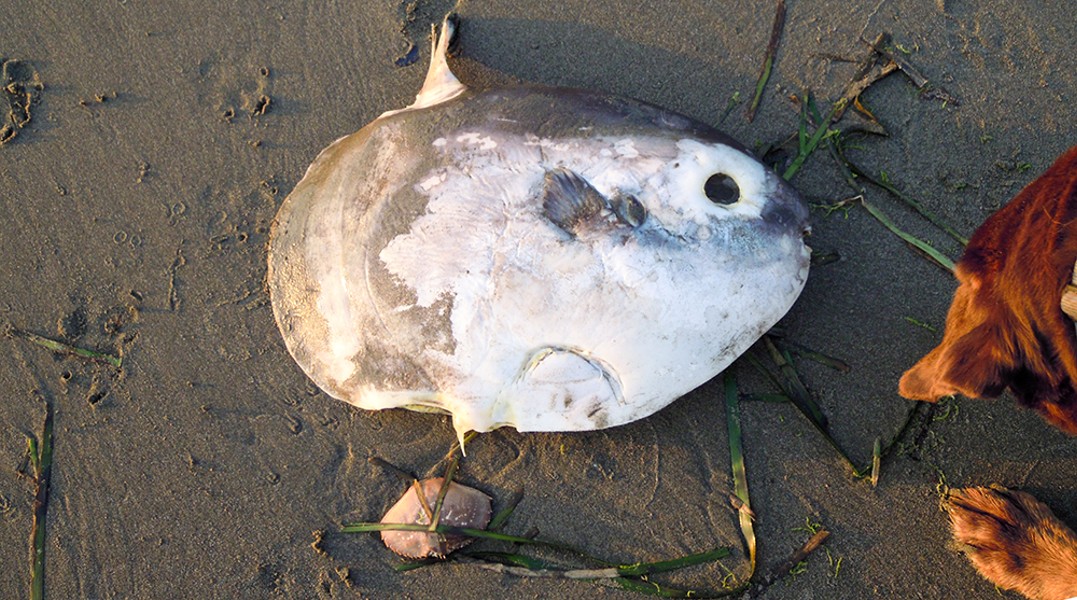 Photo by Mike Kelly Mola with a mangled fin and shark bite.

Photo by Mike Kelly A small mola not caring.

Evolutionary history" is probably a terrible phrase to begin a lighthearted natural history story with. But maybe if I throw in live fish disc golf, that will keep your attention for another 500 words.

Anyway, in your evolutionary history you have a fish. There's plenty of genetic and anatomical evidence to support this. For example, when you were an embryo, you had remnant gill arches that developed into your jaw. And the similarities between your limb bones and a fish's is no coincidence. And it's not just you. It's every reptile, bird and mammal on Earth, plus every dumbass on your street.

You'd think the subject of this story might be a fish like our ancestral fish — something like a mudskipper or lungfish. But this is Washed Up, and things don't work that way around here. In fact, today's fish is practically the furthest you can get from our ancestral fish.

The ocean sunfish (Mola mola) is a member of the order of fishes called Tetraodontiformes, which includes pufferfish, triggerfish, filefish and a few more goofy looking ones. This order of fish arose very late in the evolution of fishes. The Mola mola didn't come around until over 300 million years after your ancestral fish started to become you.

So don't worry if you have a disproportionately small mouth that you can't close. You are not a Mola mola. You may have thick rubbery skin or have slightly toxic, watery flesh, carry a heavy parasite load, have spongy bones, weigh a couple thousand pounds or lay around in the sun doing apparently nothing. But you didn't arise from an ocean sunfish. So take comfort.

Because biologists have documented asshole sea lions flinging small ocean sunfish by their fins like Frisbees on Monterey Bay. And the one I found on Mad River Beach had mangled fins, too, so it's probably happening here. I'm applying for a research grant to prove that the sea lions are targeting the red and green channel marker buoys in a rudimentary form of disc golf.

My plan is to wear a sea lion suit and swim out among them with a few plastic ocean sunfish replicas under one flipper and a pony keg of craft brew under the other flipper. I'll see if I can't get a tournament started. I'll use the tournament to conduct outreach to show the sea lions the superior and humane flying quality of my plastic molas. It will be a revolutionary scientific discovery and end the carnage.

Molas occur pretty much everywhere you are likely to go on the ocean. Look for them floating at the surface on their sides. You may see their fins sticking up when the seas are calm. We spotted several of them one morning a few years ago out on the halibut grounds off Eureka. We found ourselves drifting with one next to the boat and I wanted to get a picture. So my buddy put the net under it to keep it from swimming away but that wasn't necessary. The thing seemed totally uncaring or unaware that we were there.

Apart from their half-a-fish look and general ridiculousness, molas grow the most of any vertebrate animal from baby to full adult. They grow from the size of a spiky-looking pea to well over 10 feet and weigh a ton. Plus a single female can produce 300 million eggs at a time. So if the disc golf outreach program doesn’t work, I’ll train molas to be better parents so they can rally the brood to kick some sea lion ass.