October 11, 2022
comment
*Editor’s Note: This is a closed community event. To limit potential safety hazards, those without a pass are asked to refrain from visiting the location.

If your chili pepper harvest wasn’t quite what you hoped for this year, don’t worry, a bumper crop is about to come in, and they are red hot!

Rumors that the rock band, the Red Hot Chili Peppers, will hold a surprise free concert in Hoopa were confirmed last Friday when the band’s stage crew began setting up at Hoopa Valley High School. 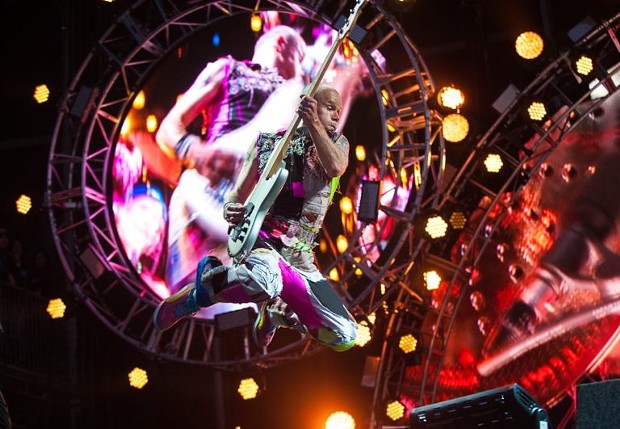 Long-time Tour Manager Gage Freeman said the band was interested in playing to a Native American community. “It’s something they’ve never done,” Freeman said. “There are not a lot of big rock bands rolling through here, right? It’s a unique place in California and I have a connection to Humboldt. I thought Hoopa is the place to do this so we’re making it happen.”

Freeman, an LA native who attended Humboldt State in the 1980s and promoted punk shows here throughout the 1990s, reached out to school administrators last Spring to begin planning.  His love for the area led him to eventually purchase a vacation home in Humboldt.


On Monday, Hoopa High Principal Maggie Peters announced the closed concert to students during their Indigenous People’s Day Assembly. Permission slips went home with each student and ground rules were discussed. If they want a taste of the Red Hot Chili Peppers, they should attend school and return their slip on time–and refrain from getting suspended.

“We are very lucky to have a very high profile, multi-platinum rock band, whose lead singer also happens to be Native American, want to come and perform for our school and our community,” Peters said during the assembly. “That’s really amazing.” The crowd cheered and thanked all of the school administrators, past and present, who made the event possible.

The permission slip expressed the exclusivity of the event. “No additional wristbands are available for friends and family to attend the event,” it said. Due to the closed nature of the event, the TRT will not publish the exact date and time here until the event is underway. Of the 900 wristbands given out to the community, a little under half were reserved for students and faculty. 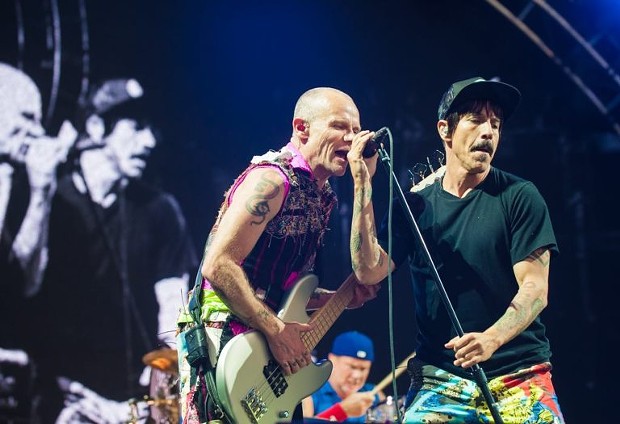 The permission slip also said that teachers and other school faculty in attendance are not responsible for chaperoning students. Event security and law enforcement will be in attendance to perform those duties. Students should also arrange for a ride home immediately following the event.

The concert in Hoopa is sandwiched between two much larger concerts for the Red Hot Chili Peppers as they complete their 2022 Global Stadium Tour. At the same time that the band’s crew prepared for the concert in Hoopa, the Red Hot Chili Peppers were in Austin, Texas gearing up for the concert there. After playing in Hoopa, they will return to Texas to headline Austin City Limits on October 16. After a brief hiatus from touring, they play in Auckland, New Zealand on January 21, 2023.

A film crew traveling with the band told the Two Rivers Tribune that they will be shooting footage for a short documentary and will conduct interviews with various people in the Hoopa Valley over the next several days as well as participate in a cultural exchange.

The Red Hot Chili Peppers have performed small surprise concerts like this one at other schools in the past, such as their 2018 Halloween performance at a school in Calabasas, California. Band member Flea also received national media attention in 2021 when he attended a wedding ceremony and pow wow on the Fort Berthold Reservation, home of the Mandan, Hidatsa and Arika Nation, in New Town, North Dakota.

As for gigs in Humboldt, they’ve come a long way since they played their early punky funk sound wearing only their socks at the Mateel Community Center in Redway in the 1980s.  Fans have watched the group struggle through addiction in their earlier years. Many of their songs were inspired by that struggle and the redemption that would follow. Freeman said they are bringing their message of resiliency and overcoming addiction with them to Hoopa, as they do everywhere they go.

“I’m getting excited just thinking about it,” Freeman said.

The Red Hot Chili Peppers have been recording more than twice as long as their Hoopa High audience has been alive—about 39 years. They are the most successful band in the history of alternative rock with over 120 million records sold worldwide. They were inducted into the Rock and Roll Hall of Fame in 2012 and have won six Grammy Awards. The band also released a #1 album this April “Unlimited Love” and are releasing their second studio album this year on October 14 “Return of the Dream Canteen.” For the handful of students who may not know who the Red Hot Chili Peppers are, a deep dive into the band’s history will likely be interspersed in class curriculum on Wednesday.

“Start googling and learning some lyrics,” Peters said. “[The day of the concert] will be Red Hot Chili Peppers Knowledge Day. Start learning some songs!”

Posting about the Red Hot Chili Peppers to Social Media? Be sure to use the hashtags #RedHotChiliPeppersHoopa and #RHCPHoopa

Here they are in the 80’s playing at the Mateel in Redway with only socks on:

This story is reposted with permission from Two Rivers Tribune, tworiverstribune.com.