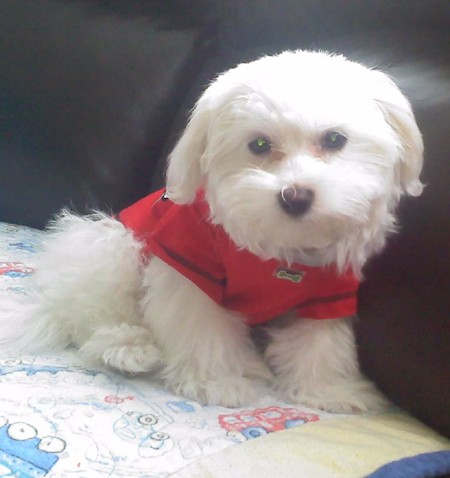 I don't know who held the title up 'til now, but Eureka has a new king of sociopathic cruelty, and his name is Donovan Nathaniel Baltzley.

A warning: If you can't stand the thought of something horrible happening to the dog pictured here, you should probably stop reading this post.

You may remember Baltzley's name. Last year he pleaded guilty to killing his girlfriend's family dog, a schnauzer-poodle mix named Sarah Lou, in 2008. After stealing and murdering the adorable creature, Baltzley pretended to help the family search for her, according to the Eureka Police Department.

Later, after he and his girlfriend separated, Baltzley set up a MySpace account in Sarah Lou's name, then sent friend requests to the dead dog's family.

At Baltzley's September trial, Judge Joyce Hinrichs opted to suspend his three-year prison sentence in favor of a five-year probation that included a year of anger management courses, regular visits with a psychologist and a restraining order to keep him away from the dead dog's family.

He should have been thrown in jail, evidently: Yesterday he was arrested and charged with two new counts of animal cruelty. According to an EPD press release issued today, after his trial Baltzley was inexplicably allowed to move in with a Eureka family that included two small Maltese dogs, one of whom, Bentley, is pictured above. "Just prior to Bentley's death," the release continues,

he began to show irrational fear of Baltzley. On January 7th, when family members got home from work, they found Bentley under a bed, deceased. Circumstantial evidence suggests the dog did not die of natural causes and Baltzley was the only person with an opportunity to harm the dog.

A month later, Baltzley moved in with another family, this one with four dogs. After about a week these dogs, too, began to display "irrational fear," as the EPD calls it. Somehow I suspect it was quite rational.

Baltzley also has two restraining orders and one felony arrest in his past for domestic violence, according to the Times-Standard. A trial date for his latest charges has not yet been set.