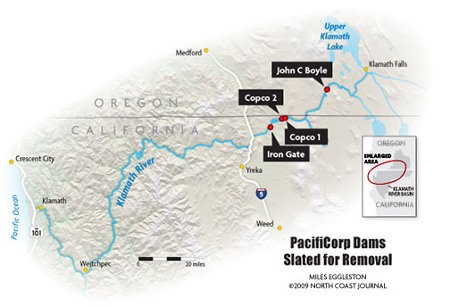 The Herald and News in Klamath Falls, Ore., has been publishing an ongoing "River Series" on the Klamath River dam removal and restoration agreements, and it's worth checking out the 77 entries to date. Don't worry, the reports are tasty little munchables, easy to digest in a split moment, some more informative and entertaining than others. (This link brings you to the first entries from Feb. 12; from there click "previous" to work your way to the present.)

The news team set about its task with a charitable, the-good-in-us mindset:

"Late in 2011, Herald and News reporters traveled up and down the Klamath River in search of stories that demonstrate how the people along the river are united. Though each section of river has its own personalities and problems, the water that stretches from Upper Klamath Lake to the Pacific Ocean brings all the regions together."

The reports range from historical fact sheets on each dam to colorful portraits of individuals from the upper basin on down to the mouth -- including portraits of goats in the Seiad Valley, ocean and river fisherfolk, potato farmers, a ranching family that still bucks hay by hand, a Hoopa Valley tribal member and more.

If you've drifted away from the Klamath dam-removal issue and want to be pulled back in painlessly, the HandN's up-to-date primer on the proposal and two agreements, in today's edition, is a decent place to start. (Then you can go re-read earlier in-depth reports in the NCJ, in particular one on the agreements by Hank Sims and another on upper basin farmers by Japhet Weeks.)

The team interviewed fishemen, tribal members, farmers, politicians, jet boat operators and more -- some who want the dams taken down, some who don't. In one part of the series, it asked folks: "If you could send a message to folks in other parts of the Klamath River Basin, what would you say?" Some snippets of answers:

"Decommissioning four Klamath dams is an enormously expensive, high-risk experiment ... Proponents point to the prodigious effort made in that regard. Siskiyou County is adamant that responsible thresholds are far from being met. Done in an absurd time frame, the EIR's papering over of unknowns, risks and costs makes a sham of the entire ordeal. ..." -- Jim Cook, Siskiyou County supervisor

"There was no analysis of the environmental, economic or social impacts before the natural wealth of the river was taken and redistributed to the Upper Basin. Since then we have seen tremendous losses to our commercial, recreational and tribal fisheries. ... The legitimate concerns voiced early on have been answered with objective data and analysis that clearly shows dam removal is good for jobs, good for ratepayers and good for salmon." -- Mark Lovelace, Humboldt County Supervisor