The End of Occupy Eureka? (UPDATED) 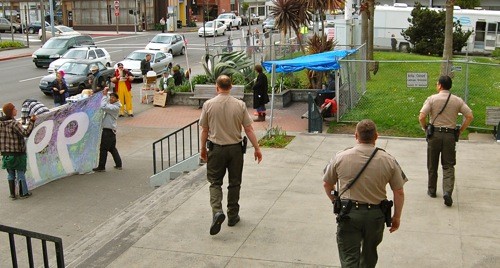 Prior to their arrival, Occupy Eureka members moved their information tables over the crack in the pavement denoting where the public sidewalk begins. (The new ordinance notes that it "shall not apply to the public sidewalks directly bordering the grounds.")

Deputies cut down signs and tarps affixed to the fence while protesters hurled "traitor" and "fascist" their way.

Occupier James Decker stated that the occupation would continue, albeit in the much more cramped confines of the narrow strip of sidewalk.

(Verbena monitors from the sidewalk.)

One arrest was made (below): During the sign excising period, Patricia Kanzler wrapped herself in an American flag-style banner to keep it from being confiscated. Deputies let her keep it and moved on. Immediately, Kanzler attempted to reattach the banner to the fence. After being told she would have to stop putting things on the fence, she responded:

She was asked to put her hands behind her back. She complied, was cuffed and trotted away. 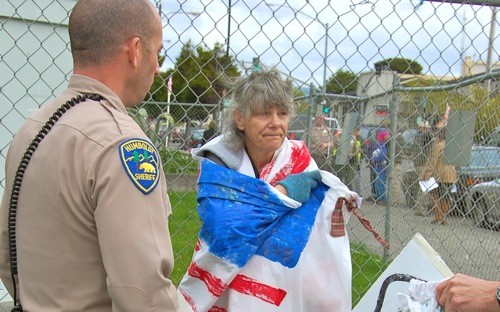 At approximately 4:00 p.m. Humboldt County Sheriff’s Deputies assisted by Humboldt County District Attorney’s Office Investigators contacted the group again on the Fifth Street Side of the Courthouse. The group had moved their table and chairs to the sidewalk, which is not covered by the ordinance. They were again requested to remove their signs from the fence and personal property, such as tarps. They were advised the signs and other property would be considered abandoned if no one claimed it. No one claimed the signs or other property. The deputies were told by the group they would not remove the signs, deputies then removed the signs and property that was in violation of the Emergency Ordinance. Immediately after the deputies removed the signs one of the members of the group, Patricia Ann Kanzler, 59 years from Eureka was witnessed by the deputies putting a sign back on the fence. She was asked to remove the sign and told if she did not she would be arrested. She refused and she was arrested and booked into the Humboldt County Correctional Facility for violation of Humboldt County Ordinance 2477, which is a misdemeanor, bail is $5,000.00. She was released on her own recognizance.

Did Occupy Eureka last past last night's 9:30 p.m. deadline? Sure enough, protesters and tables remained amidst Thursday morning's drizzle (below).