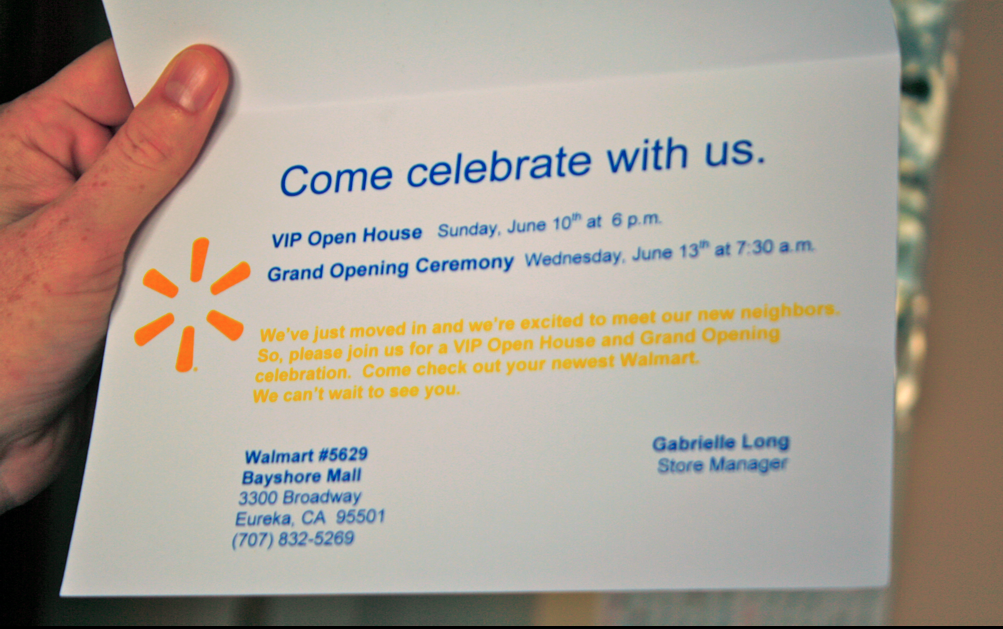 Holy crap! Wal-Mart may have been coy about moving into the Bayshore Mall, but its grand opening is gonna be off the chain! Get ready for a week-long explosion of orgiastic consumer pageantry the likes of which Eureka has never seen.

According to an apparently genuine invitation sent to the Journal and other local media outlets, the festivities will include dancing mascots, local luminaries and supplications before our nation's most revered non-corporate authorities -- God, the military and Old Glory.

Also on the 13th, Eureka High School's Navy Junior Reserve Officer Training Corps will conduct a color guard flag ceremony; Wal-Mart grunts  associates will sing "The Star Spangled Banner"; and corporate mascots including Chester Cheetah, Bimbo Bear and whatever Pepsi's mascot is will dance to "Let's Get It Started" by the Black Eyed Peas.

Still not excited? Well how about some Native American flute variations? A Wal-Mart employee has that covered for the June 10 "Welcome and Evening Preview Night." No? Well how do free, reusable shopping bags grab you? That's right: The first 300 customers on Saturday, June 16 get 'em! You read that right!

Still not convinced? Two words: Cupcake walk! The Wal-Mart tent will be set up on Saturday, June 16 featuring said walk, along with samples of smoothies and hot dogs, a "Prize Cube" for gift cards, an electronics department game tournament and Kellogg's face painting (whatever that means).

Our dark days are coming to an end, North Coast. Let's party!

(In case you think we're joking, here's a photo of the itenarary that came with the invitation.)