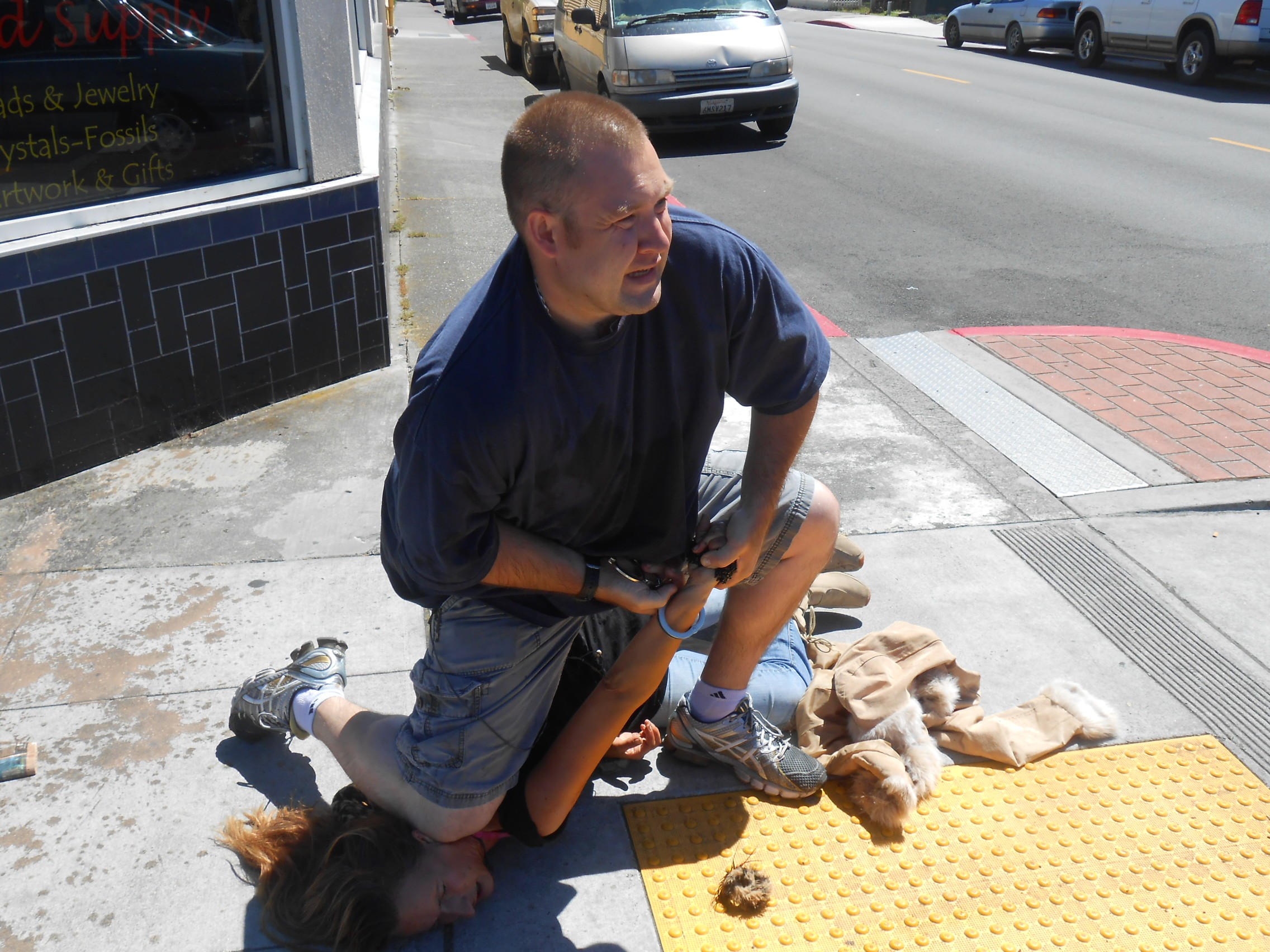 A civilian "loss prevention officer" employed by the North Coast Co-op in Arcata chased down and handcuffed an alleged shoplifter on Saturday afternoon, and a neighboring business owner who witnessed the arrest says the man used excessive force.

Michael King, a co-op member and owner of the bead supply store on the corner of Eighth and I streets, said he was working in his shop around 3 p.m. when his kids called out to him, telling him to come look at the man holding a woman down outside. King looked out the window, saw what his kids were describing and decided to grab his camera.

"I didn't know if this guy was a cop, a mugger, her boyfriend," King said in an interview Monday afternoon. "It looked like he was going for cuffs, but he was in plain clothes."

The man kept the woman pinned to the ground, kneeling on her neck and pulling her arm back to cuff her. King felt that the force was excessive and snapped a few photos, including the two in this post.

"I asked him if he would provide his name or any other form of ID," King wrote in an email that he later sent to co-op management. "His response was to say, 'Give me that camera.'" King told the Journal that the man repeatedly demanded he hand over his camera, later asking a co-op employee to take it from him, but the employee refused.

In his email, King described what happened next: "He tried to come in the [bead] shop & physically take the camera from me, but the door was already locked by that time & with the arrival of the APD [Arcata Police Department] he no longer tried to steal my camera, or make mention of it. Had I not locked the door, I would have been a victim in this matter."

In a phone interview Monday afternoon, Arcata Police Detective Sgt. Todd Dokweiler said that the woman was a shoplifter fleeing from store employees, and the man who apprehended her was one of the store's loss prevention officers.

"We were notified, we responded, and we accepted the citizen’s arrest," Dokweiler said. "It's a pretty common situation where employees will detain someone -- either cooperatively or not."

Kingg posted his photos of the incident on Facebook and later walked over to the co-op, where the security guard was "real apologetic" about trying to take his camera, he said. But Kingg is still hoping that co-op management will take action to prevent such an incident from happening again. His email, which he says he forwarded to numerous co-op employees, explains his concerns:

"While he may have been angered by her resistance, this is no excuse for excessive force. People in a position of power have the responsibility to behave appropriately & most witnesses present would say that he overstepped his bounds & there is no doubt that he went too far in attempting to steal my camera & threatening me."

Reached Monday afternoon, Arcata store manager Kevin Waters said, "As with any situation like this we’re going to investigate it fully." Beyond that he had no comment.