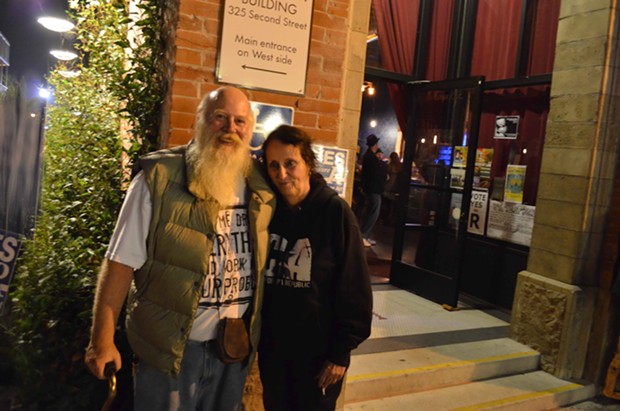 SECOND UPDATE:
The third election night report is in, with 67 percent of county precincts reporting, but the numbers on Measure R didn’t change from the second report. It’s likely that most, if not all Eureka precincts, are in.

Over at the Siren’s Song Tavern, Fair Wage Folks gathered to listen to Turtle of the Mad River Ramblers play acoustic guitar tunes.

James Decker was heartened by the slight improvement in the second election night report. “I don’t think we’re closing fast enough but we are optimistic,” he said.

If the measure fails, he said the Fair Wage Folks have a shot in appealing to what looks like a leftward shifting Eureka City Council to enact a minimum wage raise. And, with opponents’ cries of unfairness regarding Measure R’s Eureka boundaries, Decker says the Fair Wage Folks could try for a countywide effort.

Zack Thiesen, who spoke with the Journal about Measure R and followed that with a letter to the editor, spoke with a supporter outside of the Siren’s Song. He was pleased with the civility of the debate over minimum wage, but said he’d be happy when it was all over.

Don Smullin of the Eureka Chamber of Commerce, which opposed the measure, did not return a call seeking comment.

Measure R is all but doomed. With 17 percent of precincts reporting countywide, and 2,402 votes tallied from polling places today, there’s an overwhelming “no” consensus. Of 5,033 total votes counted, only 1,850 (36 percent) voted for the measure, with 3,183 (63 percent) against. With the typically progressive skewing precinct votes coming in heavily against the measure, there’s little hope for the Fair Wage Folks.

The first returns are in for Measure R, which would raise minimum wage to $12 an hour for some of Eureka's largest employers — and it's a large early lead for the measure's opponents.

Zero precincts are reporting, which means the ballots counted so far are the early voters and mail in votes — typically more conservative voters who were expected to oppose the minimum wage increase. Depending on Eureka voters' foot-to-pavement turnout today, the measure could, potentially, climb back from it's early hole.

Measure R has spurred passionate debate, from the supporters who say an increased minimum wage would be good for the poorest workers in our community and the economy at large, and the opponents who say it would create an unfair economic climate and cause layoffs and business closures.

The Fair Wage Folks, who gathered enough signatures in 2013 to get the ordinance on today’s ballot, earned $4,600 in support.

If passed, the minimum wage increase will affect employees in Eureka city limits who work for companies that employ 25 or more people. It also includes a yearly increase based on the consumer price index.

For an in depth look at the campaign and the opposing sides’ arguments, read the Journal’s coverage of Measure R here, and read letters to the editor regarding the ordinance here and here.