Coffee with the Captains

February 24, 2015
2 comments
A crowd of about 30 citizens, public officials and police officers squeezed into Vellutini's Bakery in Henderson Center this morning for the Eureka Police Department's first "Coffee With the Captains" — an informal sit down with local law enforcement.

Suzie Owsley, with the city's Problem Oriented Policing team (POP), said that this gathering was one of many the EPD has planned in order to facilitate discussion between officers and community members. Future events may include block parties and gatherings at different locations throughout Eureka.

"It was nice of Vellutini's to offer up this space," she said, "Plus, it's Five-Cent Cookie Tuesday!" 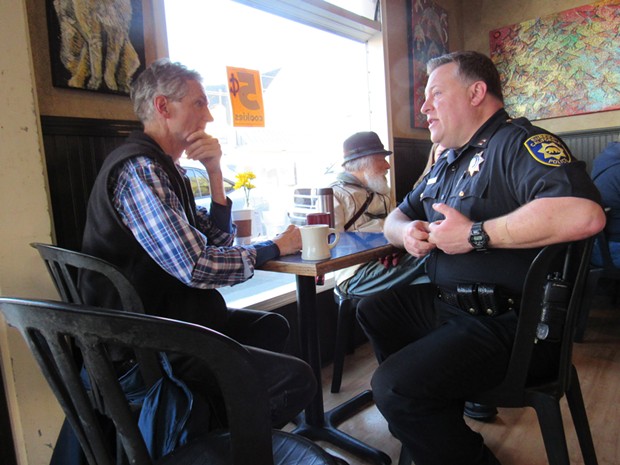 "We get people who come into our business and you can't tell if they're high or insane, or both. They just scream. It's off-putting to customers," said Todd Hudy, co-owner with his wife, Tanya, of a new vintage furnishing store in Old Town called If.

Nodding, Watson said he sympathized with the frustrations of business owners, and that the department had noticed an uptick in similar issues since the implementation of Proposition 47.

"Unfortunately, you can't arrest your way out of these problems," he said, adding that Proposition 47 will eventually translate into expanded services for the mentally ill and addicted, ultimately reducing crime. "Prop. 47 has allowed us to concentrate on the worst of the worst, and keep them behind bars. Burglary, for example, is an automatic felony. We've seen a 40 percent drop in burglaries over the last month."

"[Proposition 47] is saving the state money, but it's destroying our businesses," said Mike Howard, who works near the bakery and has participated in the clean up of several homeless camps. "I can't walk with my kids down the boardwalk without there being old drunk dudes just laying there. We can't spend money on attracting tourists if this is what they're going to see when they get here."

Referring to the issue of homelessness, Watson replied that raiding camps and moving people around just "creates displacement."

"Obviously we can't let it get to a Lord of the Flies situation where camps get entrenched, but when we clean up a camp all we do is reshuffle the deck. Homelessness is very complicated. We need to find the root cause."

Watson added that the current amount of officers on patrol at any given time was insufficient to adequately address concerns, but that his department was working on a grant that would add staff members.

"Crime rates are based on actual census numbers for Eureka, which is roughly 28,000 people," he said. "That doesn't take into account commuters, tourists, people just passing through. On an average night shift, we have only four officers on patrol."

This number elicited a gasp from several citizens at Watson's table, who followed up with questions about how they could bridge the gap. The captain encouraged them to form neighborhood watch groups and other community organizations. 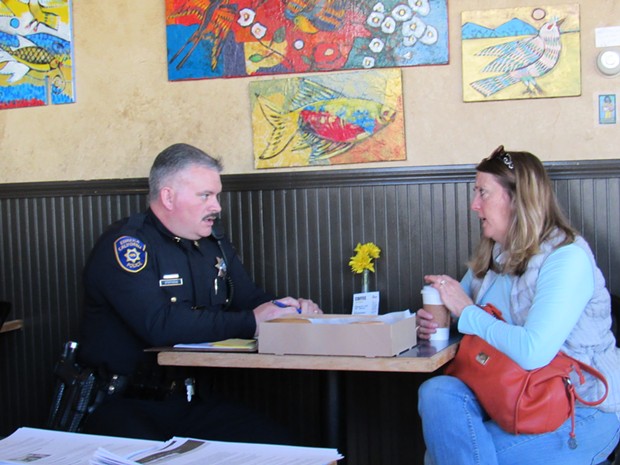 "You can be a strong voice of support for law enforcement, and your community," Watson continued.

Todd Hudy and several other residents mentioned a recent incident in which a woman was chased "in broad daylight" down the street to her house by a strange man.

"What could I have done in that situation? Should I have tackled him? What about self-defense? Can we use pepper spray?"

Watson took several moments to explain the state laws around making citizen arrests and weapon use. Meanwhile, Public Information Officer Brittany Powell went around the tables with a box of doughnuts still warm from the bakery's oven.

Waving away the doughnuts, Watson told Hudy that 911 should be the first call anyone makes when they see a crime take place.

"You don't want to use force unless you have to," he said. 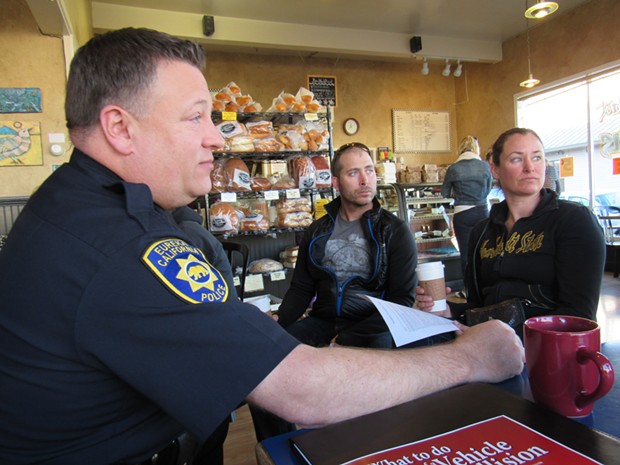