Who Bombed Judi Bari? 25 Years Later, We May Find an Answer 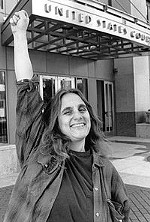 Twenty-five years after a bomb exploded on an Oakland freeway, shocking the environmental community, the Mendocino County Sheriff’s Office is mulling launching a criminal investigation.

Capt. Gregory Van Patten said police have received some “new information” related to the May 24, 1990 bombing of Earth First activists Judi Bari and Darryl Cherney, and are reviewing it and old investigative files to determine an “appropriate course of action.”

Cherney and Bari had been organizing the controversial Redwood Summer logging protests in Humboldt County, and were on their way from the North Coast to Santa Cruz when a pipe bomb under Bari’s car seat exploded, seriously injuring her. The Federal Bureau of Investigations took jurisdiction of the bombing investigation away from the Bureau of Alcohol, Tobacco, Firearms and Explosives and the Oakland Police Department believing it was an ecoterrorism case, with Bari and Cherney its targets.

The FBI arrested Bari and Cherney on suspicion of transporting illegal explosives but, after almost two months of investigation, prosecutors announced they had insufficient evidence to charge the pair with a crime. In 2002, a federal jury found the FBI had violated Bari and Cherney’s civil rights in the case, and the pair was later awarded a $4.4 million payout, though Bari wasn’t around to see it, having died of breast cancer in 1997.

Meanwhile, it appears no official effort has been made to determine who put that bomb in Bari’s car 25 years ago. But Cherney, in Humboldt for a series of screenings of his film, Who Bombed Judi Bari?, says he has never given up his push to have the real bomber or bombers brought to justice.


Cherney says that, through litigation, he forced the FBI to turn over some DNA evidence and partial fingerprints pulled from some of the bomb components recovered from the explosion scene. “We’ve been looking for a legitimate law enforcement agency to take this on,” he says, adding that he just recently turned the evidence — and some other information — over to the Mendocino Sheriff’s Office.

Van Patten declined to go into any details of what evidence his department received or who it came from, but said a lieutenant is undergoing the “time consuming process” of reviewing the new evidence and historical investigative materials. The case currently remains under the jurisdiction of the Sonoma County Sheriff’s Office and the Federal Bureau of Investigations, Van Patten said, adding that his office will only pick up the case if it believes a crime was committed within Mendocino County.

While it remains unknown where and how the bomb was placed into Bari’s car, it’s worth noting Bari’s home was in the Northern Mendocino town of Willits.

For more information on the Redwood Summer protests, the bombing and the ensuing civil rights trial, check out the Journal’s archive here. And, if you’re free Thursday night, Who Bombed Judi Bari? Will be playing at 7:30 p.m. at the Garberville Theatre, with Cherney on hand to answer questions.

You can also check out the video below, which purports to be of Bari and Cherney’s first concert together, a seven-song jam performed at Forks of Salmon in September of 1988.