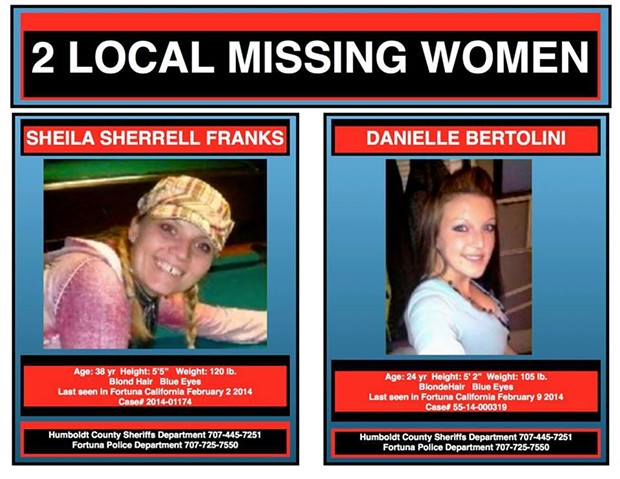 Family members have confirmed that the skull found on the banks of the Eel River this spring belonged to Danielle Bertolini, missing since February 2014. A family member had initially posted the news on the "Help find Sheila Franks and Danielle Bertolini" Facebook page yesterday, but only confirmed with a press release this afternoon. In the release they encourage community members to continue searching for Sheila Franks, whose disappearance they believe to be connected with Bertolini's.


On 5-27-15 the mother (Billie Jo Dick) of Danielle Bertolini was notified the Humboldt County Sheriff's Office that the skull found in the Eel River on March 9, 2015 near Ferndale was positively identified as that of her daughter. The coroner is expected to do a press release to formally confirm this information soon.

Danielle who is from Bangor, Maine came out to California in 2013 with hopes of beginning a new life after the loss of her infant son. After she had not contacted her family as she did on a daily basis, a missing person's report was filed on her behalf in Humboldt County on 2-19-14. Danielle’s family immediately flew out from Maine and joined her father, Jon Bertolini who lives in Oregon to search for their daughter. They were accompanied by Deemi Search and Rescue out of Maine. (Billie Jo Dick is a volunteer for the organization.)

Search efforts immediately brought them to an item belonging to Danielle. This item led them to believe Danielle had been murdered. Danielle’s family along with the rest of the search team, was quickly became known as Nellie’s Army. Billie Jo posted messages on her Facebook every single day promising to her daughter that Nellie’s Army would find her.

Soon after that they had found out that Sheila Franks had gone missing from the same area just a week before. They made contact with Sheila’s family. They quickly learned both girls were last seen by the same man though Danielle and Sheila had not known one another.

In January 2015, a Facebook page was created bringing the two girls together to raise awareness to the fact both cases were tied together.

Billie Jo Dick stated from her home in Bangor, Maine today that they are completely devastated by the confirmation their daughter is deceased. The words from the detective had been expected to be heard at some point. It is just final now. How do you live to see your daughter die at the age of 23?

Billie Jo also wanted to thank everyone that has helped in finding Danielle. She also wanted to let everyone know it is extremely important that we continue together in seeking justice for Danielle and Sheila. It is imperative we find Sheila Franks. We will continue with Nelli’s Army until Sheila Franks is found and justice is served!

Please continue to search for Sheila Franks. We will not give up until she is found.
www.facebook.com/helpfindsheilafranksanddaniellebertolini

There has been a go fund me account set up to help Billie Jo and her family who live in Bangor, Maine. They will be traveling between Maine and California to bring Danielle back to her hometown for a proper burial. We need help covering those costs. Along with travel expenses, when the person of interest is charged with her murder and goes to trial more expenses will incur flying back and forth.

This is any family's worst nightmare, to lose a daughter at the age of 23 at the hands of someone else. We are asking all of you to please help by donating. Any amount will help.
http://www.gofundme.com/vq422g