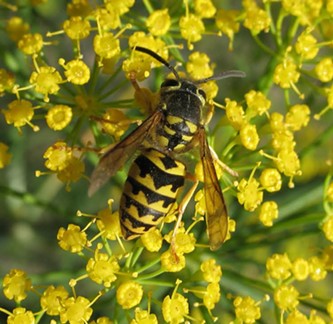 Once, while recovering from shoulder surgery, I heard my wife scream from the backyard. Arm immobilized with a brace, I stumbled outside. She was under attack from dozens of yellowjackets. Before I could get her away from them she had accumulated nine stings. The scars she got from accidentally disturbing a nest in the ground lasted the rest of her life. So, yellowjackets became personal. 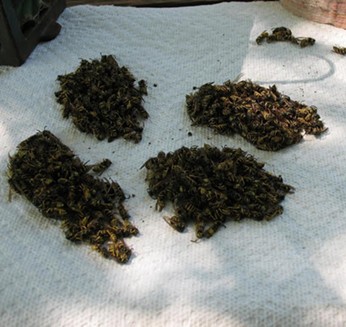 A year later, I discovered a new nest in our patch of rosemary. Not wanting to use chemicals in the herb bed, I made a trap from a two-liter soda bottle. Every evening after they were quiescent I'd replace the trap, then add a bit of fingernail-polish-remover (ethyl acetate) to kill them. Then I'd remove the inverted top, dump them out and count. My daily depredations took about two weeks to exhaust the supply of workers. On my peak day I got 407. All told I trapped over 3,500 before the social structure of the hive collapsed and they were gone for good.

The bright black on yellow markings common to the families Vespula and Dolichovespula are imitated by many other insects. Less offensive wasps, flies and even some moths derive a measure of protection from their resemblance. So common is this mimicry it indicates to me how pervasive the fear of yellowjackets must be throughout the animal world. It wouldn't persist if it didn't work. One notable species is the Bald Faced Hornet (though not technically a hornet). Although it is mainly blue-black with white markings Dolichovespula maculata is the largest “yellowjacket” and has a reputation of being a particularly nasty brute.

Quick life history: Spring, mated queen wakes up starts a small nest from chewed wood fibers, lays 50 or so eggs. Different species make them in different settings. When the eggs hatch she feeds them and they grow into smaller adult sterile female workers who continue to build the nest. The queen lays more eggs and workers gather food etc. to feed them. The larvae in the nest produce a sweet substance to feed the workers who in turn supply them with high protein foods like meat and other insects chewed into a pulp. Nest grows, population increases. Males and fertile females are raised eventually leaving nest, mating. Males die quickly, fertilized females hunt for someplace secluded (like my wood pile) to overwinter. Meanwhile the founding queen dies, which stops the production of larvae, which in turn stops the supply of sweet food for the workers who now go out in search of anything they can find, decaying fruit, meat, garbage with some nutrients in it. Late in fall they seem more aggressive as their hive is facing collapse and the demise of everyone except the now absent new queens.

Although nobody seems to have much love for them, they are excellent killers of many pest species of insects, good pollinators and the very model of team players.