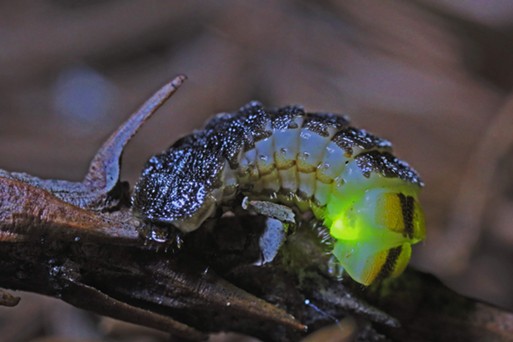 Tonight I counted four glow worms (Pterotus intergrippinis) under my redwood trees. I have counted as many as 27 in the leaf litter beneath my small 20-foot-by-50-foot grove (roughly 1/50th of an acre.) The first ones I ever saw were beneath redwoods at Grizzly Creek Campground.

So far I've seen them in every grove I've checked out on nights when the weather and moonlight was ideal. They seem to come out and display their glowing tail segments when it's dark and drippy. It is on such nights the prey to which they are particularly adapted comes out. They hunt, capture and devour small snails and slugs.

I think I have seen about all of the steps. I suspect they locate their intended prey by tracking the snail's slime trail with their short antennae. Once it catches up, the glow worm attaches its caudal appendage to the snail's shell. This gives it an anchor point from which to stretch out and bite the victim's soft body, injecting a toxic saliva. The snail then reacts violently often excreting a great mass of sticky clinging bubbles. I've been surprised surprised that the snail didn't just withdraw into its shell as they usually do when disturbed. Instead, it stampeded (well, as much as a snail can stampede) through the tiny world of mosses and grass stems. In one case the snail actually succeed in scraping its tormentor off and escaping. I do not know if the snail survived the toxic bite but after about 10 minutes the worm did succeed in escaping the sticky clinging suds. 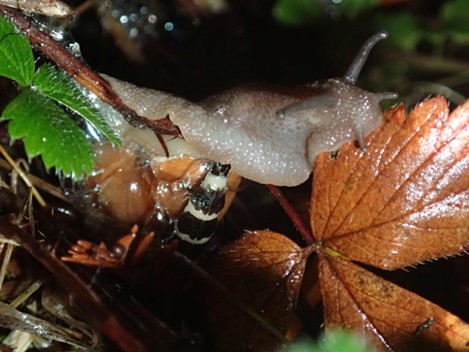 When the glow worm is successful, it can take up to three days to clean out the snail's shell, often glowing eerily, illuminating the hapless mollusk's shell from the inside.
This drama has been played out for millions of years. The power of evolution has adapted the players through a neverending arms race.

If my little grove is typical and there are about 1,600,000 acres of redwoods, it means there are somewhere between 32 and 216 million Pterotus obscuripennis out there. Considering that their common name is the “Douglas fir glow worm,” and there are probably many more acres in Douglas fir than redwoods, this insect may be incredibly numerous, but they are largely unseen and unknown because who goes out looking for tiny green LED looking bugs on wet dark sloppy nights? Me.