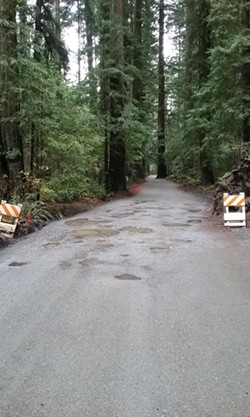 After decades of disrepair, California State Parks has pulled together the funding to patch a 5.25-mile section of heavily-touristed pavement in Humboldt Redwoods State Park. The bumpy, narrow route, pitted with potholes, has been the bane of locals and big tree gawkers alike for years . According to Brian Merrill, a senior geologist with California State Parks, the organization had been awaiting some funding help from the county of Humboldt to resurface the road, but with the county’s ongoing infrastructure woes, this collaboration never came to fruition. So when a key bit of state funding – requested for years – came through, the park decided to get going. The lone hitch: A potentially major inconvenience for those hoping to use that stretch of Mattole Road, which goes from U.S. Highway 101 west to the Grasshopper Road intersection, connecting the remote Mattole Valley with the highway. Paving is set to begin in mid-July, and exactly how long it will last — well — Merrill wants to hear how you feel about that.

The extremely narrow nature of the road, which is squeezed on either side by old-growth redwoods, means the whole stretch must be closed as the pavement is applied and allowed to cool. If public input leans towards a “rip off the band aid” approach, the road may be closed from 8 a.m. to 5 p.m. for six consecutive days (emergency vehicles will be allowed through). Alternatively, the park could close for one or two days a week for a longer period of time –  up to eight weeks – as crews patch 37 different spots on the road. Along with providing access to hamlets in the Mattole Valley, this route also connects to the Cuneo Creek and Albee Creek Campgrounds and some favorite tourist destinations, including the Rockefeller/Bull Creek Flats loop and the Giant and Flatiron Trees.

Merrill added that the road would not be closed on weekends, and that public input about the timing and length of closures is welcome. Public meetings are expected to be held in late February or early March. The regional state parks office can be reached at (707) 445-5344.

Editor's note: This blog originally contained incorrect information about the extended closure option, stating it would close for a few hours rather than a full day. It has been updated to correct that misstatement. The Journal regrets the error.