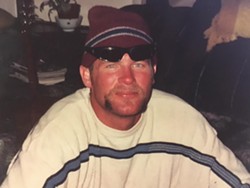 Update: The Humboldt County Sheriff's Office today identified the man killed May 3 in what officials described as an intentional act as Shelter Cove resident Jesse Earl Simpson. He was 42.


A fatal traffic collision in Shelter Cove yesterday left one person dead and a 45-year-man has been arrested in what officials are calling "an intentional act."

Few details are being released at this time, but both the Redheaded Blackbelt and the Lost Coast Outpost reported that the person killed was a pedestrian. The Humboldt County Sheriff's Office identified the suspect as Eric Lively. The victim's identity is being withheld pending notification of next of kin.


On 05-03-17 Officers from the California Highway Patrol were dispatched to a fatal traffic collision in the Shelter Cove area of Southern Humboldt County. Once on scene, CHP Officers determined the collision was the result of an intentional act.

Detectives from the Humboldt County Sheriff’s Office responded and took over the investigation. Suspect Eric Lively (45 years old) was arrested and is being charged with homicide. The victim’s identity is being withheld until next of kin can be notified.