For Second Year in a Row, No Local Salmon at Klamath Salmon Festival 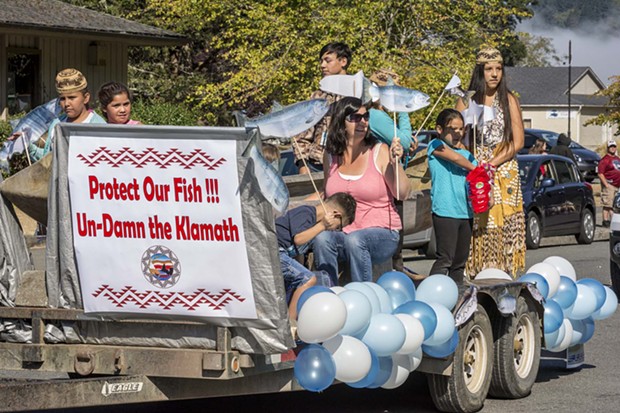 For 53 years, the Klamath Salmon Festival was a celebration of the river's bounty and the traditions of the local Yurok Tribe, with Indian card games and stick game tournaments. The games and demonstrations will return this year, but the locally caught salmon that took center stage for over half a century will not, for the second year in a row.

In a press release, the Yurok Tribe says record low salmon runs mean the tribe will purchase fish from outside the Klamath River. Last year, there was no salmon served at the event and, instead, attendees ate from food trucks. In March, the tribe suspended commercial salmon fishing after learning this year's Chinook salmon run would be the lowest in recorded history.

“The Klamath River salmon stocks are in serious trouble,” said Thomas P. O’Rourke Sr., Chair of the Yurok Tribe, in the press release. “Rather than celebrate the return of the spawning salmon, as we normally do, the purpose of this year’s festival is to raise awareness about the struggling fish runs and to rally for the salmon of the Klamath River.”

Poor salmon runs are being blamed on Ceratonova Shasta, a disease contracted by salmon in warm or slow-moving waters. According to the press release, in 2014 and 2015, up to 91 percent of sampled juvenile salmon were infected with Ceratonova Shasta. The spread of the disease is being blamed on the continued existence of the Klamath dams, four of which are scheduled to be removed in 2020. Last year, the tribe dedicated the festival to the removal of the dams.

“The Klamath salmon is as much a part of our traditional culture, as our prayers and our drums,” O’Rourke said in the release. "That is what is at stake here, the continuation of our very existence as Yurok people. That is why the health of the river is so important to us.”

See the full press release from the Yurok Tribe copied below:

Record low salmon runs have forced the Yurok Tribe to purchase fish from outside of the Klamath River for the 55th Annual Klamath Salmon Festival. This year’s Klamath salmon run, the typical source of fish for the community event, is expected to be the worst in recorded history.

“The Klamath River salmon stocks are in serious trouble,” said Thomas P. O’Rourke Sr., Chairman of the Yurok Tribe. “Rather than celebrate the return of the spawning salmon, as we normally do, the purpose of this year’s festival is to raise awareness about the struggling fish runs and to rally for the salmon of the Klamath River.”

This year’s low fish run is largely a result of poor ocean productivity, combined with substandard water quality and elevated disease rates in the river when this year’s fish run was in the juvenile stage of development. The fall run of Klamath salmon is primarily comprised of 3-year-old fish. In 2014 and 2015, up to 91 percent of sampled juvenile salmon were infected with Ceratonova Shasta, a deadly fish pathogen that favors the in-river conditions created by the Klamath dams. The water quality and fish disease issues will be
drastically reduced when the four lower dams are removed in 2020.

The Klamath River salmon is inextricably linked to the Yurok Tribe’s culture and traditions.

“The Klamath salmon is as much a part of our traditional culture, as our prayers and our drums,” Chairman O’Rourke said. "That is what is at stake here, the continuation of our very existence as Yurok people. That is why the health of the river is so important to us.”

The Yurok Tribe’s 2017 allocation, set by Tribal and federal natural resource managers, is 600 salmon, or less than one fish for every ten Tribal members. The Tribal Council decided to distribute the fish to Yurok elders and to the Tribe’s ceremonies. In normal years, the Klamath supports a sustainable subsistence harvest that is numbered in the thousands, and includes plenty of fish for the festival.

Before the Klamath salmon collapse, the Yurok Tribe put on the free, family-focused festival to unite the community in celebration of the Klamath River’s bounty and to honor the return of the fall run of the Chinook salmon. All are invited to attend the Salmon Festival.

There are two big additions to the list of events at this year’s festival. The Yurok Social Services Department is sponsoring several new activities for kids to enjoy. The Kid’s Corner will include: 4 bounce houses, zip line, bumper cars, a bubble park, face painting, snow cone/popcorn snack booth, photo booth and a fishing booth.

On Friday, August 18, five of Indian Country’s most prolific poets will perform a reading from the new book Red Indian Road West: Native American Poetry from California. Red Indian Road West is a poetry anthology covering a broad range of Native American experiences in the state. The poetry reading, sponsored by the Yurok Tribal Court, is happening at the Klamath River Book Nook from 6pm to 8pm, located at 170 Klamath Blvd.

“This book of poetry includes an array of personal perspectives on numerous issues faced by Native Americans living in the west, from the past to the present. The poets not only tell about the struggles but also give voice to culture and traditions that intertwine with contemporary life in California,” said Lucille Lang Day, co-editorof Red Indian Road West. “We look forward to sharing this amazing anthology with the community.”

The main Salmon Festival festivities are on Saturday, August 19 in Klamath, Ca. The Archie Thompson Memorial Softball Tournament begins on Saturday, August 19 at 8:30 a.m. The Saturday Salmon Festival events begin with a Klamath Chamber of Commerce-sponsored Veterans Breakfast at the Klamath Community Center on Salmon Blvd. The breakfast is free for military veterans and active service personnel. Check-ins for the Ney-Puey Run/Walk begin at 9:00 a.m. and the race starts at 9:30 a.m. The annual parade down Klamath
Boulevard is at 10:00 a.m. The Noo-re-wo-nee/Keetko Contest winners will be announced at 11:00 a.m. The salmon lunch also begins at 11 a.m. and will include wild salmon, homemade sides and a drink for $15. In order to recover the cost of the fish, the Tribe had to increase the price this year to one that is still much less expensive than a restaurant. The Indian Card Game Tournament starts at 11 a.m. at the Yurok Country Visitor Center. The Ancestral Guard, a youth organization that seeks to improve the lives of young people on the Yurok Reservation and Humboldt-Del Norte region, is hosting the traditional gambling game. The Annual Stick Game Tournament, sponsored by LACO Associates and Green Diamond Resource Company, begins at Noon. Stick Game signups
started earlier this summer, but teams can still sign up, beginning at 11:45 a.m. on the day of the festival.

The full-contact sport is played by many of the tribes in the Northern California region.
Rock band, Dr. Squid, is headlining this year’s Klamath Salmon Festival and will play its first set at noon. The Humboldt band plays a danceable blend of music that can be appreciated by anyone, regardless of age.

The Salmon Festival’s Classic Car Show, organized by George and Marla Smoker, is in its eighth year. The Car Show offers a fine collection of classy automobiles and motorcycles.

“I would like to invite the whole community to visit Yurok Country for a fantastic day with family and friends,” concluded Chairman. O’Rourke Sr.