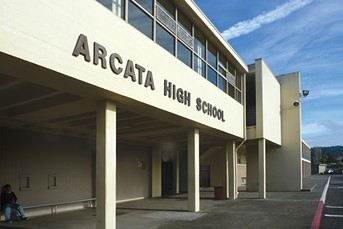 He’s a popular Arcata High basketball coach lauded for setting high standards on and off the court. She’s a social worker and mother of four who volunteered to serve on a Northern Humboldt Union High School District athletic committee. Both became the target of a single trustee who questioned whether they were qualified for those roles during a school board meeting last month.

The reasons appear to circle back to a complaint filed by Trustee Jennifer Knight’s sister after her son failed to make the Arcata High School varsity basketball team last year.

Now Knight is facing a formal reprimand by her fellow board members for what a five-page resolution of censure describes — at times in detail — as an extensive pattern of unacceptable conduct, which includes being disrespectful to parents and staff and using her position to push her sister’s grievance.

Knight canceled a scheduled interview with the Journal last week, noting she believed it was “best to first engage with the Board resolution process,” adding later via email that she was looking to move forward and continue her work with the district.

“In my effort to provide a safe place for all to be heard, I regret that I may have inadvertently gotten overheated and my demeanor was not deemed appropriate,” said Knight, a student development advisor at College of the Redwoods, before the board agenda came out.

Meanwhile, the district is taking rumors of a recall effort seriously enough that staff asked the elections office for a cost estimate, which came back at $7,500 to $9,000 if it was held in conjunction with the June primary.

Registrar of Voters Kelly Sanders said no recall paperwork had been filed as of Monday afternoon.

According to the resolution, Knight is said to have violated 10 board bylaws and policies that require trustees to act in an ethical manner, make decisions in the best interest of the district and the public and to abstain from voting when a conflict of interest arises.

The resolution states that the board “wishes to condemn Ms. Knight’s actions in the strongest possible terms available to it as a governing body” and specifically directs Knight “to abstain from voting on any and all matters which pertain to her personal or familial interests, including matters which relate to her sister’s complaint filed in December 2016, and to conduct herself in a manner becoming a representative of this community.”

While the issue has reportedly been ongoing for about two years, Knight’s conduct came to a head Oct. 10, when she attempted to block the reappointment of popular Arcata High varsity basketball Coach Ryan Bisio as well as JV Coach Graham Johnson by pulling their names from a routine list of hires.

Knight then stunned the room by publicly excoriating parent volunteer Carolyn Perkins at length, calling her “unfit” to serve on a school committee, distributing as “evidence” a nearly year-old personal email from Perkins that Knight somehow obtained that references concerns about her sister’s complaint.

“I hope you never have to experience something comparable in your life, because it was wretched,” Perkins told the board that night in an emotional statement.

She was later appointed to the committee after a second vote because the board failed to take public comment amid the confusion.

Superintendent Roger MacDonald also had some strong words at the meeting, saying he was “concerned about what’s going to happen tomorrow after we have disparaged people in the community that have chosen to come forward and support our schools.” He also noted Perkins and a fellow parent whose appointment’s Knight tried to block were the first to volunteer for the athletics board in six years.

In fact, the athletics committee almost failed to materialize after two trustees — Brian Lovell and Dana Silvernale — abstained with Knight dissenting on the first vote until the point was raised that the board had failed to follow policy and conducted a second round.

Both coaches were also later approved after a special meeting on Oct. 16, when dozens of speakers lined up to support them amid calls for Knight’s resignation or for the board to at least gain a grip on her behavior.

Trustee Brian Gerving, who brought the discussion of a censure to his fellow board members at the Oct. 16 meeting, said he has concerns about what the coaches were put through, regardless of how the situation turned out.

He said Knight’s actions are not only eroding public trust in the district and the board, but set a bad example for students and staff, noting other incidents have “bubbled up over time” involving her and the Arcata basketball program.

“This was definitely the most egregious case,” Gerving said.

In a later interview, MacDonald added that “this is not a surprise and did not come out of the blue," noting that he, past superintendents and other board members have all tried to intervene with Knight without success.