Crabs vs. Ringtails and Rooting for the Other Guy 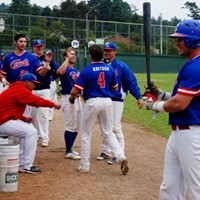 Tuesday night’s game was one of the cruelest shellackings I have ever seen in any sport. The Redding Ringtails, obstructed by the Carr fire
currently ravaging the Whiskeytown area, were only able to field nine of their own players. They picked up a 10th body, a young man from Eureka
High School known to the score reporter only as No. 37.

No. 37 played well but was of only minimal help as the Ringtails tallied more errors than hits (five and four respectively) and the Crabs cruised to a 25-0 victory in the first of a two-game series. Our crustaceans scored in seven of eight innings in which they hit, scoring a game-high seven runs in both the fifth and seventh innings, and another six in the fourth.

McCarthy Tatum went 4-6 at the plate, hit a truly gratuitous grand slam (for four of his nine RBIs) and was one double away from hitting for the cycle. Wesley Ghan-Gibson, too, was hot Tuesday night. He went 3-6 and clocked four RBIs of his own. On the other side of the ball, Alex Trautner pitched seven strong innings, striking out 10 batters and only allowing four hits and one walk. His ERA sits at a tidy 1.67. Santiago Cantu came in for the final two innings and secured the shutout.

If I had to pick a synecdoche to describe the game, it would be Bronson Grubbs beating out a pickle in the first inning. He drew a lead-off walk and got stuck between first and second when Koko Figueiredo grounded out to the shortstop. It’s exceedingly rare to see someone beat a pickle at any level past little league. Like an inside-the-park home run, something has to go wrong for it to happen. And
something did. After closing Grubbs in to a 10-foot space right between the
bases, the second baseman lobbed a ball back to his first-base compatriot. A
bit too high, a bit too slow. Grubbs turned on a dime and sped towards second,
diving under an incoming tag.

Apocryphally, Thomas Jefferson once said, “I’m a great believer in luck and I find the harder I work the more I have of it.” Tuesday night, the Crabs made their own luck and everything fell their way. And it was glorious.

Though, for most fans (especially those inclined to heckle) a game this one-sided gets a little boring. Folks get weary of harping on a losing team, especially one that shows such poise as the Ringtails. They’re not 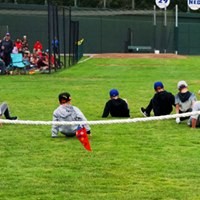 cocky back-talkers like the boys from San Leandro; they’re just a squad of dudes who like to play baseball in the summer. Luckily for us, a surprise was in store.

A Ringtail by the name of Chuck Matthey had a few good friends in the stands and a smile that could melt the Snow Queen’s heart. Pretty soon, the whole first base line was cheering (with only minimal irony)
every good play he made in right field and every at bat. And, when he took the mound in the seventh inning, it was like half the bleachers were Ringtail fans. His real friends bought him a ball and at least a dozen of us signed it. It was presented to him after the game; I’m told he loved it.

Wednesday night got off to a bad start for me. I walked in a bit late (only 15 minutes early) to find that my favorite seats had been usurped by two very nice older gentlemen. 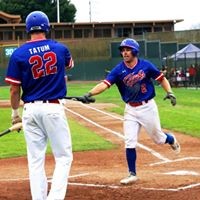 The bleachers were filling up quickly and I realized I hadn’t eaten all day, nor did I have a way to save my seat. Thank goodness for Jeff and Wendy (parents of Crabs superfan Henry, champion of the “HARDER! FASTER!” cheer), who made about 15 signs for our favorite Ringtail, Chuck Matthey. I got two and saved seats for myself and my buddy, then waded through the sea of superheroes (best theme night participation all season!) towards a delicious 7 p.m. breakfast burger.

The Ringtails were fully loaded Wednesday, the rest of their team having successfully traversed State Route 36 and made it to the ballpark ready to play. Though the Crabs struck first, taking a 1-0 lead in the first inning, it was Redding’s game to lose. They took a commanding 5-1 lead in the third inning which became 6-2 an inning later. (This pretty much put an end to the fans brief but passionate love affair with Ringtail Chuck. Signs were put away, returned and ripped up. Cries of betrayal rather than adoration echoed out each time he stepped into the box.) Their defense was stifling, their offense timely and efficient, and through the seventh inning it looked like the Crabs had been cracked. Conservation of Greatness is a real thing, folks.

Or it can be. After the Ringtails put another run on the board our boys sought the aid of relief pitcher Justin Berry. It’s always been strange to me that momentum carries over from defense to offense (and vice versa) in baseball, since the two are so segregated, but it does. And tonight it did. Berry came in with two outs and fanned his man to close the inning. The Crabbies came up and put together two hits for the first time since the fourth inning. It was to no effect, but every avalanche begins with a single snowflake.

Berry took to the mound again in the seventh and made quick work of the Ringtails, and up came the Crabbies. Connor Blair got plunked to start things off, and the scalding hot McCarthy Tatum hit an RBI double to cut the lead 7-3. Wesley Ghan-Gibson followed him up with a single and would advance to second on a throwing error by the second baseman. Tatum scored. 7-4 Crabs.

Just like that, we were back in the game. Two batters later, Connor Blair hit a soaring shot just shy of the freeway, but far enough to score Ghan-Gibson and clear the bases. It was 7-6. And then the rails really came off. Santiago Cantu singled on a gorgeous bunt 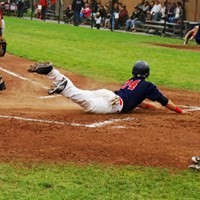 down the third base line. Jackson Kritch smoked one through the gap into left field, and took second on another bad throw. Cantu waltzed to third. Jackson O’Boy walked on four straight pitches (one of which should have been a balk, but whatever. I’m not upset at all.) Connor Blair, at the plate for the second time this inning, drew a walk that included three straight wild pitches (two that scored Crabbies—never seen that before) and it was 8-7 Crabs.

Of all things our hecklers like to sink their teeth into,
they love nothing more than a floundering pitcher. He’s on an island and things can spiral downward quickly. And let me tell you, dear reader, this kid
(and his successor) got the business Wednesday night. I’ll be dammed if it wasn’t some of the finest heckling I’ve heard in quite some time.

Each team would score two more runs in the final two but our boys’ massive seventh inning rally proved to be the difference. Crabs walked away with a 10-9 victory and the series sweep. After some stumbling, the Crabs are back on a six-game win streak and are 30-9 on the year.

Upcoming Games
The Puf Caps are back baby! Our favorite Capitalists return to Arcata this weekend for another three-game series. Crabs look to take the season series back (down 1-2 after their first meeting). Saturday is Alma Mater night. So for all you accredited folks, wear your best collegiate swag!

Cheers and Jeers
Huge Cheers to the Ringtails for driving through fire (almost literally) to come play us, and giving the Crabs two great games. Stay safe back over in Shasta County, y’all.

Jeers to the six people booted Tuesday and Wednesday (particularly the guy who tried to fight a security member — seriously dude? How foolish can you get?), bringing our total (by my count) to 20 on the year. We had been so good! And you do you expect to drop unauthorized booze under the bleachers and not get caught?

Cheers to Chuck, who stole our hearts and a couple bases.

Jeers to the lady who shoved the Chuck signs at me when someone in her party wanted to sit there. The seats were empty before and there’s about a thousand different ways to handle that situation without being rude.

Heckle of the Series
Gotta go to Jeff and Wendy for making those signs. They were on theme and hilarious (confusing too, I probably had 15 people ask me “Who’s Chuck?”). Double cheers for tearing them up when we were betrayed.