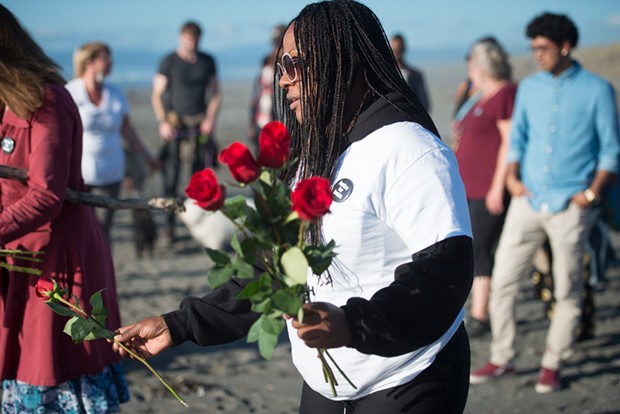 The mother of slain Humboldt State University sophomore David Josiah Lawson took to Facebook this morning to express frustration that the Humboldt County District Attorney's Office still hasn't made a charging decision in her son's case two months after the Arcata Police Department handed over its investigation.

"The Department of justice [has] identified my son's DNA on the knife that was used to stab him to death," Charmaine Lawson posted on the Justice for David Josiah Lawson Facebook page. "They have also identified my [son's] murderer on the knife, yet the case is still being reviewed. Where's the justice?"

District Attorney Maggie Fleming, meanwhile, indicated her office is still doing due diligence in determining the strength of the case in order to determine how to proceed.

David Josiah Lawson, 19, was fatally stabbed during an altercation at an off-campus party April 15, 2017. A 23-year-old McKinleyville man, Kyle Zoellner, was arrested at the scene and charged with Lawson's murder but a judge later found there was insufficient evidence to hold him on the charge and dismissed the case.

The case was again turned over to the Humboldt County District Attorney's Office Nov. 9 after former APD interim Chief Richard Ehle said forensic testing had found "unequivocal physical evidence" linking a specific suspect to Lawson's killing. Ehle declined to publicly elaborate on either the evidence or the suspect at the time.

District Attorney Maggie Fleming told the Journal on Dec. 2 that her review of the case was ongoing and would span another four to six weeks. Asked to respond to Charmaine Lawson's Facebook comments today, Fleming indicated in an email to the Journal that the evidence may not be as clear as indicated.

"The interpretation of the analysis of DNA on the knife is of course critical to the case," Fleming wrote. "That is one of the issues we found incompletely resolved in the case file we received from the Arcata Police Department, therefore we requested additional information on the analysis from the California Department of Justice. We must know what experts will say under oath about the DNA analysis to make a just decision about the case. We are also seeking additional information on a second issue. Justice would not be served by a decision by our Office that does not take into account critical existing information."

Charmaine Lawson, who has filed a claim for damages against the city of Arcata alleging APD botched the initial investigation into her son's death, has repeatedly pushed officials in the city, the district attorney's office, HSU and the California State University system to bring her son's killer to justice.

"Today makes 2 months since Humboldt County DA Maggie Fleming has received my son DJ's case from APD for review," she wrote on Facebook today. "January 15th, will be 21 months since my Son was viciously murdered ... I will not stop fighting for you my son, I promise you we will get justice. #JusticeForDJ."

She then urged supporters to call the Humboldt County District Attorney's Office and to ask Fleming, "if it was her daughter what would she do?"

Fleming declined to offer a timeline for her office's review moving forward.

"I do not have a way to provide a timeline because justice would not be served by making a decision without all the information we need and I'm not in control of when we will receive it," she wrote.

A vigil for David Josiah Lawson is planned on Jan. 15 at Arcata City Hall, on the 21-month anniversary of his death.

A version of this story first appeared at www.kympkemp.com.