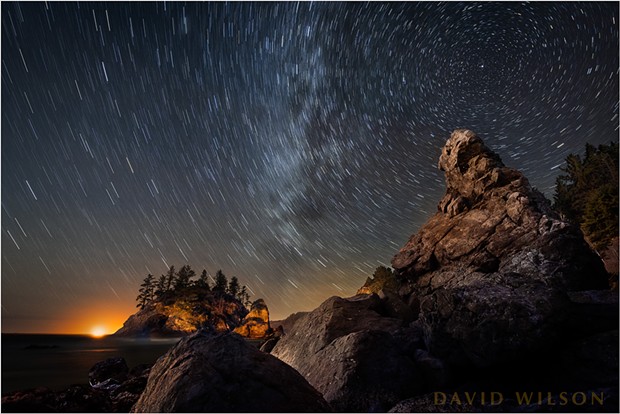 It was nearly dark when I arrived at the Trinidad Head parking area. Sunset gazers had seen the sun set some 45 minutes earlier and were heading for their cars when I struck north up the beach. Night was descending and in the waning light I could see the footprints of the evening’s activity in the sand. Low tide would be in a little over half an hour. My destination was Grandmother Rock, a huge rock in the apparent profile of a figure forever staring out to sea.

Only a faint glow remained over the western horizon, and stars were beginning to show all over the sky. The crescent moon hanging over the Pacific would set in about an hour and helped cast a delicate glow on the world. The retreating tide’s fresh sand was a faint lightness stretching out before me, and I was making the only marks in the new smoothness. Rocks and driftwood slipped by as shadows beside my soft tread. It was dark enough to tempt my flashlight but to do so would have set back my night. I continued without it.

I think about mountain lions when I’m out there at night, particularly if I’m alone. It freaks me out. But for some reason I reasoned they wouldn’t be looking for me at the beach. I’m not sure there was any reason in that at all, really, but I did note that the wind was coming from the shore, so I knew they wouldn’t smell me. I didn’t read all those Tarzan books for nothing.

I heard water ahead. I’d forgotten about the creek. I could make out its shape as I approached. Close across the stream loomed the towering form of Grandmother Rock, but I needed to cross to get the angle I wanted. Mill Creek isn’t especially large but in early February it was certainly in healthy condition and was too wide to jump across. I looked around. Maybe I could find a way over there.

My heart slammed into my chest and I froze. The splash was close. A fish? It seemed too large. I had been walking without my light, and I saw little more than shadows as I peered toward the sound.

It didn’t sound like a critter’s splash this time. I turned on my light, already figuring what it was: the sandy sides of the creek caving in as the stream eroded them. You know the miniature cliffs that are fun to help cave in when you’re a kid. I might still be one.

With the light on I saw that I wouldn’t be able to cross without getting wet, and there was no way to line up the shot that I wanted from this side of the creek. There were some rocks I could have used to hop across but not all by myself in the dark, carrying a camera bag, a large tripod and wearing a pack. That seemed like a bad idea easily avoided, the kind of thing one might read about in the news blogs the next day.

So I would ford the stream. I took off my shoes and socks, rolled my pants up over my knees, and waded across. This had not been in the plan. It was about 40 degrees out, and don’t tell the Midwest folks, but it felt cold. And now my feet were going to be wet and my socks were going to have sand in them and I would have to do it all again on the way back, too. Ah, photography!

I set up just on the other side of the creek.. Grandmother Rock sits atop a pile of huge rocks, the chunks of stone that Mother Nature had chiseled away from what once had been a gigantic boulder as she sculpted Grandmother’s contemplative figure.

I had one idea for a photograph in my mind for this trip: a long exposure with the north star Polaris above Grandmother’s head. In a long exposure from that angle, the trails made by the stars would create rings around her that could represent different things to different people. I also wanted Pewetole Island in the image if possible. I found a single spot that would give me that angle: it was on the steep side of a sloping boulder but from there it would all fall into line. I climbed up, wedged my tripod in and perched there next to it.

I stayed in that spot for almost an hour and tried different exposures and slightly different angles, some zoomed in, some zoomed out. The lights of half a dozen fishing boats shone across the horizon, sometimes themselves directing beams of light toward me bright enough to throw shadows. The fading moonlight and the final vestiges of dusk’s glow on the horizon cast the softest of light onto the shore.

The star trail image I’m sharing here was a 699-second exposure. The star trails you see show how far the stars moved across the sky as Earth’s globe rotated beneath me. Watching the stars turn I could feel I was on the surface of the Earth, the light of their myriad billions falling upon my face as the planet revolved beneath me.

I would have stayed longer to make more images but for a couple of considerations. One was that by then the tide had been coming in for half an hour and was beginning to send waves up the beach to the rock I was using, and the other was that I’d told my mom I’d come watch the second half of Warriors game with her. I packed up, climbed down, removed my shoes and socks, rolled up my pants, forded the creek again and headed back down the beach.

(And the Warriors won.)