Crabs Smash Potters and a Record 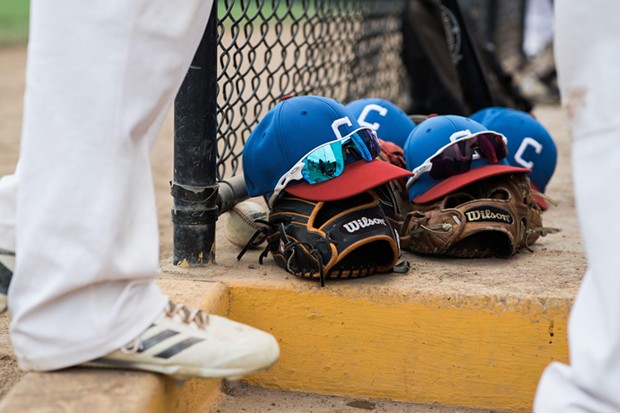 He did it. HE FINALLY DID IT. Damian Henderson hit his 10th home run of the year in the bottom of the third inning Friday evening, breaking the 13-year record set by Brian Blouser. It was a frozen rope to right field that nearly busted the scoreboard. Henderson went tearing down the base path, watching the ball sail toward the fence. It cleared the 320-something feet easily and his hand shot up in joy.

“You have no idea how happy I am,” Henderson said after the game, an uncontrollable toothy smile plastered across his face. “I told myself the day I got here that I was going to break the record and I’m just so happy I did it. ... it was such a weight off my shoulders.”

For the past three weeks Hendo has been swinging at the ball like it cursed his mother. He wanted that record. He needed that record. It brought his batting average under .400 to a paltry .390, and gave Bryce Kirk time enough to unleash a biblical flood of home runs and hop right on his tail.


Kirk, for his part, stepped up to the plate and knocked his ninth home run of the year on the very first pitch. “When Bryce got back to the dugout he just looked at me and said, ‘Game on’,” Henderson said. Ladies and germs, we’ve got a proper race on our hands. It’s not every year that we have not one but two players break a record on our field.

Hendo and Kirk weren’t the only Crabs to go yard in the 10-4 rout of the Lincoln Potters on Friday. Riley Clearly uncorked a towering three-run shot an inning before the first of his five RBIs that night.

The Crab’s 12-game win streak ended Saturday night with a 4-3 loss wherein the Crabs nearly had more errors than hits (six and seven, respectively). It was a sloppy, dragging bummer of a game that looked much more like the effete Crabs of early June than the vise-grip powerhouse we’ve seen this month. I had dreams of our boys rattling off a 19-game win streak to cap off this record-breaking year. But those dreams are dead now. Kaput. Nixed. I’ll have to settle for a six-game streak. Humph.

Saturday was a baffling game. The Potters scored four runs on four hits, the Crabs kept running on their catcher (who had an absolute cannon and kept getting, predictably, gunned down) and seven out of nine innings were three-up, three-down for the Crabs. But Sunday had something I’ve never seen before: a walk-off error.

The Potters were in control for almost the entire game. They were beating our pitchers up and the Potter infield was tight as ever. Their right and center fielders each made absolutely breathtaking diving catches and it looked like the Crabs were set to lose two in a row to the same team since early June.

Then Hendo knocked an RBI single in the bottom of the ninth to tie the game. Like Gandalf, he shows up at the turn of the tide. He stole second almost immediately and advanced to third on a Bryce Kirk sacrifice fly. That’s when it happened. The right fielder trying to pick Hendo off but his throw was low and wide, sneaking just under his third baseman’s glove. For the second time that weekend, Hendo’s clenched fist shot up in the air as he sauntered home and the Crabbies won it 6-5. Hell of a game. Hell of a series.

Coming up next week, we’ve got a split series against the B52s. On Tuesday, for the first time, the Crabs will be heading to Bomber Field in Eureka. The band will be there so lets get Crabs fans out in droves. Wednesday’s game will be held at the Arcata ballpark.

Heckle of the Series
Congratulations to Drew from the Top Shelf for his equally goofy, equally vicious invective towards an especially poor umpire: “Hey Blue, I found your phone, you got a couple missed calls!”

Cheers and Jeers
Cheers to the horde of extremely well-behaved tiny children in attendance this weekend. Definitely more babies than I can recall seeing at the park in a while and they were all super good. (I wish we could say the same for their parents.) There was even a baby wearing the same Hawaiian shirt as me on Aloha Sunday.

Jeers to the dad who kept shouting heckles right past his tiny baby’s ear. I know nothing about parenting but that can’t be good.

Cheers to the older couple dancing their keisters off on Friday night. We should all be so lucky in a partner.

Jeers to yours truly for being a potty mouth on Friday. I got excited. Apologies, dear readers.

Cheers to the Potters for bringing their mascot to town, and for plunking their own bus with a foul ball. Don’t park there!

Naughty List
No casualties this weekend. Good job, everyone!