November 12, 2019
comment
Four teenage surfers came to the rescue of a 15 year old and 20 year old who were in severe distress Nov. 11 after being swept out by a rip current off Trinidad State Beach.

According to Humboldt County Sheriff’s Office spokesperson Samantha Karges, a call came in around 1:30 p.m. reporting that the swimmers, both from Shasta County, were in trouble.

The surfers — off-duty California State Parks lifeguard Adrian York and Spenser Stratton, Taj Ortiz-Beck and Narayan Weibel, two of whom were junior lifeguard participants — were able to put the swimmers on their boards and bring them safely to shore in teams of two.

At 16, York just made the minimum age cutoff to become a lifeguard and was recently certified after undergoing rigorous training with five others from the North Coast down in Huntington Beach.

“We’re are very proud,” says Keven Harden, a supervising ranger at Patrick’s Point State Park who oversees the junior lifeguard program. “To see this ending. . .. This was our vision of the program.”

York, he says, swam back to shore to make sure 911 was called before heading back out to swimmers. 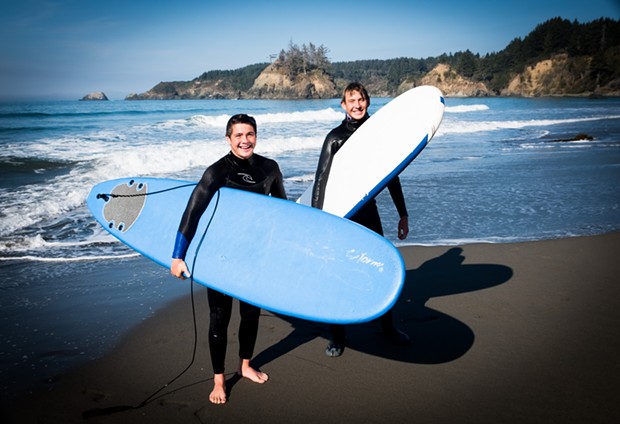 Harder says the water was around 50 degrees that day, making extremely difficult even for the best of swimmers without the right gear.

“That takes the fight right out of you,” he says, adding that he was among the first responders, arriving at the scene within six minutes of the 911 call. “We were relieved to see our own kids were there already having made the rescue.”

Harder says he talked with one of the swimmers afterward, who said he was barely able to keep his mouth above water when the teens arrived on their boards.

“They were very close (to not making it),” he says.

He and Karges noted that dangerous water conditions can occur at any time.

“If it were not for these heroic surfers, this event may have ended tragically,” she wrote in an email to the Journal.

Antonio Llanos, who was at the beach with his daughter, says he called 911 after hearing shouts for help coming from the water at the same time as the surfers began heading out to the distressed pair of teenagers, who were about 50 feet offshore and out past the breakers.

Llanos says the surfers were out by Trinidad Head and had to paddle several hundred yards to reach them.

“They were definitely struggling to get in and they were not getting in, but the fog made it really hard to see what was going on,” he says.

Llanos says another person who was on the beach donned a wetsuit and also headed out to the teens, who were dressed in shorts and T-shirts not meant for the cold temperatures of the North Coast’s water.

While he spoke with a dispatcher, who stayed on the line with him, Llanos watched the rescue unfold, noting he called 911 right away because he knew time was of the essence in these cases.

First responders arrived on scene soon after the four surfers brought the teens safely back to shore.

“Everyone was giving each other hugs but they definitely looked shook up and happy to be on dry land,” Llanos says.

Moments like that show how important programs like the junior lifeguard can be and Llanos says he’s thankful he witnessed a happy ending rather than a tragic event.

“They definitely deserve some recognition because that was an amazing rescue and they definitely saved those kids lives,” Llanos says.