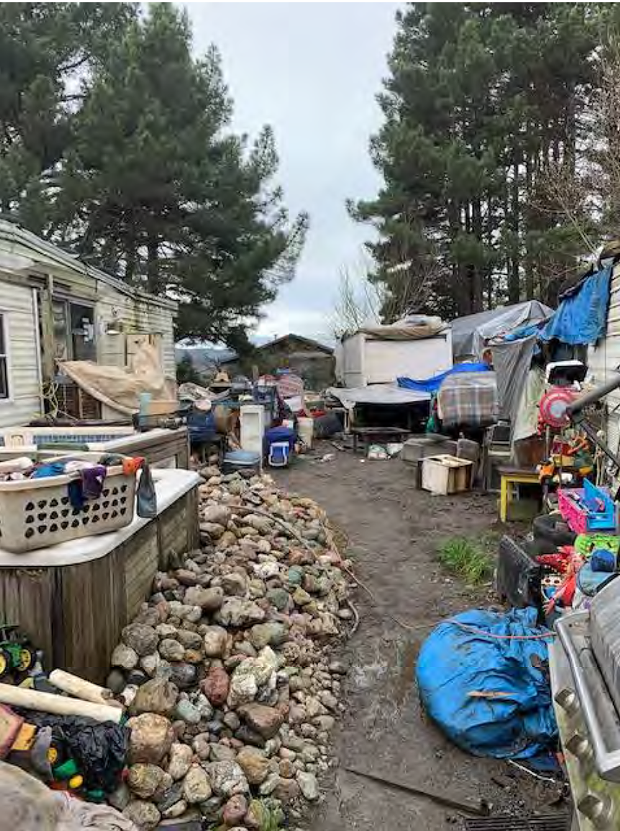 UPDATE:
The Fortuna City Council voted unanimously last night to deny Floyd Hoisington’s appeal of the city’s decision to declare his property in the 1300 block of Rohnerville Road a public nuisance and to order it abated at Hoisington’s expense.

But the council also granted Hoisington a bit of a reprieve, giving him until March 3 to dispose of hazardous materials on the property, establish residential water, sewer and electric service, and bring electrical wiring up to code. If he can meet that March 3 deadline, the council directed staff to work with him on a timeline for completing other work, which includes mold and mildew remediation, clearing of accumulated trash and debris and structural repairs. But if Hoisington fails to complete the work required by the deadline, the council’s action would allow the city to step in and clean up the place while billing Hoisington for the expense.

At a special meeting tonight, the Fortuna City Council will consider an appeal of a finding that a residence in the 1300 block of Rohnerville Road constitutes a public nuisance that needs to be abated.

The hearing comes nine years after the property and its owner, Floyd Hoisington, were featured on an episode of the television show Hoarders and almost a year after the city began abatement efforts there. Specifically, City Manager Merrit Perry upheld findings that the property contains unsafe wiring, an “illegal gravity-fed water system that discharges” wastewater into the city’s sewer system without an account or permission, dilapidated structures, evidence of an illegal water diversion and hazardous materials stored in dilapidated vehicles. Additionally, inspectors reported finding “extensive trash, debris and dilapidated vehicles … throughout the site.”

The city ordered Hoisington to clean up the property in November but a January inspection found the conditions persisting and Perry declared the property a nuisance and ordered it abated at Hoisington’s expense. He’s filed an appeal of that order, which will be heard by the council today at 5 p.m.

In a hand-written seven-page letter to the city informing it of the appeal, Hoisington states that in addition to being his longtime residence, it is also the Tree House Christian Private School and a church, “commonly known as The Church of the Children, The Church of the Soldier and The Church of the Lost Word of Jesus Christ,” of which he is the reverend. Referring to himself in the third person, Hoisington notes the “reverend is known for being a kind man who will go out of his way to help someone and is a good and loving father and, if you need something, he can probably find it for you. And liked by his neighbors.”

“He is also a very well-known and powerful voice on social media as a conservative Republican and advocate of the United States Constitution and all of the rights and protections it affords the people of this country,” he wrote. “And is dedicated about educating people about the true agenda and the evils of socialism and exposing the dangers of socialism and the lies they spread.”

Hoisington alleges the city has violated his due process rights and falsified reports in a “malicious” and “fraudulent action.” In a previous letter to the city in November, requesting additional time to clean the property and address the violations, Hoisington writes that he is disabled and on a fixed income of $948 a month, and also that both he and his son were recovering from recent surgeries.

“This abatement case is proof of fraud and widespread government corruption and conspiracy in an attempt to steal a much needed piece of land for a future development project,” Hoisington writes in the most recent letter.

Staff is recommending that the council reject Hoisington’s appeal, uphold the declaration of the property as a public nuisance and order that it be abated at Hoisington’s expense.

This isn’t the first time the condition of Hoisington’s property has thrust it into public view. He and his residence were featured in an episode in the third season of the popular television show Hoarders that aired Aug. 3, 2011. In that show — which saw Child Protective Services remove a child from the Hoisington’s residence due to the condition of the property — Hoinsington conceded the situation  had been in decline for a decade.

Dubbing himself a collector, he said the problems began when he purchased five storage units full of stuff at auction for only $20. Touring the show’s producers through the property, he pointed out “valuables” and oddities, from rock collections to a taxidermy sea turtle. He also shows off a sizable gun collection, saying, “I try to have a gun for every occasion.”

“I’ve got a bunch of other stuff here that I know somebody will someday come by and say, ‘Hey, I need that,’ and whip out a big wad of cash.’ That’s what we’re hoping for,” he said.

The show brought in a licensed psychologist, Rebecca Beaton, to speak with Hoisington.

“The smell in his house is unbelievable,” she said after finding rampant mold and rotting food in the double-wide trailer. “I’ve been in many hoarding homes and the stench in this one is the worst I have encountered.”

The show then followed Hoisington’s progress as he, an organizational specialist and a work crew cleaned the property over the course of about four weeks, during which he says they remove four Dumpsters of trash and debris. The show concludes when Hoisington’s child is returned to his custody and the place looks markedly better.

Photos included in the staff report for tonight’s meeting show the property once again cluttered with debris, dilapidated vehicles and trash. 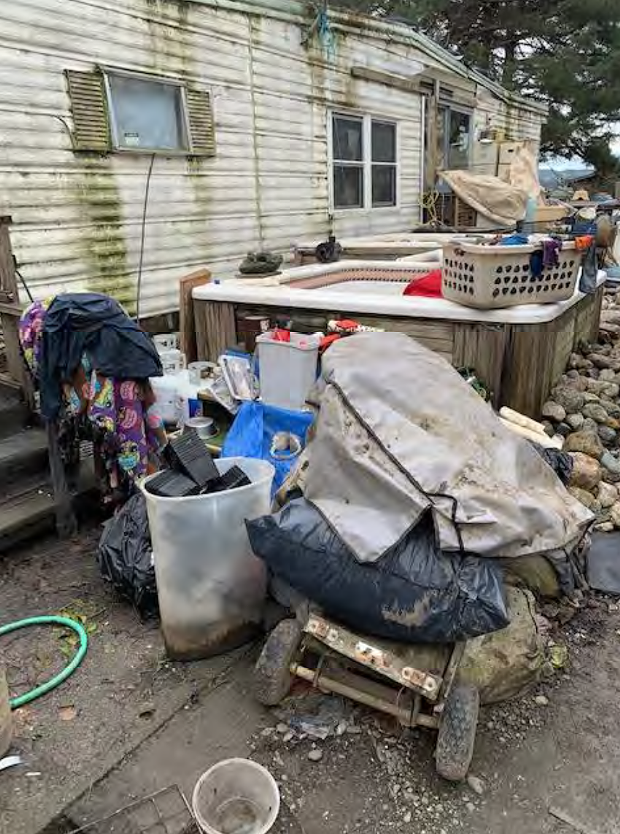