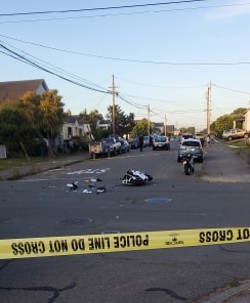 A motorcyclist died yesterday after a collision with a van at Union and West Hawthorne streets around 8 p.m., according to the Eureka Police Department.

The man, whose identity has not yet been released, was unresponsive when officers arrived and he was pronounced dead at St. Joseph Hospital, according to a news release. The driver of the van also suffered injuries and was taken to the hospital for treatment. The case remains under investigation.

Read the full EPD release below:

On 6-18-20 at about 7:58 PM, officers of the Eureka Police Department responded to the intersection of Union and W. Hawthorn Streets for the report of an injury traffic collision involving a van vs. a motorcycle.

Upon arrival, officers located the motorcyclist unresponsive in the roadway. Also located at the scene was the driver of the van and multiple witnesses. The first officer on scene began giving the motorcyclist CPR until lifesaving efforts were taken over by arriving medical personnel. The motorcyclist was eventually transported to St Joseph’s ER where he was pronounced deceased. The driver of the van was also transported by ambulance to St Joseph’s ER to be treated for injuries he sustained during the collision.

Based on evidence at the scene and multiple witness statements, preliminary findings indicate that prior to the collision the van was crossing Union Street, eastbound on W. Hawthorn Street, when the motorcyclist was traveling northbound on Union Street at a high rate of speed.

Anyone with information regarding this collision is urged to call Sgt. Greg Hill at 707-441-4355.