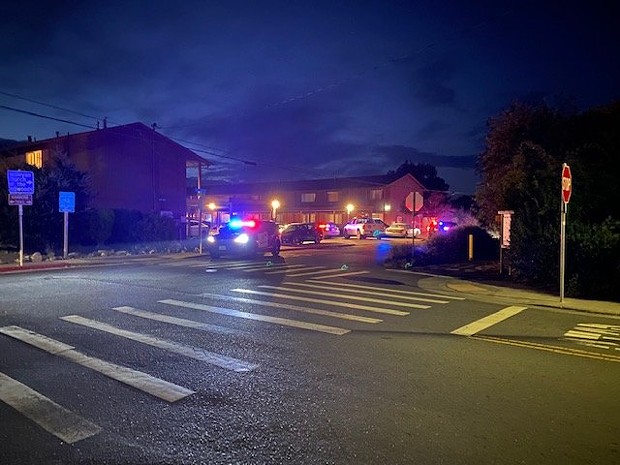 The Humboldt County Sheriff’s Office today identified the man arrested after a hostage situation and standoff on the 1600 block of Fisher Avenue in McKinleyville last night as 30-year-old Jesse David Brucklacher.

According to a news release, Brucklacher was taken into custody by the SWAT team just after 12:30 a.m. following a multi-hour incident that began around five hours earlier as a domestic disturbance call with a woman being held against her will.

After deputies arrived on scene, Brucklacher told them he had a gun and threatened to kill the woman and deputies, the release states.

The 26-year-old woman was eventually able to escape through a window and was escorted to safety. She sustained some minor injuries, according to the sheriff’s office.

Click here to read a detailed account of how the situation unfolded over the evening and into the early morning.

Brucklacher was treated for tear gas exposure at the scene and booked into the Humboldt County jail on suspicion of false imprisonment, inflicting corporal injury on a spouse and resisting arrest. He is currently being held without bail.

On Sept. 18, 2020, at about 7 p.m., Humboldt County Sheriff’s deputies were dispatched to a residence on the 1600 block of Fisher Avenue in McKinleyville for the report of a domestic disturbance resulting in a female victim being held against her will by her partner inside.

When deputies arrived at the residence, the suspect, 30-year-old Jesse David Brucklacher, refused to open the door and began yelling at deputies out of the window. Brucklacher told deputies that he was in possession of a firearm and threatened to kill the 26-year-old victim and deputies with it.

Brucklacher then began barricading the exits of the residence and continued to prevent the victim from leaving. Humboldt County SWAT, the Humboldt County Crisis Negotiation Team and the HCSO Bearcat were deployed to assist in rescuing the victim and negotiating with the suspect for a peaceful surrender.

Residences adjacent to the suspect’s location were evacuated and nearby residents were instructed to shelter in place for safety purposes. After approximately two hours, the victim was able to escape through a window of the residence.

Just after 12:30 a.m., SWAT deputies deployed tear gas into the residence and Brucklacher surrendered to deputies. Neither deputies, Brucklacher or the public were injured during this incident. The female victim sustained minor injuries from Brucklacher.

Brucklacher was treated on scene for exposure to tear gas and then was booked into the Humboldt County Correctional Facility on charges of false imprisonment (PC 236), inflicting corporal injury on a spouse (PC 273.5(a)) and resisting arrest (PC 148(a)(1)). He is currently being held without bail. Anyone with information about this case or related criminal activity is encouraged to call the Humboldt County Sheriff’s Office at (707) 445-7251 or the Sheriff’s Office Crime Tip line at (707) 268-2539.