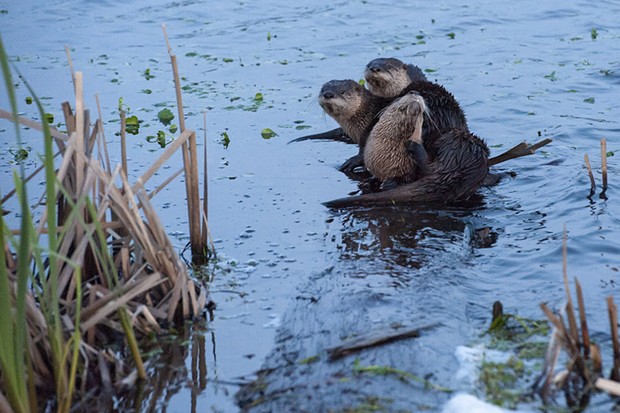 Once COVID-19 closed down the Humboldt State University campus, professor Jeff Black realized he wouldn't be walking to campus for his wildlife lectures, so he decided to get his daily exercise by going to the Arcata Marsh, while also keeping an eye out for otters.

And, he's asking others to do the same.


Spearheaded by Black, the River Otter Citizen Science Project started in 1999 looks to describe the distribution and populations of otters in the coasts, wetlands and watersheds of Humboldt, Del Norte and adjacent counties. Anytime residents or visitors spot an otter at any of these locations, they can document the data by reporting it on the River Otter Citizen Science website.

Out of the hundred times Black estimates he's visited the marsh in recent months, he says he's spotted otters about 80 times, maybe due to luck or because he’s learned a lot about how to find otters and the places where they tend to gather.


Since he began visiting the Arcata Marsh at the beginning of the pandemic, Black has seen two otters with a pup (he says if there was a way to grab the DNA of the second otter, we would be able to see that the otter is the daughter of the mother otter and  helping her with her newborn pup, as recent studies have shown). Black says he has seen the mother otter teach her pup where to hunt for food at different areas of the marsh.

Black has also seen a group of seven otters come through the marsh from Humboldt Bay, and a group of four hunt for food.

“It’s been really fun seeing the otters making use of the marsh,” Black says.

Black says that the number of otter sightings at the marsh haven’t changed during the pandemic, with about 400 sightings being reported to the River Otter Citizen Science Project — the same as past years.

With that being said, the city of Arcata recently reminded visitors and residents alike of the need to drive slowly near the marsh, especially on I Street, with not just otters but other wildlife making their way across local streets.

If you see an otter, no matter where you are, report it to the HSU’s River Otter Citizen Science Project here.