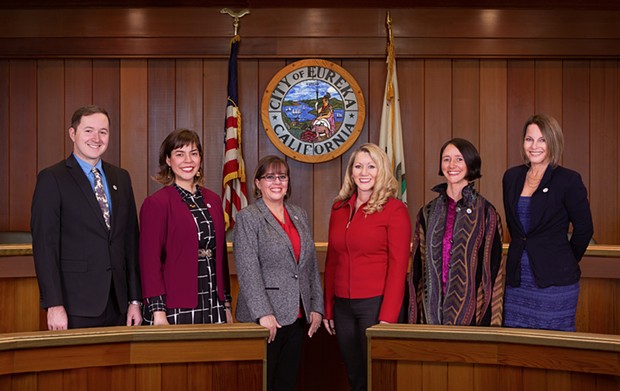 The Eureka City Council will consider Tuesday whether to begin each of its meetings with a public acknowledgement that it is taking place on "uncededed" Wiyot land.

"The city of Eureka acknowledges that we are located on the unceded ancestral lands of the Wiyot Tribe," reads sample land acknowledgement language, which the council directed staff to put together at its Oct. 6 meeting. "Please join us in acknowledging this fact as we work and meet together today."

If approved, the land acknowledgement would be included in every city council agenda and read aloud during each meeting after the roll call of council members. In a staff report, City Clerk Pam Powell explains the acknowledgement is a show of respect.

"Tribal land acknowledgement is a formal statement that recognizes and respects Native American peoples as traditional stewards of this land, and the enduring relationship that exists between Native American peoples and their traditional lands," she writes. "To recognize the land is an expression of gratitude and appreciation to those whose homelands we reside on and is a recognition of the original people and nations who have been living and working on the land since time immemorial."

Last month, the city of West Hollywood approved a land acknowledgement, with Mayor Lindsey Horvath explaining, "In countries such as New Zealand, Australia, Canada and among tribal nations in the United States, it is commonplace, even policy, to open events and gatherings by acknowledging the traditional Indigenous inhabitants of that land."

The city of Toronto implemented a land acknowledgement — acknowledging the "traditional territory of many nations, including the Mississaugas of the Credit, the Anishnabeg, the Chippewa, the Haudenosaunee and the Wendat peoples" — back in 2014 and updated it in 2018 with "evolved" language.

If the Eureka City Council approves the land acknowledgement Tuesday, it will come almost exactly a year after it voted to return 200 acres of Tuluwat Island in Humboldt Bay back to the Wiyot Tribe from which it had been stolen more than 150 years earlier. It's believed to the be first time a local government in the United States has voluntarily returned land stolen from Native people.

In other matters, the council will consider codifying the Eureka Police Chief's Advisory Panel introduced by former EPD Chief Andrew Mills in 2015. If passed, the informal panel would become a Citizens Advisory Board, with duties and responsibilities outlined in the city code. Under the proposal, board would be made up of seven members appointed by the mayor and would review complaints against EPD officers, provide input to EPD Chief Steve Watson on policies and procedures, field complaints from the public and report annually to the city council. It would be bound by confidentiality agreements so it could review EPD personnel documents and would not have any ultimate authority over the discipline of officers or department policy, nor the ability to subpoena testimony and documents.

"The board will serve as an advisory body to the chief of Police," Watson wrote in the staff report. "The board will give counsel, support, advice and recommendations to the chief of police for the purpose of improving transparency and accountability while building trust and fostering strong police-community relations."

Also on Tuesday's agenda are ordinances aimed at making it easier to create efficiency dwelling units (tiny homes) and electric vehicle charging stations within city limits, an update on the Broadway corridor plan and awarding a bid to build 107 units of affordable housing on city-owned property.

Find the full agenda, as well as details about how to attend the meeting virtually, here.