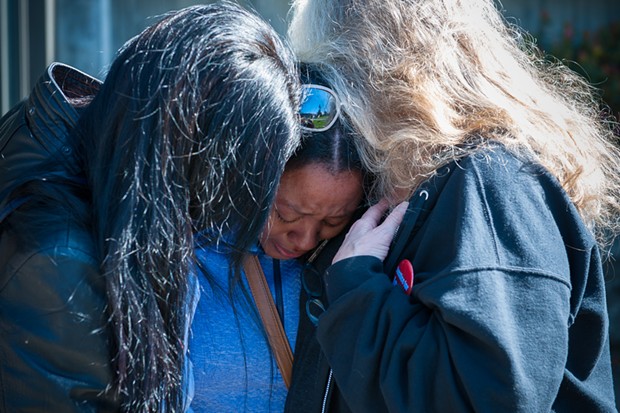 Charmaine Lawson still hasn’t cashed the $200,000 check that came as a part of her settlement agreement with the city of Arcata. She says it took her four days to even open the envelope it was mailed in and it has now sat for weeks atop her son’s urn.

Filed in November of 2018, the lawsuit alleged the city and its officials violated Charmaine Lawson’s equal protection rights by inadequately and incompetently investigating the April 15, 2017, stabbing death of her son, 19-year-old David Josiah Lawson, with racism and bias contributing to what the suit described as the city’s “deliberately indifferent” policies and practices related to the case. The settlement agreement — which in addition to the $200,000 payment includes the city making a $25,000 donation to the David Josiah Lawson Memorial Scholarship fund and agreeing to the painting of a memorial mural — was reached in April but announced by the city yesterday, about a week after a federal judge officially dismissed the case.

Speaking to the Journal, Charmaine Lawson said the settlement isn’t about the money but her desire for all parties involved to focus squarely on bringing her son’s killer to justice without the distraction of a trial that was scheduled to begin later this year.

While the settlement agreement — a copy of which the Journal obtained through a request under the California Public Records Act — describes the $200,000 payment as “compensatory damages,” the city does not admit any wrongdoing and specifies that liability for the “incident is disputed,” describing the agreement as a “compromise.”

As to the mural, the settlement stipulates that the city has granted approval for one to be created but states it will work with Charmaine Lawson to figure out the details moving forward, including where it will be located, how big it will be and how it will be funded.

More than four years have passed since David Josiah Lawson was found bleeding from fatal stab wounds outside a house party in Arcata shortly after 3 a.m. after several fights broke out. His killing remains unsolved. A then-23-year-old McKinleyville man, Kyle Zoellner, was arrested at the scene and charged with Lawson’s murder, but a judge dismissed the case several weeks later finding police hadn’t collected sufficient evidence to justify the charge and a criminal grand jury convened in 2019 declined to indict anyone in the case.

As documented by the Humboldt County Civil Grand Jury and the National Police Foundation, the Arcata Police Department’s investigation has been plagued by initial failures to secure and manage the crime scene or bring in allied agencies to assist the investigation. It has since reportedly been hampered by a lack of witness cooperation.

Charmaine Lawson and APD Chief Brian Ahearn continue to call on anyone who was at the party the night David Josiah Lawson was killed to come forward and speak to investigators, saying every account of what people heard and saw that night — no matter how insignificant to the stabbing itself — is crucial in helping investigators piece together the puzzle of what happened. They ask anyone who attended the party that night or has information about the case to call (707) 825-2590.

There is currently also a $55,000 reward for information that leads directly to the arrest and conviction of the person responsible for Lawson’s killing.

Responding to a request for comment on the settlement, Charmaine Lawson texted a photograph before speaking to the Journal. It shows a small shrine honoring her son, with his guitar standing alongside his smiling portrait, a string of rosary beads and his posthumous diploma from Humboldt State University, all of which surround his urn, atop which sits the still unsigned $200,000 check.

“I just want to focus on bringing justice for my son,” Charmaine Lawson said. “I call that check blood money. As you can see, it’s not signed. It’s blood money. It means absolutely nothing to me.”