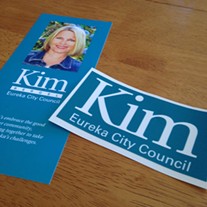 When the Journal spoke to Humboldt County Registrar of Voters Carolyn Crnich after midnight, she estimated 1,000 or so ballots may have been dropped off at the Humboldt County Elections Office on Monday and Tuesday and remained uncounted. In a follow up conversation this afternoon, Crnich said it turns out the Elections Office received about 3,350 ballots, which could potentially change everything in a race that Bergel currently trails in by just 104 votes.

Earlier, we estimated that there would need to be at least 1,200 ballots outstanding in the race to give Bergel a reasonable shot at overtaking Newman. Well, that now seems very possible.

Crnich said about 707 ballots — 236 provisionals and 471 vote by mail — came into Eureka precincts on Election Day that have yet to be counted. Now we learn that there’s another 3,350 that came into the elections office and have yet to be tabulated. If we assume those ballots are representative of the county’s overall registration numbers, about 19 percent would come from Eureka voters, or about 636 ballots. If that holds true, there’s potentially somewhere in the neighborhood of 1,343 ballots uncounted in the race. Bergel would need to pull 53.89 percent of those to take the lead. She took 54.13 percent of the Election Day vote, but just 42.87 of the early vote-by-mail ballots.

It looks like this thing’s far from over, though Crnich said county elections office has to conduct an audit and other procedures before it can even get to sorting and counting those 3,350 ballots the office received Monday and Tuesday. So, it’s going to be a while before this race crystallizes.


PREVIOUSLY:
With the dust still settling from Election Night, Eureka Ward 3 challenger Kim Bergel sits 104 votes behind incumbent Mike Newman in a race that has already seen 5,309 ballots counted. It’s a slim margin, but does Bergel really have a shot at pulling the upset? Let’s look at the numbers.

Humboldt County Registrar of Voters Carolyn Crnich told the Journal early this morning that some 471 vote by mail ballots were dropped off on Election Day at Eureka polling locations, where another 236 provisional ballots were cast. Now, assuming all those mail-in ballots are actually from Eureka voters and that all those provisional ballots prove valid — and that none of those voters left the Ward 3 contest blank — that means at least 707 votes remain uncounted in the race. Additionally, Crnich said there could be another 1,000 or so vote by mail ballots that arrived at the county elections office Monday and Tuesday that have yet to be sorted.

Let’s start with the 707. If Bergel is to make up the 104-vote gap, she would need to win 406 of those votes. That would be 57.4 percent. She pulled only 42.87 percent of the vote on the mail-in ballots that have already been counted and 54.13 at the polls on Election Day, so that seems a tall order.

But let’s factor in those other potential 1,000 or so ballots. If those ballots are representative of the county’s overall registration numbers, then about 19 percent would come from Eureka voters, or about 190 ballots. If we add those to the 707 we just discussed, we get 897 ballots. To make up 104 votes in that scenario, Bergel would have to pull 55.85 percent of the vote.

Basically, in order to pull this thing out without some statistical anomaly in the voting patterns — or to win while pulling the same 54.13 percent of the vote she got at the polls — Bergel would need there to be more than 1,200 ballots outstanding in the race. That seems unlikely.

But consider this: Four years ago, when Newman edged out Ron Kuhnel to take the seat, 1,825 votes showed up in the final tally that weren’t recorded in the final Election Night summary. But before Bergel supporters get too hopeful, it should be made clear that those numbers are from an election that saw 66 percent turnout in Humboldt County. The preliminary tallies Tuesday show just 39 percent of those registered casting ballots.

So, the short of it is that Bergel has a steep hill to climb and you can bet she’s hoping for a flood of Eureka ballots to materialize from somewhere as the math gets better for her as the number of outstanding ballots increases. Meanwhile, it’s a safe bet Newman and his supporters are hoping the majority of those 707 vote by mail ballots dropped off in Eureka are really from Garberville voters who just happened to be passing through town and that the bulk of those 236 provisional ballots don’t qualify.

With anything less than 1,200 votes outstanding, Newman seems a lock to keep his seat.

And, because we've been sitting on this tidbit and this might be our last shot to use it, we'll note that if Bergel does somehow pull this thing out, it would result in what we believe is the first all female city council in Eureka's history. After consulting with a couple local historians and Eureka City Clerk Pam Powell, all seem pretty sure five women have never governed Eureka together. (It should be noted that under Eureka's form of government the mayor isn't officially a member of the council).

A Bergel win would result in a council composed of Melinda Ciarabellini, Linda Atkins, Marian Brady, Bergel and Natalie Arroyo, who handily beat incumbent Chet Albin to take the city's Ward 5 seat. Powell provided the Journal with the city's official council record, which dates back to 1955, and it looks like the closest the city's ever come to is in the 1990s, when four of five council seats were occupied by women. What exactly happened between when Eureka incorporated as a city in 1874 and when it began keeping official council records in 1955 isn't entirely clear, but nobody consulted by the Journal felt it likely the city was run by five women back then.