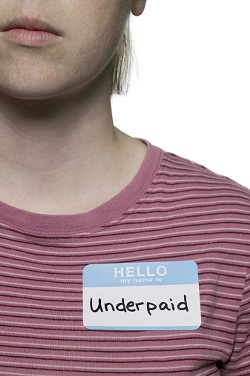 Many of Humboldt County’s lowest-earning workers stand to see their lots improve over the next six years, as the California minimum wage increases to $15 per hour.

A bill, signed into law by Gov. Jerry Brown earlier this month, will increase the state minimum wage from $10 to $10.50 on Jan. 1, 2017, to $11 in 2018, and then by $1 each subsequent year until 2022. The increase comes as New York signed a similar bump, and following municipal wage raises around the nation, including in San Francisco and Los Angeles.

What does this mean for local businesses and workers? It’s hard to say at this point.

In 2014, Eureka voters declined a measure that would have raised the minimum wage to $12 per hour for large employers in the city limits. Proponents cited high poverty rates in the city: 23.5 percent of the population lived in poverty according to 2014 Census Bureau date, higher even than the 21 percent countywide figure. Critics said it was unevenly applied to large business and geographically unfair: businesses would flee Eureka, they said.

Now, with a state mandate, those businesses given reprieve by Eureka voters will have to find ways to cover increased labor costs, including small businesses, though companies with fewer than 26 employees get an extra year to come into compliance. Brown, signing the bill, said that “economically, minimum wages may not make sense,” according to the Sacramento Bee. (He added that labor is more than just an “economic equation.”)

But Humboldt State University Economics Department Chair Steven Hackett disagrees with that assessment. “Generally speaking, I support the minimum wage increase, as an economist,” Hackett said in a recent phone conversation. "This is a real win for minimum wage workers, especially people who support a family, and are in many ways the working poor.”

Hackett said any policy like California’s new wage increase is going to have negative and positive impacts. The two most significant drawbacks in this case, Hackett said, will focus on the sectors and businesses that employ a lot of minimum wage workers.

In Humboldt County, that might include restaurants, big box stores and service industries. Those businesses will have to absorb higher labor costs.

Which could lead to the second negative impact of the increase: “Workers who become displaced or can’t find a job because employers respond to increased minimum wage by trying to get by with less labor,” Hackett said.

Substituting capital for labor — like the mechanizing of labor in the agricultural sector — is nothing new, and the state may see an increase in that as it adapts to higher wages.

Consumers can expect to see slightly higher prices in restaurants, for example, where labor isn’t as easily replaceable by mechanical means.

Hackett said it’s unclear if the North Coast will see outsized impacts of the increase. Industrialized agriculture and other sectors that might see large labor costs or employee displacement aren’t significant in Humboldt County. “Some businesses or service sector firms might argue their economic viability is more precarious [in Humboldt County], because the economy isn’t as robust as the Bay Area,” he said, but that remains to be seen.

Even the positive impacts might be somewhat insulated here. “In my opinion, it’s a bigger deal in urban California where housing costs are so astronomical,” he said.

California Employment Development Department labor market consultant Randy Weaver’s assessment of local impacts differed. “Rather than being insulated, we will feel them more strongly,” he said. “We have a very small-business based economy.”

More than 60 percent of Humboldt County’s businesses have zero to four employees — mom and pop outfits, essentially — that have low margins and will have a harder time absorbing the increased labor costs than big retailers like Target or Walmart.

But while wages on the North Coast may generally be lower than other parts of the state, Weaver said he thinks local businesses often pay employees more than minimum wage. “I think employers understand linkage between good wages and good employees.”

Offsetting the pressure on margins, Weaver said, will be Humboldt residents’ increased purchasing power, the effect of which he thinks could be heightened locally.

That’s because workers in rural areas like Humboldt have a much lower cost of living, meaning higher wages could translate not just to a commute or rent, but to buying newer cars, health or dental care, and grocery and retail shopping.

Some of Humboldt County’s largest employers are its local governments. Eureka City Manager Greg Sparks said he's already identified that next year’s 50-cent-per-hour increase will cost $80,000. The city hasn’t yet tallied up the total impact of the six-year increase, but is working that into its five-year financial plan.

“The impact is greater than simply increasing the positions to the minimum wage due to compaction with other lower paid positions,” Sparks wrote in an email. “We have estimated that compaction really starts becoming an issue when the minimum wage reaches $13/hour [in 2020].

“I think the good thing about the measure is that it is phased in and has an out clause, …” Sparks continued. “I am always concerned about expenses that rise that we as a city don’t have control over, such as pension costs, health insurance, and wages. Some cost increases can be passed on with higher fees — such as in our recreation programs, but higher personnel costs in park maintenance are more problematic since we don’t charge for park use.

“The most important thing for improving the local economy will be job creation. We have a high percentage of entrepreneurship in Humboldt County. Nurturing those business startups will be one of the keys in the years ahead for making our local economy more sustainable.”

Weaver thinks the local negative impacts will be offset by increased purchasing power. Minimum wage has been a “political football,” he said, being called a “massive boon to workers or a disaster for businesses.”

That obscures the reality, Weaver said, which “lies in the middle somewhere.” With years of wage stagnation and inflation, workers have essentially been taking pay decreases. “For workers it will be ultimately be a positive factor,” he said, offsetting the higher wage’s negative impacts.