Synapsis Studio's Future up in the Air 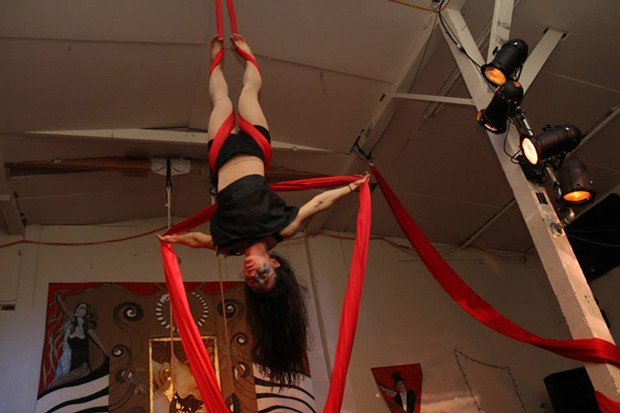 A couple of weeks ago, Synapsis Performance Collective, a group of artists, dancers and performers that has been renting a space at 47 W. Third St. in Eureka for the past 13 years, learned that in six weeks, its rent would be doubling from $1,065 to $2,200 per month as of Oct. 1. It's a substantial hike but maybe not out of nowhere when you consider the original rent was established between 2004 and 2006. As the letter from Synapsis' landlord Gross Family LLC states, "now it's time for this property to yield market rate for the family." That's a market rate that's gone up of late, given that the property is located in "extraction alley," but whether it's a case of cannabis gentrification is unclear.

According to Kristen Goetz, senior planner at the Eureka Community Development Department, 47 West Third St., where Synapsis Studio is located, falls within the inland light industrial zone, the only place within the city where volatile manufacturing businesses of up to 1,500 square feet are permitted. As of now, Goetz says there are no applications for business related to the parcel owned by the Gross Family LLC.

However, over the phone, Joan Van Duzer of the Gross Family LLC says the building's location is incidental. "It's not about the zoning." While she would not comment on the details of previous lease agreements or those of other properties, Van Duzer says, "There's lots of factors that go into business decisions and it's unfair to suggest that the zoning is the reason for the situation Synapsis finds itself in." The zoning, she says, "isn't the driving factor. ... It's their decision to close the program because they don't want to pay market rate." Van Duzer confirms that the building is in fact for sale, part of a plan to gradually sell off the properties she and her sister inherited a year ago when their mother passed away. "We've begun selling off properties, it's part of our plan."

Van Duzer says she feels uncomfortable having a business decision play out so publicly and being painted as a villain. "It's unfair Synapsis is doing this," she says regarding the collective's having announced its real estate plight to the public and the media. While Synapsis has received letters of support and appreciation from individuals and organizations, such as Dell'Arte International, The Gross Family LLC has gotten letters, too. According to Van Duzer, "some of it's been nasty, some of its been kind but pleading, talking about the merits of the program. I've never put the merits of the program in question."

Speaking over the phone on behalf of the Synapsis Performance Collective, Leslie Castellano is disappointed to lose the location, which has been "offering really radical programming and using the space as an incubator" for artists who can't afford their own studio spaces. And while she says she did ask Joan Van Duzer of the Gross Family LLC not to raise the rent, Castellano is realistic. "For sure the building and owner and I have different perspectives. They have to do what's best for their family," she says, acknowledging that the Gross Family LLC could likely make more money renting to other entities, especially cannabis-related ones. "As an artist collective, we have paid the rent late a few times," she says with a laugh, "but we always paid it."

While the Synapsis collective does have a second space in the St. Vincent De Paul building, Synapsis Nova, the group already had programming scheduled through the winter, including a performance of Jane Doe in Wonderland and several artists doing residencies. Castellano says Synapsis Nova doesn't have the room to take these plans on, much less to offer the artists currently using the W. Third Street location's studio spaces, as the newer location pays the bills by running a full schedule of classes.

For now, the group is brainstorming to find a new place — one with lower rent and high enough ceilings for aerial silk performances. On Sept. 10, artists and community members came to the soon-to-be-vacated spot for a cathartic evening of sharing memories and spitballing solutions. The group, Castellano says, hopes to address the Eureka City Council, not to oppose the rent hike, but to see what kind of support might be available for artists who need space to work.

Castellano says she's happy at least to "celebrate 13 years of making weird art in the space." An example of the avant garde projects was the "All Are Welcome" experiment in 2015, in which some 100 people came through the space for 12 hours a day to create a kind of performance of society. Participants were provided with meals, a place to rest, conversation and books to read in an environment of "mutual respect." Castellano remembers it with a little wonder in her voice. "Some people just showed up and made art all day."