About That Alaskan Quake This Morning ... 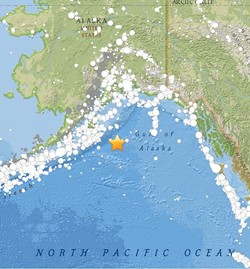 If you are like a lot of people in Humboldt County, you woke up this morning to find out a massive earthquake off the Alaskan coast had triggered a tsunami watch but it was already over.

Local emergency officials want residents to know that they were at the ready to set the alarm after today’s 1:30 a.m. magnitude-7.9 quake struck in the Gulf of Alaska — if the need had arisen.

“Based on available information about the earthquake and analysis by local technical specialists, it was determined that there was not a significant threat to the Humboldt County coastline Tuesday morning and evacuations were not ordered,” according to the Humboldt County Office of Emergency Services release.

That being said, emergency services officials are taking this opportunity to remind residents they can sign up for the Humboldt Alert System, seeing as we live in a region prone not only to large temblors but also vulnerable to tsunamis.


Read the full OES release below:


Around 1:30 a.m. on Tuesday, Jan. 23, 2018 a magnitude 7.9 earthquake occurred in the Gulf of Alaska approximately 175 miles southeast of Kodiak City, Alaska. Due to the proximity and magnitude of the earthquake, a tsunami threat existed along the Pacific Coast.
This earthquake prompted an immediate Tsunami Watch for California and the Humboldt County Emergency Operations Center was activated. In the event of an earthquake and possible tsunami, the National Weather Service has systems in place enabling staff to monitor the situation and assess the level of threat. Based on available information about the earthquake and analysis by local technical specialists, it was determined that there was not a significant threat to the Humboldt County coastline Tuesday morning and evacuations were not ordered.
Because of this, the Humboldt Alert Emergency Notification System was not activated. The Humboldt Alert Emergency Notification system allows the Humboldt County Office of Emergency Services to contact thousands of residents in minutes in the event of an emergency. The Humboldt Alert system is a voluntary subscription. Humboldt County residents must sign up to receive emergency notifications. To sign up for Humboldt Alert, visit https://humboldtgov.org/2014/Emergency-Notifications.
In the event of a tsunami warning for a distant source tsunami, the National Weather Service and the National Oceanic and Atmospheric Administration will send a wireless emergency alert, in addition to Humboldt Alert emergency messaging. Mass emergency notifications and sirens are not intended for local source tsunamis generated by local earthquakes. In the event of strong ground shaking lasting longer than 20 seconds, residents should evacuate from tsunami zones on foot and then check for warnings. The first surge from a local source tsunami could arrive in as few as ten minutes, and surges could continue for 12 hours or longer. Follow the Humboldt County Office of Emergency Services on Facebook (www.facebook.com/HumboldtCountyOES) and Twitter (@HumCoOES) for emergency updates and preparation tips.


Read the USGS tectonic summary of the quake:

While commonly plotted as points on maps, earthquakes of this size are more appropriately described as slip over a larger fault area. Strike-slip-faulting events of the size of the January 23, 2018 earthquake are typically about 230x30 km (length x width).

Large earthquakes are common in the Pacific-North America plate boundary region south of Alaska. Over the preceding century, 11 other M7+ earthquakes have occurred within 600 km of the January 23, 2018 earthquake. Most of these have occurred on the subduction zone interface between the two plates, to the north and northwest of today’s earthquake, including the M 9.2 Great Alaska earthquake of March 1964. The hypocenter of the 1964 event was located about 550 km to the north of the January 23rd earthquake, and the rupture of that event broke much of the shallow subduction zone interface over several hundreds of kilometers. To the southeast of the Alaska Trench, two large (M 7.9 and M 7.8) strike slip earthquakes occurred in November 1987 and March 1988, respectively, several hundreds of kilometers to the east of the January 23, 2018 earthquake. These two earthquakes are not known to have caused any casualties or damage.