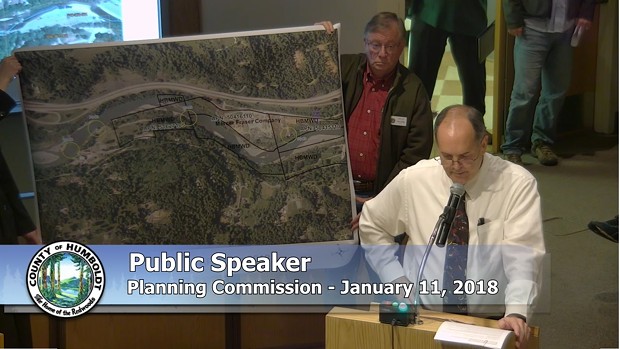 A controversial project that would have created a marijuana extraction plant near the Mad River at Glendale has been withdrawn, John Ford,  director of the County Planning and Building Department, confirmed this afternoon.

The project, which came before the Humboldt County Planning Commission in January, would have rezoned a parcel of land near the Mad River — currently used by Mercer-Fraser Co. as a gravel pit — to accommodate a new extraction facility that would have used butane, propane, CO2, ethanal and isopropanol. John Friedenbach, general manager of the Humboldt Bay Municipal Water District, as well as several staff members, attended the Jan. 12 planning commission meeting to request the rezoning be denied, as they were concerned about the plant's potential to contaminate the majority of the county's drinking water, which is drawn from the Mad River near where the plant would go. When the commission voted 3-2 in favor of moving the project forward, the HBMWD appealed that decision.

Some behind-the-scenes conversations have apparently been taking place because this morning Supervisor Ryan Sundberg announced via Facebook that the cannabis permit and rezoning had been withdrawn.

"I have been working with the company for weeks now, and want to thank Mercer Fraser for a successful outcome," he wrote. Sundberg did not return an email from the Journal for comment.

Friedenbach, reached by phone, said the district was "very pleased."

"I would like to say I appreciate Mercer-Fraser taking action to withdraw the permit," he said. "I also appreciate Ryan Sundberg's efforts. We had reached out to the planning director early on in the appeal process and requested that our district be referred to on projects in the Mad River Watershed."

Ford, who spoke briefly with the Journal between meetings, confirmed his staff has received numerous calls on the subject of the Glendale permit.