The retired FBI agent who protesters have been lobbying to have brought back onto the ongoing investigation into the 2017 slaying of a Humboldt State University sophomore is disputing the implication that he declined the city’s invitation to return.

Protesters effectively shut down Arcata City Council meetings Wednesday and Thursday, occupying city council chambers and disrupting the council’s attempts to impose order with loud clapping and chanting as they continue to demand justice for 19-year-old David Josiah Lawson, who was fatally stabbed at an off-campus party April 15, 2017. The protesters’ primary demand has been consistent: Bring back Tom Parker.

A retired FBI agent, Parker had been offering his consulting services pro-bono to aid the Lawson investigation until he stepped away in April of this year, alleging that the police department had refused to heed his advice in the case, was making little progress and had lied to him about aspects of the investigation. Less than 24 hours after Parker’s resignation, then Police Chief Tom Chapman abruptly followed suit.

During Wednesday’s council meeting, City Manager Karen Diemer indicated she would reach out to Parker in an effort to quell the protests. Then, after Thursday’s meeting adjourned prematurely in the face of another 30 or so protesters, Interim Police Chief Richard Ehle offered an update on the investigation and answered protesters questions for about 20 minutes.

Ehle told the group that the city has poured an additional $100,000 into the investigation, and has brought on six detectives and case analysts in recent weeks. He said he hopes to have a “good chargeable case” to forward to the Humboldt County District Attorney’s Office within six to eight weeks. When the conversation turned to Parker, Ehle seemed to imply that Parker had declined an offer from Diemer to return to the investigation.

“We talked to Tom Parker today and he agreed when talking to Karen that, with the forces we have martialed, the cooperation with the DA’s office, the letters we’ve sent to the FBI, the Department of Justice, that, he said, ‘You might as well keep going with what you’re doing because I can’t be of further assistance,'” Ehle said Thursday.

Reached by the Journal, Parker disputed that he said any such thing.

“I never said that,” he said. “I never would have said that because I think that I do (have something to offer the investigation). I do think that there are things I have to offer but, at this point, they haven’t asked and I haven’t offered, so I’ll keep my fingers crossed that the people they’re bringing in do have that knowledge and those skills.”

Parker said he’s glad Arcata is finally throwing additional resources at the case, though he questioned why it took more than a year to assemble a team of outside investigators. He also bristled at Ehle’s characterization of him Thursday as just a “white collar” crimes investigator.

“It’s obvious that he has not done his homework,” said Parker, who works as an expert witness on police procedures in homicide cases. “There’s no way I’d be certified to testify in courts throughout the state and the nation on police practices and homicide investigations if I didn’t have the experience and the training.”

Ehle said a few other things of interest Thursday night, including his assertion that it was “lucky” the murder charge against Kyle Zoellner — the 24-year-old McKinleyville man arrested at the scene and charged with Lawson’s murder — was dismissed without prejudice because it means he can be re-charged again in the case. The comment seems to suggest that Zoellner remains the investigation’s primary suspect. 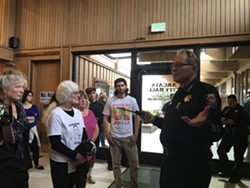 The interim police chief also made some comments about how he’d like to see the case progress when or if criminal charges are filed.

“I will tell you this, we are looking at a potential change of venue,” he said. “We are also looking at bringing in a career prosecutor to assist us on the case. If [the district attorney’s office] would acquiesce to that career prosecutor helping them prosecute the case, then we might have a bargain. … I think I’ve got this city talked into probably paying for it. I’d rather the DA pay for it — that’s their responsibility as far as I’m concerned.”

Reached via email Saturday, Fleming seemed surprised by Ehle’s comments and dismissed the notion that the case would require bringing in an outside “career prosecutor.”

“I have not had any conversations with APD about a change of venue nor about bringing in an outside prosecutor,” she wrote, adding that she doesn’t see “any benefit” to talking about a potential change of venue with no case filed. “The Lawson case has not been, and will not be, affected by any limitations on the capability or capacity of the Humboldt County District Attorney’s Office — one additional murder case would not cause any such limitations. Our office includes a number of attorneys very capable of prosecuting murder cases, as evidenced by recent results. We will proceed with the filing and prosecution of all the cases we are responsible for when admissible evidence allows, unless an excellent alternative such as prosecution by the U.S. Attorney General’s Office is made available.”