HSU Student Swept Away Described as 'Sweetest Person Ever' 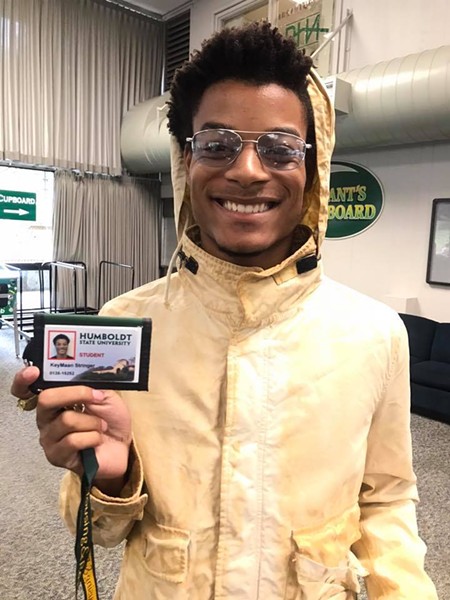 When professor Rae Robison first met KeyMaan Stringer during the orientation for incoming students in Humboldt State’s Department of Theatre, Film and Dance in August, the 19-year-old freshman immediately stood out.

“He came over and said, ‘I just want to thank you. I’m so excited,’ and he hugged me and I’m not a hugger,” Robison recalled today. “Then, every single time I saw him on campus, he would yell, ‘Rae,’ and he would give me a hug.”

He was just “the sweetest person ever,” she said of Stringer, who arrived in Humboldt County from Los Angeles to begin classes just two months ago.

The U.S. Coast Guard scoured 160 square-nautical miles for 16 hours before suspending the search for Stringer, who was swept off the North Jetty while fishing with fellow students Monday afternoon.

Humboldt State University is proving counseling for members of the campus community who need assistance. Find more information here. Read an expanded story about Key’Maan Stringer and the lives he touched in his short life here.

“I have just never met anyone who was so joyful every time you met him in my life. Ever,” Robison said, just after hearing the news about the search being suspended. “It just breaks my heart.”

She said he auditioned for a part in the department’s production of Evil Dead: The Musical, which she is directing, and was fine when he didn’t make the cast, telling her, “I’ll do better next time.”

Robison said she had been trying to get in touch with Stringer for about a week to schedule a time to sit down and talk about his plans for next semester.

“Now,” she said, her voicing catching, “that won’t ever happen.”