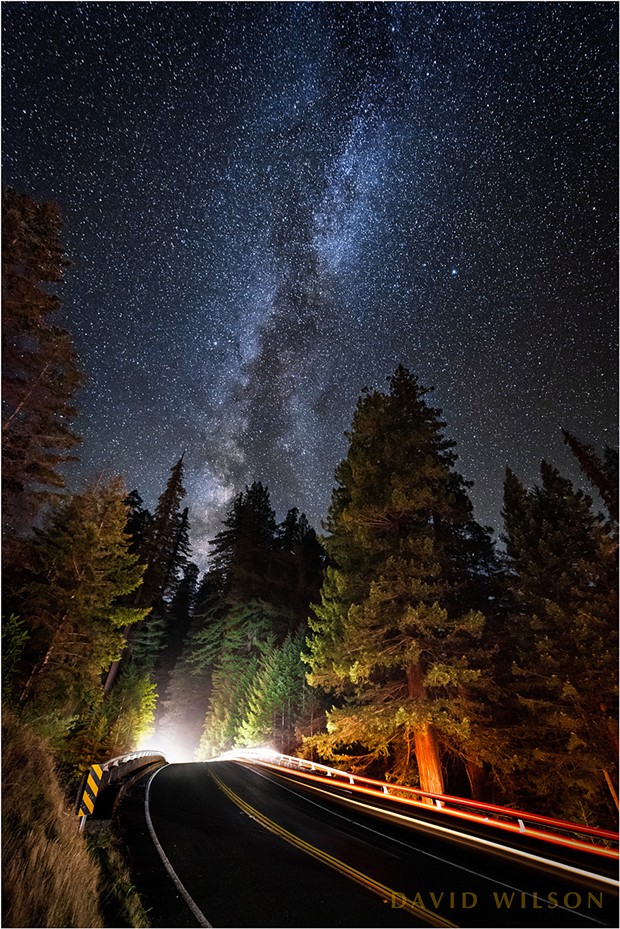 The Avenue of the Giants is as beautiful a drive as you will find. The groves along its 36-mile course line the Avenue with some of the grandest examples of the tallest trees on Earth, the California coast redwood, Sequoia sempervirens. Some are thousands of years old. If a disproportionate number of my photographs are taken along the Avenue, it is only proportionate to the beauty that is found there. The image I’m sharing today was photographed from the hillside just off the road near the California Federation of Women’s Clubs Grove, one of the special places found in Humboldt Redwoods State Park.

This particular view of the Milky Way rising just so above the road is only visible for a few days of the year. Why is this? Well, we know Earth orbits the sun, going completely around it in one year. This means that each day Earth’s night side is presented with a slightly different view of the cosmos as we travel around the sun, and as our view of the universe changes, the position of the Milky Way in our sky also shifts a little every night. The most spectacular part of the Milky Way, that area nearest the Galactic Core, is now almost entirely beneath the horizon after dark and we will see less of it each night until the return of “Milky Way season” next spring, when we will again be treated to more of the Core in the night sky.

I waited for months for a night when the Milky Way would rise from the horizon above the bend in the road at this spot. In my mind’s eye, the lines and curves of the road, the trees and the Milky Way would line up and interact interestingly, and, together with light painted in by passing cars, would make a good composition. And then, as so often happens, elements beyond my control intertwined with my own endeavors, with results that exceeded my expectations. I had planned to let passing cars bathe the scene with light but I could not control how they laid their strokes of light. I don’t think I could be happier with how it worked out, and again I thank the universe.

My brother Seth came with me again on this night. We parked at a turnout and had planned to climb up the hillside to get a higher view, but it was a great deal steeper at night than I’d remembered. Instead we climbed up only enough to be safely out of the way of any cars. I hadn’t realized how few cars there would be, but here at the thin end of the tourist season only three cars passed us in the 90 minutes or so we were there. Two of them added light to this image.

The light on the road and trees comes from three sources in total. A truck slowly approaching us from the south caused the bright white glow at the end of the Avenue, as well as the light on the trees nearest the glow. The exposure ended just before the truck came into view. Then the taller redwoods to either side of the road were illuminated from below by the passage of an unknown number of cars beneath the bridge on U.S. Highway 101. The red streaks along the right side of the road are the taillights of another car that passed us from the north. The taillights became streaks as the car passed by during the long exposure. That car was the primary foreground light source. Finally, I added a touch of light on the surface of the road with my flashlight between passing cars.