The Humboldt State University bells rang loudly across campus, 12 rings, it was noon and a group of people were walking toward the library. Upon entering the jam-packed lobby filled with HSU faculty, students and community members , the crowd began to applaud: The new president had arrived.

Just a few hours after his announcement as the new president of HSU, Tom Jackson Jr. was ready to greet everyone who came to get a first impression. After about 20 minutes, Loren Blanchard, executive vice chancellor for Academic and Student Affairs for California State University, introduced Jackson and his wife.

“We welcome the opportunity not only to reside in this community but do all of the things we hope will happen over the next several years,” Jackson told the crowd. “So please, as we go through this process, I ask you seriously and deliberately to take the time to stop me and let’s chat. You could buy the cup of coffee (he said jokingly), but tell me your story because, for the two of us, that story is really what’s most important.”

Jackson then went on to tell a story of a university and how it is supposed to aid its students. 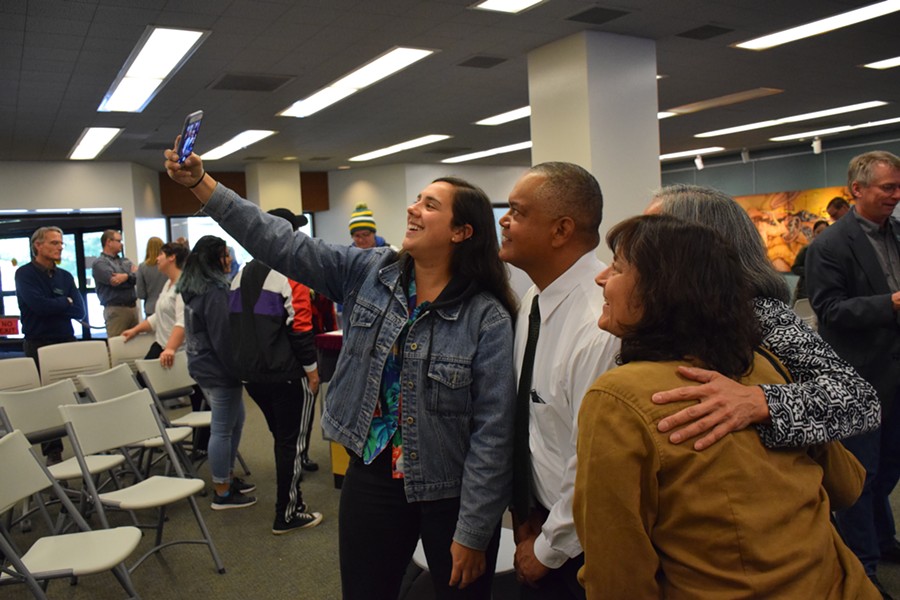 Jackson not only made history as HSU’s first black president but he is also the first president in the CSU system to be at his new campus on the day of his announcement.

“There’s a precedent being set today,” Blanchard said, “there has never been a time, in the history of California State University that on the day the announcement is made of a new president, the president is actually on the campus. ... President Jackson and his wife wanted to make it clear to you all how important this university is to them.” When the Journal asked about his plans for HSU, Jackson reiterated that his most important concern is its students.

“This is a wonderful place and I’m the eighth person with the keys to keep that going,” he said. “My biggest priority is the students and providing them with a meaningful and positive experience here. They chose this campus, this wonderful place to live, and we want to make sure they leave here as a graduate. If you ask me this question again in a couple weeks, a couple months or years, it’s going to be the same answer.”

Given the recent budget cuts, including the slashing of KHSU and the elimination of the football team, Jackson said there is a “great amount of conversations on healing” going on in the president’s office.

When asked about what he likes about HSU Jackson said, “I’m from Washington State. When you put oceans, forests and mountains together, that’s it.”