An Ignominious Opening Weekend for the Crabs 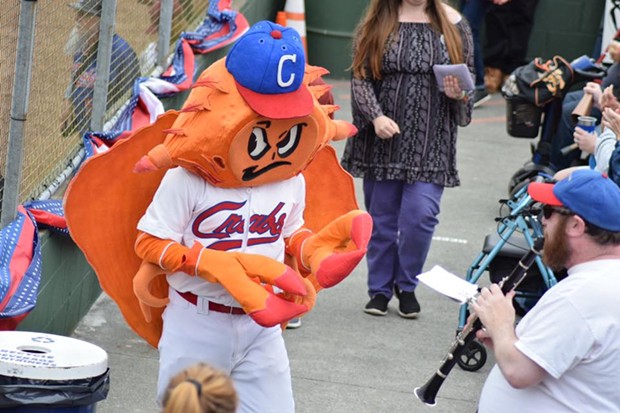 You wouldn’t know it from the sky but summer is here and in Humboldt that means it’s Crab season once again, baby! Yes, folks, the best time of the year has arrived and our favorite decapods took the field this past weekend against the Corvallis (Phil) Knights.

It was a bespoke nightmare tailored with stranded runners, sleepy fielding and quiet bats. The Crabs dropped all three games and now sport a losing 0-3 record for the first time since the dawn of man. Just writing it makes me sick, brings a tear to my eye.

But I will not wallow in despair. It’s a long season, the sun soon will shuffle off its veil and shine down on us, and there is great cause for optimism. We’ve a total of four local boys gracing the diamond for us this year: pitchers Dylan Campbell and Wyatt Tucker, catcher/first baseman Aidan Morris (from the B52s), and everyone’s favorite utility infielder Koko Figueiredo returns to us. The team is still waiting on nearly a dozen players to arrive, who will trickle in as their college seasons come to a close. Hopefully bolstered ranks will prove benefit to the season.

Friday and Saturday’s games were formulaic beatdowns. The Knights simply could not be kept off the bases and sauntered into 8-3 and 9-3 victories, respectively. It was a humbling and decidedly un-fun experience being on the receiving end of a thorough, casual whooping — it is usually the Crabs doing the stampeding (I am reminded of more than a few 15+ run games put up last season). I hope, for all our sakes, neither the team nor the fans have to experience it again for some time. We just don’t deserve it.

Sunday, well, Sunday was a different type of game. Davonte Butler took the mound for the start. He’s a thin, sinewy dude who wears his pants cuffed above his knees and throws one hell of a fastball. Butler cranked out four hitless innings and 6.5 scoreless before getting the hook. The Crabs put one on the board first, in the sixth inning. Infielder Kyle Knell hit a lead-off single, advanced on a fly-out and was brought home by a Bryce Kirk single. Kirk currently leads the team in RBIs and batting average, but it’s early days yet and baseball stats are notoriously volatile in small samples. One-nil Crabbies.

Alas, the lead was not long for this world as Corvallis put up two runs of its own in the top of the eighth inning. As to be expected, they’re a good team and won’t roll over so easy. But neither would our Crabs. Two consecutive hit jobs and a breezy walk loaded the bases with no outs in the bottom the ninth. Hecklers erupted, the bleachers screamed with hundreds of pounding feet.

And then the Crabs snatched defeat from the jaws of victory. Outfielder Carter Thompson chased an outside pitch and looped it right back to the pitcher who caught the stab and caught Morris heading the wrong direction for the double play. A listless ground out to second base and our dreams of a comeback were dead in the water. The remaining stalwart fans slunk down the new bleachers and onto F Street, solemn as a funeral procession.

While I’ve got you here, a few thoughts on changes at Crabs stadium: Round Table Pizza instead of Westside? Good. The Booth IPA available for purchase? Very good. Still no wine or cider for those fearful of or averse to gluten? Less good. The Arcata Ballpark ought be baptized in the ways of the grape and apple.

And the new bleachers we’ve been hearing about for so long? About those I am decidedly unsure. They are easier to navigate with beverage or food in hand, kinder to those with limited mobility and, as one particularly astute fan noted, much more resonant. But they’re smaller (down about 200 seats from the old ones) and there is only one aisle per grandstand — one mode of egress. You also can no longer see foul balls smash cars parked on the east side of F Street, which is a drag. With them comes a new announcers booth but it’s just shoved in front of the old one, which has been relegated to a boarded up eyesore. Fourth of July and Father’s Day are going to be … interesting.

Crabs are hopping over to Redding for two-game sojourn this week, returning for a three-gamer this weekend against the Seattle Studs. Friday and Saturday games are at 7 p.m., Sunday matinee at 12:30.

Heckle of the Week

First winner this year goes to Hubie from the band for his incisive observation that one Knights player was “like a ball player only smaller!” Randy Newman would approve.

Cheers to a new and exciting Crabs team. We’re all stoked to root for y’all this summer.

Jeers to heckle repeaters. Please don’t copy people or say same eight things over and over and over. And over. Give us some variety (the best of which, sometimes, is silence).

Cheers and Jeers to the gentleman who hopped the fence and ran across the field this weekend. It’s whack to interrupt a game with your streaking if you’re not even going to commit. And yet I am firmly pro-streaker. It’s so dumb and fantastic.

Jeers to the young ladies in front of me Saturday who spent the entire game on Snapchat. Not even jeers, really, just — why?